We sat down with Shaun Clouston, head chef and co-owner of Logan Brown, to get his top barbecuing tips.

To avoid another summer of burnt chops and undercooked sausages George Block sat down with Shaun Clouston, head chef and co-owner of Logan Brown. Shaun’s earned himself a reputation in the capital as a bit of a barbecue virtuoso thanks to his latest burger restaurant Grill Meats Beer. He shares his top tips for great grilling.

Shaun I’m ashamed to admit I’m currently running a bargain-bin four-burner that flares-up constantly and suffers from serious hot and cold spots. How do I get the most out of this lemon?


If you’ve got a few bags of those pre-cooked Heller’s sausages – the Honey and Soy ones are outstanding – you can stop flare-ups by cranking up all the burners to high with the hood down to get it really hot, then shutting the flame off and chucking all the sausages on. If you leave the hood down, an iron grill will stay hot for ages and there’s no risk of fat drips causing flares.

The other thing is that with lots of meats you should be cooking really low, with very little flame, and quite slowly. For example, even high-quality lamb chops will contain a decent amount of fat, which needs time to break down, so you want to cook them low and slow.

As for the hot and cold spots, you’ve got to use them to your advantage by throwing pre-cooked sausages that just need a quick blast on the hot spot while leaving more delicate food, which needs a lower heat, on the cooler areas.

Purists sometimes scoff at gas grills and say the only way to get decent flavour is with a charcoal- or wood-fired barbie. What do you use at home?

Almost always gas. I don’t look down on it at all, it’s what I use at work every day and it’s not hard to get great flavour with gas. To spice things up I often grab a few olive branches from the garden, whack them under the grill above the burners, and they generate a nice sweet smoke that adds a great Italian taste and really complements herbs like thyme.

What are some commonly neglected foods that more of us should be barbecuing?

Vegetables! Grilled whole corn cobs are a classic Mexican street food. Serve them with chipotle cream, lime and butter. Also, heaps of people don’t realize how well asparagus goes on a barbecue. The best way is to grill them on bamboo skewers – oil all the stalks then put two skewers through at each end.

Anything that really makes you cringe when an amateur is behind the grill?

Pricking sausages is a massive one. You can get away with it, but you’ll lose a lot of flavour and any sausage worth its salt isn’t going to need pricking as long as it’s cooked right. It’s no good when you see someone throw meat straight off the barbie on to the plate – you need to let it rest for 10 to 15 minutes, either on the barbecue’s warming rack or in a pre-heated oven. It’s also not a good idea to chuck meat straight out of the fridge right on to the grill. If it goes on cold, it’s going to be harder to cook evenly all the way through without charring the outside.

You should never leave your barbie unattended. One New Year’s I was roasting a whole duck on my barbecue’s rotisserie and the spike slipped loose from the motor when I popped inside for a minute. When I returned there was two metres of flame coming off of the bird, which had set fire to a nearby tree. Could have been a lot worse, and it was also impossible to find another fresh whole duck on NYE in Wellington!

A big mistake you can make when cooking mussels or scallops is to overcrowd the grill. You need to cook in small batches otherwise you’re going to draw all their juices out at once and they’ll be boiling away, which will stew them and is never a good look.

My favourite thing to barbecue is seafood, but too often I find the fillets come apart when I try and peel them off the grill, no matter how liberally I oil them. What am I doing wrong?

The key thing is getting your grill bars absolutely clean, even if you’ve just been cooking steak beforehand – so it’s a good idea to cook the fish first while ensuring it’s evenly oiled. In fact, non-stick barbecue plate covers work really well as a way to prevent fish sticking. I looked down on them at first but now I think they’re a brilliant way to get good colour on the fish and even grilling, especially when roasting a whole fish on an old unevenly heated barbie.

What would you recommend to get beyond the usual salmon and snapper fillets?

Something that New Zealanders really don’t barbecue enough is the little yellow-eyed mullet. Our vege suppliers use a fresh masala paste with lemon to saute the fish and it’s just beautiful. In a similar vein, whole sardines go well on the grill served with a bit of chargrilled toast.

Another favourite of mine is cedar-smoked salmon. Get yourself a big cedar plank from any BBQ store and chuck it on the grill. Once it catches, chuck the whole salmon on for about fifteen minutes then serve on a platter with citrus.

It sounds like you think there’s a bit of room for improvement on the standard Kiwi sausage sizzle.

Other cultures really do have it down a lot better than us, especially when you look at the American South where they have secret blends of timbers to get the perfect smoke. But I think the best barbecuers in the world are the Brazilians with their Churrasco cuisine.

The other thing is why bother with a bag of beef-flavored sausages – a summer barbecue is a great excuse to spend a bit more and get something special. And I wouldn’t throw anything on the grill unless I knew where it came from. For example, we only use lamb from Coastal Spring Lamb, who have a beautiful farm up in Turakina, which is only available from October through mid-January when the meat’s best. 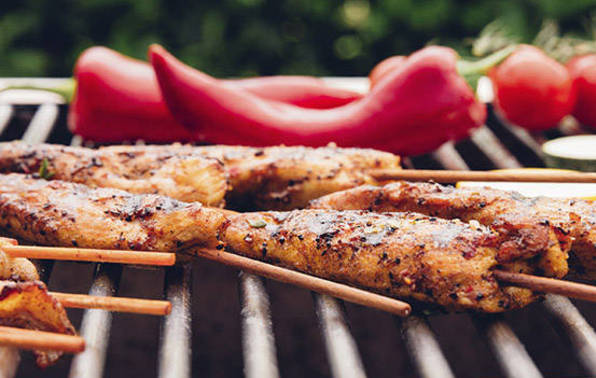