Find out what you can expect to pay for dental treatments.

Do you grit your teeth in anticipation of the dentist’s bill? To help ease your pain, we've investigated the average price of a check-up in Auckland, Wellington and Christchurch.

Book a check-up at a dental practice and you’ll probably expect 3 things: an exam where the dentist looks, pokes and prods; a couple of x-rays; finishing with a short clean and polish.

However, our latest survey found the third step of this standard check-up – the short clean and polish – is increasingly being replaced by a pricier clean provided by a dental hygienist.

We surveyed 51 practices in Auckland, Wellington and Christchurch to find the cost of a check-up for a new patient and which services the appointment included. At 37 practices, the basic clean wasn’t included with the exam – an additional appointment with the dentist or hygienist was required.

Of 15 practices we called in Auckland, none offered a standard all-inclusive check-up.

This means patients face a choice following their dental appointment: no clean at all, or a separate cleaning session costing $145 on average.

Then there’s the added inconvenience. When our mystery shopper went for a first-time check-up at a Wellington branch of the Lumino The Dentists chain, she had to wait 5 weeks between the exam with the dentist and the clean with the hygienist.

A basic clean as part of a standard check-up typically takes about 10 minutes, whereas a separate cleaning session can last between half an hour and an hour, depending on the practice.

Dr Crum says his practice, “like many”, offers all-inclusive check-ups – with a 10-minute clean and polish – as well as separate, longer cleans for those who are advised to have one. Patients can book these cleaning sessions on a more regular basis than a check-up.

If a practice will only provide you a clean in a separate, lengthy and expensive appointment, “it’s time to ask around”, Dr Crum says.

Customer convenience is also important, he says. “There are ways to coordinate a single trip to the dentist with a hygienist’s appointment.”

If you don’t require or want intensive teeth cleaning, paying for a separate cleaning session can double your bill.

In the capital, 7 practices offered an all-inclusive check-up, costing an average of $113. Across the other 13 practices we contacted, customers had the option of spending $120, on average, for an exam and x-rays only, or $285 for the full works (exam, x-rays and a separate clean).

Seven practices in Christchurch also offered all-inclusive check-ups, at an average cost of $145. At the other 9, on average you’ll pay either $109 (exam and x-rays but no clean) or $239 (exam, x-rays and the separate cleaning session).

Cleaning sessions aren’t the only extra expense creeping in: 9 of 51 practices charged extra for x-rays taken during the check-up. Dr Crum says all dental practices must meet minimum mandated standards, but factors such as rent affect the prices charged.

Two Auckland practices our surveyors spoke to charged nothing for a check-up (though you’ll need to pay for a clean).

Dentist Scott Waghorn offers free exams and x-rays at some of his Smilecare practices in lower socio-economic areas in Auckland. He believes dentistry costs are prohibitive for the majority of Kiwis, and free check-ups “reduce barriers of entry so people can come in and see what’s needed”.

He says owning a larger company helps cover costs, but offering services at prices communities can afford has boosted his business over the long-term.

Our surveyors also asked about the range of prices for a filling. The majority of practices were happy to give our caller a rough guide.

Three dental practices in Auckland and 1 in Christchurch refused to give an estimate. We think this is poor. While practices may not be able to give a quote without a dentist taking a look, they should be able to provide their price range to help people budget and avoid a higher-than-anticipated bill (see “Paying the bill”).

A factor influencing price is whether the practice offers both amalgam (silver) and composite (white) as filling materials or just the one type. Amalgam fillings are generally cheaper but composites look more like a natural tooth. 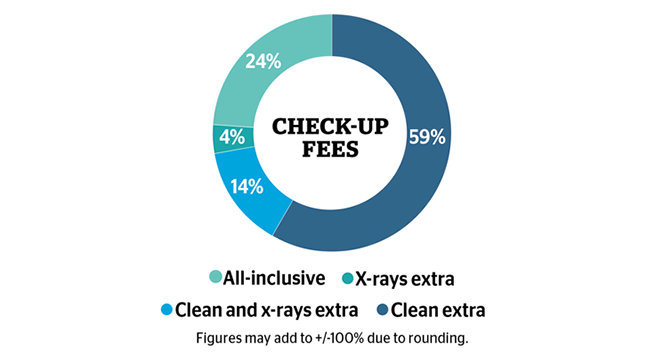 GUIDE TO THE TABLE AVERAGE COST based on estimates provided in a phone survey conducted in Auckland, Wellington and Christchurch in September and October 2017. One Wellington dentist declined to give price of clean. If a price range was given, the midpoint was used in the calculations. NC = not able to be calculated.

Are we getting strung along?

“Flossing is the number 1 thing I want my patients to do,” a Lumino The Dentists dental hygienist told our mystery shopper.

However, the last time the Cochrane Collaboration (which conducts systemic reviews on healthcare) looked at the evidence for flossing, it found “weak, very unreliable evidence of a possible small reduction in plaque” and “some evidence” for the prevention of gum disease. The review also described all research trials as poor quality. The evidence for interdental brushes has also been deemed “low quality”.

Although dentists and hygienists typically advise their patients to floss, few studies have looked at the benefits for people free from oral disease.

In comparison, the group found much stronger evidence for other interventions – such as fluoride mouth rinses for children.

University of Otago dentistry professor Warwick Duncan says some people may never need to floss – but it’s currently impossible to separate them from those who do.

This is because your risk of developing cavities or gum disease depends on your daily brushing regime, tobacco use, number of fillings, diet and general health but also hidden factors such as genetics, he says.

“There is going to be an element of over-prescription. However, the preventative treatment is cheap and easy whereas the treatment once you develop oral disease is costly, difficult and not always successful.”

Professor Duncan says dentists also push their patients to brush and floss regularly and correctly because they are thinking of their general health, not just their teeth. Poor oral health is linked to heart disease, stroke and pre-term births, he says.

The Consumer Guarantees Act applies to any service provided to consumers, including dentistry.

Under the act, dentists must provide services that are fit for purpose and done with reasonable care and skill.

If you think your dentist has failed to meet these standards, you can take them to the Disputes Tribunal to seek compensation. To make a claim you’ll need proof (such as the testimony of another dentist).

Your other option is to complain to the Health and Disability Commissioner (HDC) or the Dental Council (DC). These organisations can also investigate complaints about the conduct of dental staff and breaches of patient rights. The organisations may work together to investigate your complaint – and can point you to the most appropriate organisation to lay a complaint with. Neither the HDC or DC can order financial compensation.

Paying a large dentist’s bill can be as nerve-wracking as the sound of the drill. Perhaps with this in mind, some practices advertise financing through schemes such as Q Mastercard, offered by Columbus Financial Services.

These cards come with a $55 establishment fee and a $25 account fee every 6 months. A $300 filling at Lumino will have turned into $430 when the first payment is due – and that’s before you add interest.

You’ll face rates of 25.99% per annum after that – that’s nearly double some low-rate credit cards. Interest rates of many credit cards from the 5 banks sit at 20.95%.

If you use credit, make sure you pay the amount within the interest-free period.

If you’re looking for a dentist, we recommend asking what they include in a check-up. If cleaning and x-rays are extra, ask for these costs as well. Whether you’re a new patient or not, it’s important to find a dental practice open about the prices they charge. You also want a practice that meets your needs: you shouldn’t have to pay for a pricey follow-up appointment with a dental hygienist if your teeth only need a basic clean.

In 2017, 50 dentists across the country provided free treatments for Community Services Card-holders during 12 days in September. The event, run in association with Southern Cross, launched in 2015.

How to buy hearing aids