The taste of chargrilled barbecuing in just 15 minutes? We checked it out.

The Everdure eChurrasco is a dual-fuel barbecue. You can cook using gas or use the gas ignition to fast track preparing charcoal briquettes for that distinctive chargrilled flavour. The manufacturer claims this will take you from “zero to hero” in just 15 minutes, but will it?

The eChurrasco has 2 burners and its compact size means it’s great if you have limited space. On the downside there’s no handles so its 18kg can be awkward to move around.

The hood doubles as a wind protector at the back but you can’t cook with the lid on. There are 3 hangers for utensils (but these can’t be used when the barbecue is on a table). A trolley and solid sizzling plate are also available but you may have to pay extra for them depending on the package.

To cook using the chargrilled method you heat the charcoal briquettes using the gas ignition. After 8 minutes you turn off the gas and the briquettes reach optimum cooking temperature less than 10 minutes later – a fraction of the time it usually takes to heat them.

We cooked 15 sausages using gas-only, followed by the chargrilled method. Then we repeated the process using 3 pieces of steak.

The biggest problem with both methods was that the only effective cooking area was immediately above the burner. This meant some sausages were raw and others were overcooked. When we cooked with the briquettes, fat dripped from the sausages on to the briquettes causing them to smoke.

Cooking steak wasn’t much better. The gas-only method resulted in very uneven cooking, and when chargrilling fat dripped on to the briquettes causing a fire which burnt 2 of the 3 steaks.

Overall less than 50 percent of the grill provides an effective cooking area – you’ll have to rotate the meat and use the other areas to keep other pieces of meat warm.

The eChurrasco was easy to use. The controls were excellent with easy ignition. It was also very easy to light the briquettes. Cleaning takes some effort with scouring pads and soapy water. If you use the chargrilled method you’ll need to get rid of the briquette ash after each meal, which may become a hassle.

The eChurrasco takes some of the time out of traditional chargrilling but at around $500 we don’t think it lives up to the hype. 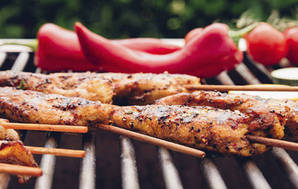