How many cameras does a phone need? Huawei thinks the answer is three, and frankly, the results are hard to argue with.

The Huawei P20 Pro takes excellent “real world” photos. I’m using that description because while it did well in our lab tests, those use studio shots that determine how closely the phone’s camera replicates a scene. It doesn’t represent what it’s like taking a photo at 11p.m. in a bar with your friends, or in the great outdoors and the sky looks amazing, or when you want the food you’re eating to look vivid and mouth-watering. This is where the P20 Pro shines.

Each of the three cameras has a different function. One camera takes RGB-colour images and another captures monochrome images, along with contrast and shadow. The third camera has a telephoto lens, so it collects image detail from further away. When you snap a shot off, the Pro combines the three images into a single photo. (Note, while the P20 Pro has three cameras, the P20 only has two, so no telephoto lens).

I’ve taken some stunning photos with this phone. It’s easily the most impressive phone camera I’ve ever used.

Even the automatic shots are stunning. I snapped a shot of my backyard at night using just the auto settings and got a surprisingly great photo. 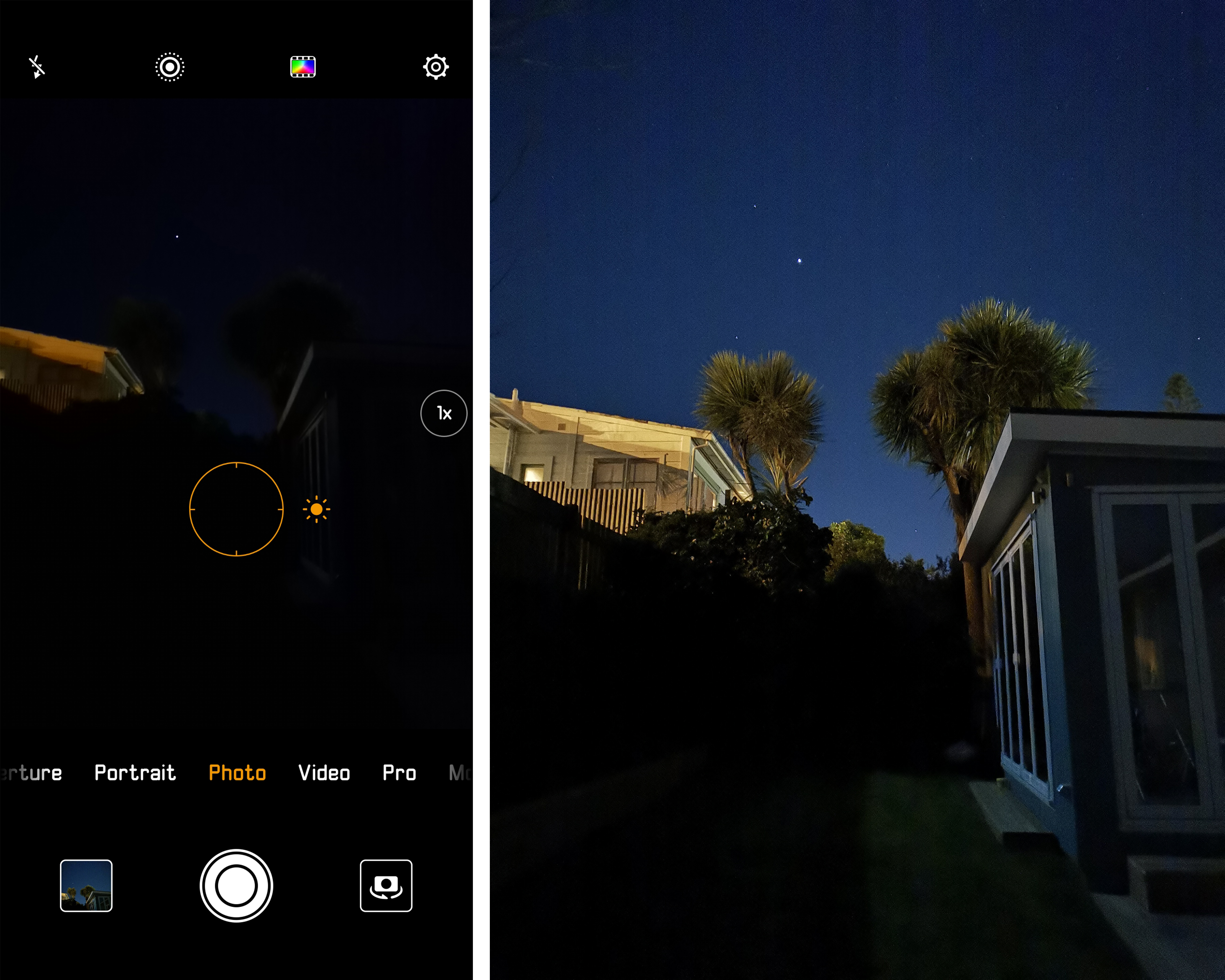 Left: on screen before taking the shot. Right: the resulting photograph.

Its “Pro” controls allow more fine adjustments than any other phone I’ve used. Moreover, the “Nightshot” mode takes a dark scene and lights it up. Despite the shutter being open longer, this mode is stable enough that you can do this while holding the phone without getting blurry photos.

My most impressive photos used the “Star trail” mode.

I set the phone up on a makeshift tripod on a cloudless night and captured the stars as they moved across the sky, while the foreground remained perfectly exposed. The images were as good as I’d expect from a DSLR camera. 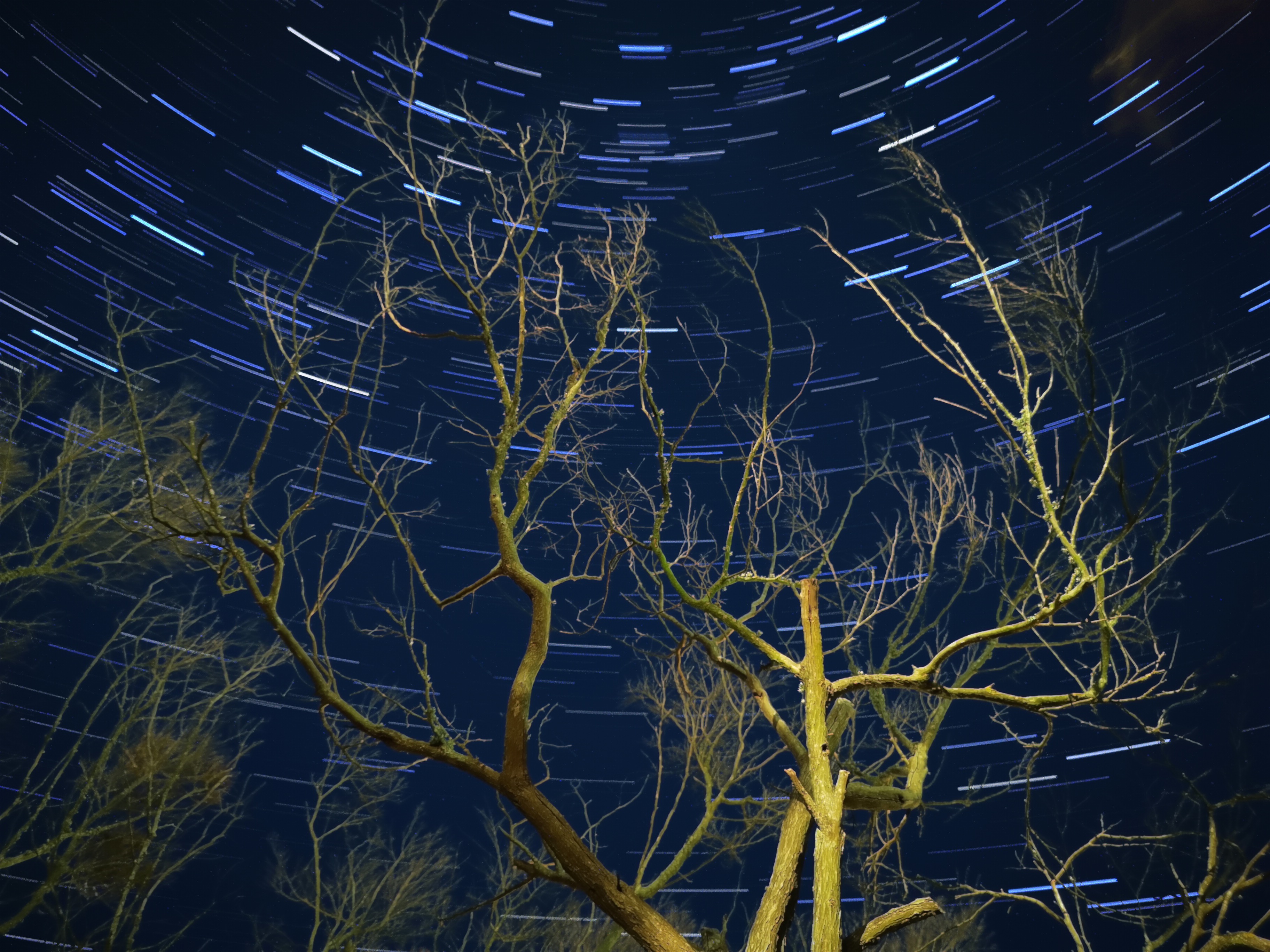 However, while the rear cameras are amazing, selfies taken with the P20 Pro were disappointing. The colours looked washed out and not lifelike. There wasn’t much help from the “3D” portrait mode, which uses artificial intelligence (AI) to figure out the shape of your face and alters lighting effects in the shot. While the detail is there (24MP), the vibrant colours aren’t. So to make them look good enough to share, I had to do some quick editing.

The P20 Pro has more tricks up its sleeve than just impressive cameras.

Taking a leaf out of Apple’s book, the P20 Pro has a face-unlock feature that works nearly every time. It’s fast and has no problems if you’re wearing sunglasses or spectacles. Unlike the iPhone, the P20 Pro has kept the fingerprint sensor, meaning you’ve got a back-up option if the face system doesn’t work.

Another similarity to the iPhone X is a “notch” at the top of the screen where the front-facing camera and speaker are located. If you don’t like the notch, there’s a setting that hides it with a black bar.

The processing power has been updated, and augmented with the same AI inside the Huawei Mate 10 Pro. The AI does various tasks in the phone, including increasing the battery life. It learns your habits, and then manages your apps in the background, which extends your charge beyond a single day. One time I forgot to charge it overnight, and the phone still got me through most of the next day.

However, no phone is perfect, and I did have a few big issues with the P20 Pro.

Bluetooth connectivity was a real problem. I use wireless headphones most days and the connection would drop out if I had the phone in the pocket of my jeans. It also cut out if I placed my hand on the top of the phone. As the P20 Pro doesn’t have a headphone jack, you’ll often be relying on Bluetooth.

My other problem was an issue with Google Maps that affected all Huawei phones. The glitch caused Google Maps, and apps that use it such as Uber, to give an error message. The fix required opening the app settings on your phone and deleting the cache from Google Play Services. It wasn’t too techy a fix, but not that simple either.

Despite the issues, the P20 Pro is one of the three best phones in the market right now (the others being the iPhone X and the Samsung GS9. Each of these phones has advantages and disadvantages; the Huawei’s biggest pluses are its cameras and price, while its poor Bluetooth brings it down a notch (no pun intended).

While I can’t say it’s the best phone on the market, I can say that with its iridescent blue back, it certainly is the prettiest one out there.

The P20 Pro was loaned to the writer by Huawei.

First Looks are trials of new and interesting products from the perspective of our product experts. Our lab-based tests offer truly objective product comparisons.

Cars, phones, infomercial products and anything else that takes our fancy — First Looks are trials of new or interesting products from the perspective of our product experts. Check out our latest.