With a design that’s easy on the eyes and comfortable in the hand, the Huawei P8lite is a solid phone that won’t break the bank.

This phone is one of the most comfortable phones I’ve used. It wasn’t so thin as to cut into my hand when held for a long time, but was light enough I often had to check my pocket to make sure it was still there.

For a budget phone, its screen quality was impressive. It has a 1280 x 720 resolution screen and I found the picture so good that images almost looked 3D. The screen was bright, resulting in seamless indoor-to-outdoor use.

I thought the sound quality was good, until I was told by people I was calling there was a constant and irritating scratchy noise on their end. I checked this by calling my own phone, and yes, there was an annoying background noise. After some investigation, I discovered the handset had a slight rattle that could have been causing this. While it may seem only a minor annoyance, it was enough that some people wanted to end the call with me as quickly as possible. Note: this may have been a fault only with this handset.

The P8lite I tried lacked near-field communication (NFC) capability, which surprised me. Huawei state on its website that some P8lite models do come with NFC (see Note below), so if NFC is important to you, check a model has it before buying. I use NFC on a daily basis to check and top up my Snapper bus card balance. It’s also used in some mobile wallets and for home automation.

Its cameras are good quality and took sharp images, but its rear 13MP camera is a little close to the phone’s edge, which meant I occasionally ended up with a finger in shot.

The P8lite has a battery-conservation app that alerts you when an app or service is using lots of your battery power. While this sounds great, it often popped up a notification telling me an app was using lots of power while I was actually using the app, which I found very frustrating. After turning off this feature, I didn’t notice a significant drop in battery performance. However, I found the handset could get too hot to hold while using battery-intensive apps.

My only major issue was the scratchy background noise on calls, but this was possibly a problem with this handset only. If you want a good, basic phone that’s ideal for light to average use and doesn’t hurt your pocket, this is definitely one to consider.

Note
Manufacturers can release multiple versions of a phone model. Each version can potentially have differences in specifications or software. 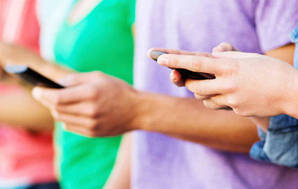