For years people have wanted headphones that don't tangle them up in cords, especially in winter when scarves provide extra tangling opportunities.

The first commercial bluetooth headphones were big bulky things that stuck out a mile from your head. Now they’re tiny earbuds.

OK, I said "tiny" … but the Plantronics BackBeat Go headphones are larger than most earbuds, although not by much. In fact the size was the only gripe I had with them.

The 2 buds are roughly an-inch-and-a-half long and come with extra rubber parts to help them sit in your ears better. They’re joined by what looks (and feels) like a flat rubber band rather than a standard headphone cable.

Setting up
The initial pairing with my phone (and with my tablet) was incredibly simple. And pairing happened automatically when I turned the headphones on again later. No pass codes were necessary and it took mere seconds. The controls worked with both “native” apps (which come with the phone) and third-party apps.

Wearing them
They’re extremely lightweight. After I’d added the extra rubber parts, the buds stayed in my ears even with the constant motion from walking and light running – although the buds looked a little silly sticking out of my ears.

After I’d paired the buds with my phone, their sound was loud and clear. Volume, play, pause and track-skipping controls are on the headphone band – and can be hard to find until you get used to them. The controls work well and are intuitive.

Sound
These headphones give good loud sound with no distortion or tinniness. Bass sounds were OK – and the music sounded just as I expected. 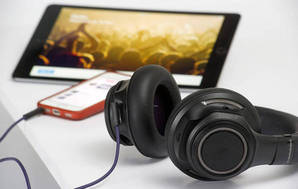 Compare test results for noise-cancelling and standard headphones and find out about the features to consider when you're choosing new headphones.