Last year I reviewed the Sony GTK-XB7 Bluetooth speaker calling it “too much all-round fun to pass up”. But it is a wee bit pricey ($550), a wee bit big (12kg and 650mm tall) and needs to be plugged in.

So this year Sony released its baby versions, the SRS-XB30 and the SRS-XB40.

Both models have the same embedded “neon” LEDs and strobes the XB7 has, but in much smaller packages. They also work on rechargeable batteries so are completely wireless.

All speakers are equipped with NFC, so you can quickly pair your phone by tapping it to the speaker rather than fiddling with Bluetooth settings.

Being small doesn’t mean they don’t have power. I set up one in the kitchen and I could hear it over the blender and other loud kitchen noises, not to mention down the far end of the house.

The speakers can be combined to create a wall of sound or as left and right stereo channels. You can do this in a few ways.

If you have two of the same speaker (for example, two XB30s) you can use the “add” button on the top of the speaker to join them together. Then pair one of them to your phone and away you go.

Using a similar technique, you can connect up to 10 speakers of different model types, for example an XB30 and an XB40 (you need to press the “add” and “+” buttons, instead of just the “add” button).

If you want to connect a large number of Sony speakers all over your home via WiFi, then you can use the Sony Music Center app (it was recently renamed from SongPal and is still called that in the instructions). The app can connect any number of compatible Sony speakers and WiFi gives you greater range than Bluetooth. In the app you can set up groups of speakers, set speakers to play as left/right channels and adjust the sound with an equaliser.

Connecting speakers was a bit hit and miss, and using the Music Center was mostly miss. Using the system of holding down buttons worked the best but sometimes took a few attempts. Using the app I couldn’t add more than one speaker at a time to any group, and they refused to join together. I was able to control the colour of the lights, but there’s little point if there’s no music.

The sound out of both the XB30 and XB40 can’t be debated though. While they aren’t for audiophiles, they give powerful, clear sound with little distortion. They’re perfect for parties or for young people (he sighs onto his keyboard) looking for a portable bedroom stereo. Or for anyone looking for a good system to dance to in the dark.

While you could take the XB30 and XB40 speakers to the beach, I wouldn’t recommend it. Instead Sony have the even smaller SRS-XB10. A cylindrical and slightly more rugged version of the SRS-X11, the XB10 is more for outdoors use than being a stereo you might listen to at home. It also lacks lights.

The XB10 doesn’t work with the Music Center app, but you can connect two of them via the “add” function. I didn’t have a second XB10 to try this out but I expect it to work well, like the X11 we tested.

The XB10 can pump out bass too, though again, don’t expect high-definition sound. But, unlike other speakers, you can hang this one from a tree while you barbecue. 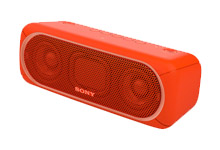 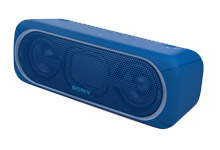 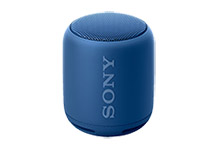 First Looks are trials of new and interesting products from the perspective of our product experts. Our lab-based tests offer truly objective product comparisons. These speakers were loaned to the writer by Sony.

If you plan on taking your devices out and about with you, it’s important they can withstand the elements. Ingress Protection (IP) ratings indicate how resistant a device is to water and solids (dust/dirt).

IP ratings have two numbers. The first relates to solids, such as dust, and has a maximum rating of 6. The second relates to water and goes as high as 8. An X rating means it hasn’t been assessed for that type of protection.

See here for more on IP ratings and the different levels of protection.