Getting stuck in rush hour traffic is terrible; same goes for inhaling your neighbour’s sneeze on the train. The Vado 4.0 offers a solution to both problems by allowing you to slip past snaking snarl-ups and keeping you out in the fresh air on your daily commute.

The Vado is an e-bike in disguise, due to the battery being incorporated into the frame. It looks more like an ordinary bike with a super-fat downtube. It’s stylish in matte black and sits at the premium end of the market at $6300. The mid-drive motor is so quiet I only noticed it making noise when I was climbing hills, and even then it was just a quiet whirr.

The handlebar-mounted display is easy to read and gives you a readout of speed, power level and battery level. The assist controls, bell and light switch are within easy thumb-reach of the left handgrip. It has three levels of assist, which tops up your effort by 25, 75 or 100%. There’s no throttle, so the assist only kicks in when you start pedalling. I noticed the motor having a big impact at low speeds when the assistance level was set to 100% – it felt like letting the clutch out too quickly in a manual car and jumping forward. To overcome this issue, I turned the assist down when manoeuvring through slow traffic. After this, I found it very stable – a big plus for commuting.

The lung-busting 2km climb at the end of my commute became a breeze as the motor helped me fly up, breathing easy the entire time.

Up front, the Vado has a bump-deadening 50mm of suspension travel and the disc brakes were very good at stopping the combined 145kg of bike and tester. The headlight is excellent – not only does it make you more visible, it’s great at lighting your path at night.

Out of the box, the Vado pootled along at 27 to 28km/h before I noticed the assistance dropping off. I felt that this was slightly on the slow side, and I was still being overtaken by other cyclists. Despite this, it had me climbing hills like a spooked mountain goat. The lung-busting 2km climb at the end of my commute became a breeze as the motor helped me fly up, breathing easy the entire time.

Turning a mule into Phar Lap

E-bikes are usually imported with a speed restriction of either 25km/h or 32km/h (to comply with either EU or US laws). Luckily for New Zealand customers, no such regulation exists here – we are only restricted by the posted speed limits on our roads. You can opt for a speed update for the Vado, which requires you take the bike into a cycle shop for the necessary surgery. I got the update applied and was delighted with result. My comfortable cruising speed increased from 27km/h to a scorching 42km/h. While the extra work the motor has to do drains the battery much faster, I still had plenty of juice for my 32km return journey.

The increased speed reduced travel time to 25-ish minutes each way. Compared to my hour-long bus trip, I gained an extra five hours at home each week and no longer deal with traffic woes and phlegm-filled hacks from my public transport chums. For me, it reigns as the king of the commute.

Have we seen this before?

We tested the Vado 3.0 in 2017. The motor is the same but the 4.0 has better brakes, gears and shifters and range is increased with the battery capacity increased from 460Wh to 506Wh. 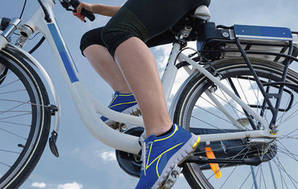 We've tested a range of e-bikes, scoring them on motor system and bike style. Learn about how they work, the different styles available and how to buy the right model.