I had put my back out the day before, but the heated lumbar support in the driver’s seat was melting away the aches. The air-conditioning was perfect, my music sounded amazing and the SUV was happily rumbling along a dirt road towards the Ruamahanga River in the Wairarapa. The Volvo XC90 is a big beast of an SUV. It’s like driving in a luxurious vault. You feel safe from outside elements while not being a threat to others as you cruise in comfort.

Driving towards Wellington from the bottom of the Rimutakas, I put the XC90 in adaptive cruise control, setting a maximum speed of 100km/h. Adaptive is a safer version of cruise control that monitors following distance. On a long straight, a police car had pulled someone over and the car in front of me slowed to go past. Before my foot even moved to the brake, the XC90 was decelerating.

Its bevy of sensors detected the leading car’s change in speed and made instant corresponding changes. When the leading car sped up, the XC90 accelerated until it was back at a safe following distance.

Volvo has long been known for safety; it was the first company to use three-point safety belts in 1959 and now uses the latest active technology to keep you, and other road users, safe.

The XC90 has lane detection that gives feedback through the steering wheel (or via an audio alert) if you change lanes without indicating. Automatic collision detection sounds an alert when objects get too close and lights embedded in the wing mirrors glow if there’s a vehicle in your blind spot. There’s even an alarm if the XC90 detects something on a collision course. However, I ended up turning it off as the narrow streets of Wellington gave too many false positives.

You don’t need to take your eyes off the road to check your speed as the XC90 has a heads-up display (HUD). A camera behind the rear-view mirror scans for speed limit signs and then projects this limit, alongside your speed, on to the windscreen so information “floats” in front of you. This means it can even pick up changes in speed limits from roadworks.

The XC90 has a self-parking system (slightly less sophisticated than the BMW i3) and wing mirrors that rotate downwards for greater visibility when reversing. The reversing camera is useful, though I found the fisheye lens slightly too curved.

The XC90’s LED “Hammer of Thor” lights activate whenever the SUV is running, increasing its visibility. At night, the lights move with the steering wheel to better illuminate corners as you turn.

When I got into it, I thought it would take a while to get used to the safety set-up. I was wrong. Everything was intuitive and I felt like I could relax and enjoy the drive.

The XC90 offers a luxurious ride. The seven seats are big and soft. Each passenger can set their air-conditioning and the front seats have back-soothing heaters.

The centre console is a large touchscreen. From here you can control almost everything. The built-in navigation worked well and integrated with the HUD. So driving instructions floated in front of me as each turn came up. The dashboard displays are also digital and the default view puts a map displaying your location between the speedo and tachometer.

Alongside the usual Bluetooth connection for phones, the XC90 also has Apple CarPlay. If you have an iPhone 5 or higher you can plug into the USB port, hidden in the central column, and access apps from the car’s touchscreen interface.

Not every app will work with CarPlay. The compatible apps are all audio- or navigation-based, so no playing Angry Birds while you drive. But you can use Siri voice instructions for calling, texting, or navigating. For example: “Call [name]” or “Give me directions to the closest café”.

Sadly, CarPlay lacked integration with the HUD, but that was the only downside. My phone charged while it was connected.

These interactive features will soon be standard, much like Bluetooth connections are now. The integration of comfort features with the safety features is seamless. The overall experience is brilliant.

First Looks are trials of new and interesting products from the perspective of our product experts. Our lab-based tests offer truly objective product comparisons. The XC90 was loaned to us by Volvo New Zealand. 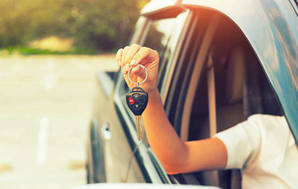 Should you buy new or used? What should you look out for when buying from a dealer, and what are you rights? We’ve tackled the big questions around buying and owning a car.

Five steps to take before buying a car