Our recent ride-on mowers test featured our first-ever look at zero-turn mowers. These mowers have each drive wheel controlled with its own lever, which allows for deft handling and the ability to turn on a dime. We were impressed and think anyone in the market for a ride-on should try a zero-turn mower since they offer superior control compared to traditional tractor-type mowers.

But as our test wound up and the dealers arrived to collect their mowers, one urged us to trial the Walker MS14NC ($14,000). He claimed this high-end model represented the last word in zero-turns.

So the next week we returned to our test site at Masterton’s Solway Showgrounds and were met by a long, slightly ungainly five-wheeled machine. Two large drive tyres sit in the centre beside your seat, with the chassis supported at each end by smaller castor wheels (two upfront, like other zero-turns, but with an additional larger wheel supporting the rear of the mower).

Like most zero-turns, two levers are used for steering. The difference is the Walker’s levers are small and close together, and both controlled by your left hand. Ground speed is adjusted via a separate lever for your right hand. This sounds complicated, but once we’d done a few laps of the showgrounds and tried navigating around obstacles, we found it much easier than standard zero-turns.

One of the major weaknesses of the other zero-turns we tested is their inability to handle anything steeper than a gentle incline, as their free-spinning front wheels makes them liable to swing downhill like a shopping trolley on steeper slopes. In contrast, the Walker excelled on a fairly steep hill, since the engine and rider weight is centred over the large driving wheels. This gave excellent traction when climbing.

When we got down to engaging the blades and mowing some grass, we found its motor less powerful than the other zero-turns we tested, which meant it slowed down in the heaviest grass. This isn’t surprising as the MS14NC is the baby of the Walker range, with only a fun-sized 14hp engine.

Despite this, we managed to mow just as much grass in an hour as the other tested zero-turns, which were driven by upwards of 20 horses. The secret is its unconventional mowing deck, which features two pairs of blades, one on top of the other.

Walker’s deck “floats”, meaning it’s hinged at a single point in front of the seat and moves with the terrain on its own small castor wheels, which enables it to mow further into hollows and minimises scalping any ridges, so it’s better on uneven ground than other models we tested. This deck also offers excellent visibility and makes it easy to steer around trees and tight corners. Its single point of contact to the chassis means you can lift the front of the deck up and latch it into a vertical position, which makes it easier to change the blades or hose it down.

However, the small engine meant it wasn’t a match for more powerful ride-ons in mulching mode and we had to drive it quite slowly to avoid clumping in lush grass.

If you’re after a ride-on and money’s no object, you should trial a Walker zero-turn, especially if your section has uneven ground and small hills, and many obstacles to navigate. But if you’ve just got a flat acre of grass to tackle, you can pick up a more powerful ride-on for less than half the cost.

First Looks are trials of new and interesting products from the perspective of our product experts. This model was trialled for a day rather than subjected to our full ride-ons test of four zero-turn and eight tractor-type ride-ons.

By George Block and Hamish Wilson 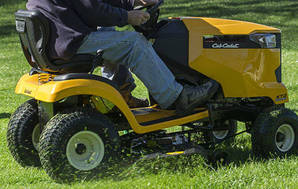 Got a lot of grass to mow? We’ve uncovered great ride-on mowers for everyone from beginner lifestylers to seasoned pros.