Our latest batch of LED bulbs on test have been running for 1750 hours, equivalent to roughly a year’s use for five hours a day, and so far none have burnt out. But many LEDs are marketed as having lifespans upwards of 15,000 hours. So how do you know your efficient new bulb will go the distance?

The problem with verifying these claims is just how long it takes – there’s no way to shortcut testing a bulb for 15,000 hours. Even if we did test bulbs for their stated lifespans, the rapid evolution of consumer lighting technology means they would be superseded by better-performing models before our test was finished.

The blue Energy Star mark is only awarded to top-performing bulbs that “last” at least 25,000 hours, equivalent to almost three years of continuous use. However, Energy Star labs don’t actually test them for all this time. Instead, the bulb is run for 6000 hours (about eight months) and, if it’s still going, how much brightness the bulb has lost gets measured. The testers then estimate how much the LED would dim after 25,000 hours. If they reckon the bulb will lose more than 30 percent of its initial brightness, it fails the test.

The good news is our LED testing over the past few years indicates the majority of bulbs on the market perform as claimed, as long as they’re used as intended. This means you shouldn’t retrofit LEDs into recessed downlights designed for halogen lamps, as LEDs can’t dissipate their excess heat from the base of the bulb in these fittings and are more likely to fail early. For fully enclosed downlights, we recommend replacing the entire unit with a dedicated LED fitting. Care should also be taken if you’re installing LEDs in environments where they’re likely to be exposed to steam, such as bathrooms or above kitchen hobs – in these applications it’s essential to install steam-proof fittings.

When you buy an LED, we recommend holding on to the packaging and receipt. If the bulb fails after a year (8760 hours), and the packaging claims it’ll last 15,000 hours or more, then a dated receipt is all the evidence you need to show the bulb hasn’t lived up to the manufacturer’s claims. As long as you’ve been using the bulb in the correct fitting, the retailer is required under the Consumer Guarantees Act to replace the bulb or give you a refund, regardless of warranty.

Become a paying Consumer member or log in at the top of this page to find out more.

Become a paying Consumer member or log in at the top of this page to find out more.

Guide to the table

Scores The overall score is comprised of the initial luminosity score (20%), 1750-hour luminosity score (60%) and failure score (20%). Luminosity scores are based on the light output of the lamp after 100 hours burn-in and after 1750 hours operation. The closer to its claimed lumens the better. The best-scoring models exceeded their claim. No models had any failures after 1750 hours so all score 100% for failure. All are bulb shaped and "warm white" colour temperature. Wattage is the labelled wattage for each lamp. Efficiency is a measure of light output in lumens per watt of electricity used; the larger the number, the better. Claimed life span is the number of hours the lamp should last in normal operation (about five hours on per day). It’s an average, not the minimum you can expect from every sample. 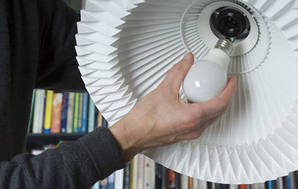 LEDs are a viable option for almost every lighting task. Our research will help you find the right bulbs for you.

We've scored more than 30 bulbs on their light output and switching life.