With massive suction, a huge bin and half-hour cleaning between charges, the corded vac’s days could be numbered.

Cordless sticks revolutionised how we vacuum. While corded models are the choice for deep-cleaning your home, a stick is a whizz at zipping over frequently used areas. However, with the V11 Outsize, Dyson thinks it has a stick that can do everything.

Let’s get over the obvious hurdle first … $1399. You read that right. Dyson stick vac prices push the boundaries of what’s reasonable, but this is next-level. However, our trial found the V11 Outsize is a cleaner that could consign your corded to the cupboard. 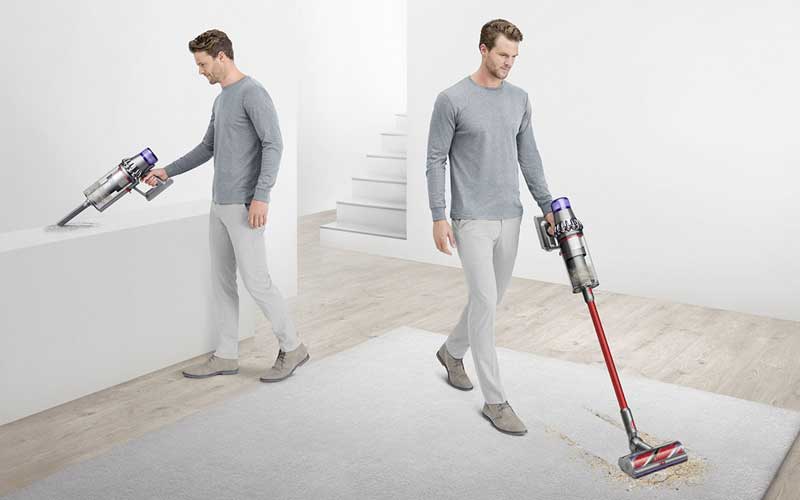 We’ve tested the normal-sized V11 Absolute stick, and we recommend it. In fact, its performance would shame a corded vac – compared to the best models, the V11 is better at cleaning carpet, scores 100% for picking up pet hair, and is easier to use than dragging a corded canister through your home. But it’s not perfect, especially if you have large areas to clean.

The V11 Outsize sounds like it’s been upgraded in all the right ways:

One vacuum cleaner to rule them all?

I was excited to try this out (well, as much as I could be about vacuuming). I’ve got a four-year-old Dyson V6 stick and a corded Miele vac at home, which cover small and large jobs between them. Could the V11 Outsize do everything they can?

My first impressions highlighted why all sticks vacs aren’t like this. As the name suggests, the Outsize is huge.

Whereas my Dyson V6 is easy to pick up and flick around one-handed, the V11 Outsize needs both hands. It weighs 3.9kg (1.6kg more than my V6), with a lot of that extra weight in the larger powerhead. You’d need forearms like Popeye to easily lift the head off the floor with one arm. That, and the wider cleaning head, means it’s not as easy to whizz this big stick into tight spaces.

Dyson could learn from line trimmer design – adding a second handle on the end of the bin would make it much easier to wield. If you’re thinking of going Outsize, I recommend you check one out in store first, to make sure you’re comfortable throwing it around.

I used the Outsize to completely clean my three-bedroom home – which is too much for my V6. My place has a 50:50 mix of hard floor (wood and tile) and carpet, stairs, and a few deep-pile rugs. Using my corded Miele vac, I need to swap it around five plug sockets to vacuum the entire space.

I was disappointed to find that, when fully charged, the built-in display indicated I had just 10 minutes of Boost mode available. That’s three minutes less than we measured from the Absolute and a result of Dyson packing a bigger motor into the Outsize. However, for regular cleaning, the V11 Outsize has an Auto mode that turns the power down on hard floors and up on carpet (see our review of that function on the V11 Absolute). Using this (and Boost a handful of times on really grimy areas) I got 35 minutes of cleaning time – enough to vacuum my house. The display told me I had still had five minutes of Auto mode remaining.

While manoeuvring the weighty V11 for more than half an hour was tiring, vacuuming my house with it was easier than it is with my corded Miele canister vac (especially on the stairs), and the end result was a house as clean, if not cleaner.

Overall, my whole-home clean was a success.

A versatile but bulky handheld

I also cleaned my car with the Outsize. It was manageable, but not as easy as using the smaller model. The weight of the vac and bulk of the bin made it harder to get under seats and into footwells. However, with its extra suction power, it made short work of grass and dirt left by football boots and a mountain bike (tasks my less powerful V6 struggles with).

The supplied attachments are great for this handheld cleaning task – a mini-powered head scraped dirt from velour seats and rough carpet. You also get a suite of upholstery, crevice and dusting tools.

Overall, car cleaning was a success.

My final test was to replicate the typical kitchen and laundry clean-ups where I find my V6 stick so handy: cereals, rice and washing powder. However, my old V6 is a bit underpowered for larger messes.

None of the spills were a match for the extra suck of the Outsize. All the powder and rice were cleaned up. Like most vacs, the V11 pushed most of the larger cereals around rather than sucking them up. However, using a “lift and drop” technique to get them under the head, they all ended up in the bin.

Compared to my V6, the powerhead of the Outsize got right up to cabinet edges. However, it was annoyingly too wide for one recess in my kitchen that the V6 head fits into perfectly.

Overall, my quick-cleaning test was a success.

The V11 Outsize can do everything a cordless stick and a corded vac can do. It’s a compromise, though – to give it enough power to tackle big cleaning jobs, it becomes less easy to use.

Like a stick vac, it’s great for quick clean ups and it hangs conveniently on a wall-mount to charge up when stored. Disconnect the wand and it becomes a handheld vac, albeit a large and somewhat unwieldy one.

Unlike most sticks, though, it’s powerful enough to tackle the whole home in one go. You won’t need to recharge it or empty the bin every five minutes.

The Outsize’s $1399 price tag is steep – I’ve never considered paying that much for a vacuum cleaner. However, this has the performance to replace my existing corded and stick vacs. If I were in the market for a new vac, it would be at the top of my list.