A ham and cheese bread roll, a packet of Shultz Mini Pretzels, and a packet of Select Little Families Biscuits. This is the kind of lunch box many parents may pack for their kids every school day. So what’s the problem? Salt – and lots of it.

The amount of salt in this lunch box exceeds the recommended maximum daily limit for a five- to six-year-old. It’s not just the littlies you need to consider. This lunch box contains more than 90 percent of an 11- to 13-year-old’s daily limit.

Salt is sodium chloride, and it’s the sodium that can be bad for you (see Why slash the salt?). Bread, processed meats, processed grain products (such as crackers and cereals) and takeaways are the biggest contributors to kids’ sodium intake.

Many lunch box favourites also pack a hefty sodium punch. Worryingly, it’s often the foods manufacturers market as lunch box fillers in convenient single-serve packets covered with cartoon characters and fun giveaways. But with a few switches you can slash the salt and still have food your kids will actually eat.

Savoury snacks: Chips, popcorn and pretzels are morning tea favourites. Unfortunately, many are high in sodium. For example, Eta Monster Munch Burger and Shultz Mini Pretzels have more than 1000mg per 100g.

A packet of popcorn is a better option – Pop ‘n’ Good Light and Buttery Popcorn and New Zealand Kettle Korn are moderate sodium options. Better still, you could make your own popcorn and seal it in a ziplock bag.

All rice crackers aren’t created equal when it comes to sodium. Pams Mini Rice Crackers Original have a third more sodium than its seaweed flavour.

Cheese snacks: Cheese is high in sodium but processed cheese slices are even higher. Homebrand Processed Cheese Slices have a whopping 1500mg per 100g.

Different flavours of the same product can have vastly different amounts of salt so check the nutrition information panel. Le Snak Cheese & Bacon Flavoured Dip with Crispbread has 50 percent more sodium than the cheese variety.

Bread: Bread contains moderate amounts of sodium, but because kids eat lots of bread, it’s usually the biggest source of sodium in their diets. Even small differences in a bread’s sodium content can make a difference, especially if your child has toast for breakfast as well as sandwiches in their lunchbox.

Keep specialty breads, such as paninis, for occasional treats – one panini has 480mg of sodium. One white bread roll has 370mg (before you add any fillings) and if your child likes bread rolls with cheese and bacon on top, that’s even more salt.

Staples fillings such as Marmite and Vegemite are also extremely high in sodium (although you don’t use much in a single serving). If your kids like peanut butter, choose varieties with no added salt.

Limit processed meats to once a week. Replace them with lower-sodium options such as egg or canned tuna. Tuna in springwater is best, it has less sodium than tuna in oil, brine or flavoured varieties.

Sweet and salty: You might be surprised at how much sodium some sweet biscuits contain. Select Little Families Biscuits Chocolate have about the same amount of sodium per 100g as Bluebird Ready Salted Potato Chips. Fruit bars and muesli bars have moderate levels of sodium – fresh fruit is a much healthier solution. 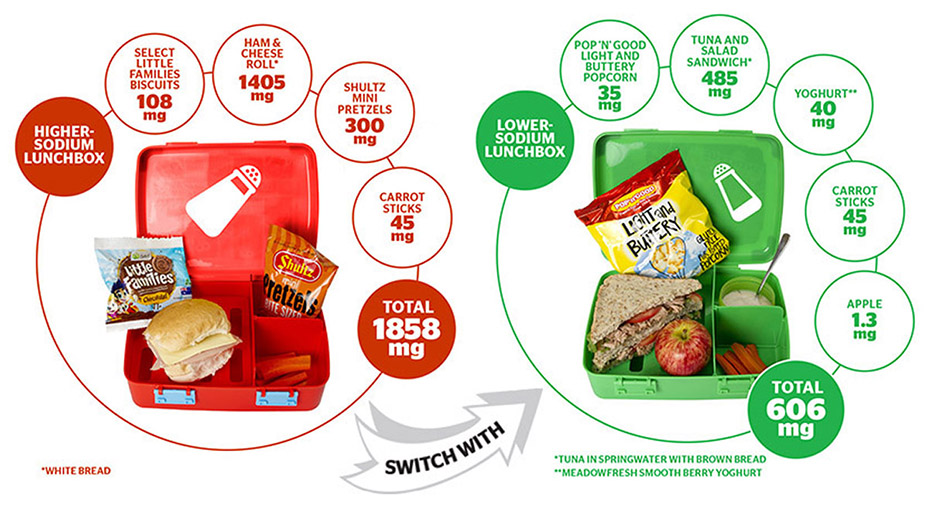 The red lunch box has a whopping 1858mg of sodium – that’s more than the recommended maximum daily limit for five- to-six year-olds in one meal. With a few changes you can significantly reduce that amount. 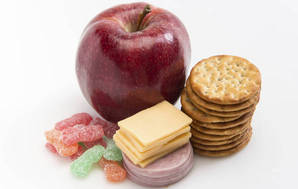 Seventy-five percent of our salt intake comes from processed foods. Use this as a guide when you’re reading food labels to help choose lower-sodium options.

Why slash the salt?

While all of us should be aware of how much salt we’re eating, children are especially vulnerable. A high salt intake in a young person may predispose a child to major health problems such as high blood pressure, osteoporosis, respiratory illnesses, stomach cancer and obesity.

Stroke Foundation national health promotion manager Jo Jarden said cutting back on salty foods is important. “Tastes and eating habits are formed early, so feeding your children fresh unprocessed foods instead of salty processed snacks is the way to go,” she said.

Worryingly, intakes could be even higher than this. The TDS doesn’t include “discretionary” sodium, such as salt added to food at the dinner table and during cooking.

The Heart Foundation’s national nutrition adviser and registered dietitian Angela Berrill said parents should read food labels and avoid adding salt to food they cook or serve at home. “When it comes to salt, less is best,” she said.

GUIDE TO THE TABLE PRODUCTS are listed by sodium content per 100g within product groups. SODIUM data is sourced from label information, and The Concise New Zealand Food Composition Tables 11th edition 2014.

Tips to reduce your child’s sodium:

With a few simple changes you can reduce the sodium in your child’s diet. We’ve devised two sample menus. Ollie’s lower-sodium meal plan has 1900mg less sodium than Jack’s.

Ollie starts his day with Weet-Bix followed by toast and peanut butter. Jack on the other hand prefers cornflakes and toast with Vegemite. At breakfast alone Jack has consumed nearly 600mg of sodium.

Ollie chooses lower-sodium crackers and snacks such as corn thins and popcorn, and opts for avocado on his crackers instead of cheese.

If Jack follows Ollie’s lead even to a limited extent, replacing the processed meat in his sandwich with tuna and his salty sausages and tomato sauce with chicken drumsticks, he’ll eat nearly 1300mg less sodium per day.

Know your salt facts? Take our quiz to find out for sure!

Not sure about some of the quiz answers? Here’s a bit more detail.

Q. Most of the salt in our diet comes from:

Q. Too much salt can cause:

Q. Which has the most salt?

Q. A bowl of cornflakes has about the same amount of salt as a small packet of potato crisps.

Q. Celery salt and garlic salt don't count. They're made from vegetables, so I can have as much as I like.

Q. I'm a keen runner and compete in triathlons so I lose a lot of salt as sweat, especially in the summer months. I need plenty of salt on my food to avoid getting cramp.

Q. You can always tell what foods are high in salt because they taste salty.

Q. Salt 'brings out the flavour' in food and it's bland without it.

Q. Only old people need to worry about how much salt they eat.

Q. You have to use salt in cooking. Recipe books tell you to use it - and so do the chefs on TV cooking shows.