Get a cinema experience at home - at a price.

This ain’t your run of the mill, shoebox-sized projector for doing presentations. The Sony VPL-VW760ES is a beast.

It’s a 4K home cinema projector with all the cinephile buzzwords: a laser light source, 2000 lumen brightness, ∞:1 contrast and HDR compatibility. As such, it has a price to match at $22,000. Which is a shame, because I love it.

It’s not cheap getting a cinema experience at home. The projector is obviously expensive, but you’re also going to need add-ons. You’ll need either a special screen for it or a big white wall. You’ll need something to play through the projector, so an HD Blu-ray player or game console (to get true 4K images). You’ll also need a full surround sound system (at least 5.1 channels) and an AV receiver to handle multiple video and audio signals.

These additions, along with the distance required between projector and screen, mean you’ll likely need a dedicated space to put it all in. This isn’t the sort of set-up you can fit into a two-bedroom apartment. The projector itself is a big unit, 560x223x496mm, and can create a picture between 1.5m and 7.6m (diagonal measurement). I set it up in our largest meeting room at Consumer and projected a 2.7m picture from roughly 3m away.

Given the amount of wires, audio and video options, and general set-up required, you’ll probably want a professional to come in and install it for you. This is another big cost, so don’t go into this lightly.

The picture quality is stunningly crisp. When I walked in front of the projection, my shadow on the screen was unbelievably sharp. It was so defined I could see individual hairs casting a shadow.

With a picture this good, you need a good source.

I connected the projector to the new Vodafone TV and an Xbox One X Digital Edition. The Xbox puts out native 4K images (not upscaled) and the projector kept up with all the fast-paced action at high frame rates. 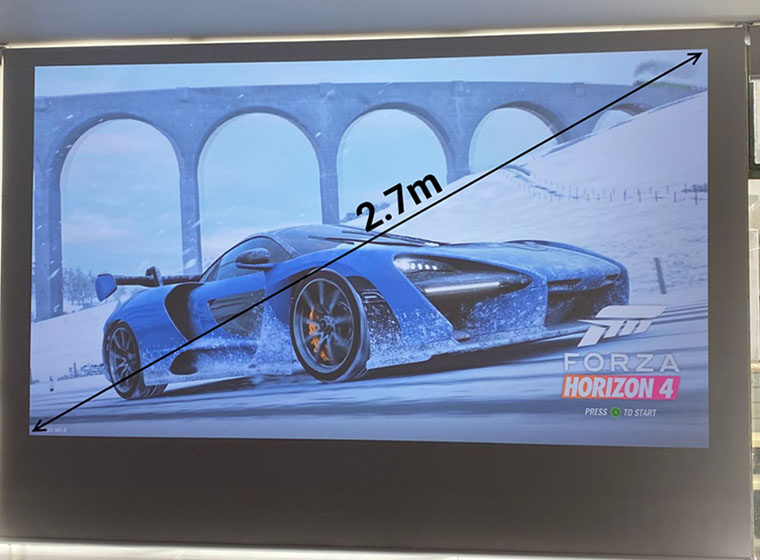 The Vodafone TV looked OK, but the picture was a little washed out and I needed to bump up the brightness and contrast. However, this may be the difference between broadcast quality and direct 4K.

The VW760 handled everything I threw at it with ease. The picture was as close to perfect as you can get and it was simple to get the display options I wanted. I guess that’s what you’d expect for a projector the same price as a new car. But, as I mentioned, the projector is just your first cost. You need the space, the sound system, and the installation. The final outlay could buy you a few new cars.