Our latest telco survey shows internet and mobile companies struggle with the basics of customer service, such as ensuring their customers’ bills are accurate.

“One out of every four consumers has encountered a billing dispute with their internet company in the past year,” Consumer NZ chief executive Sue Chetwin said.

Our survey also found about a third of consumers who had switched to ultra-fast broadband in the past year had encountered problems.

Spark and Vodafone, the two largest players, trailed the field. Only 43% of Spark customers and 41% of Vodafone customers were very satisfied with their retailer. Both companies scored comparatively poorly when it came to value for money.

Among mobile companies, Skinny Mobile (a division of Spark) had the most satisfied customers: 69% were very satisfied with the service they received. Skinny did significantly better than Spark, which had an overall satisfaction rating of 53%.

Skinny Mobile is a Consumer Trusted business. Businesses are assessed against our Code of Conduct and agree to comply with the code’s principles.

Vodafone lagged behind the other major mobile companies with a satisfaction rating of 50%. Its customers were more likely than average to strike unexpected charges and inaccurate bills.

Most consumers (62%) had a prepay mobile plan as opposed to a fixed- or open-term account plan. Consumers with prepay plans were more likely than those on post-pay plans to agree they were getting very good value for money.

Our telco survey was a demographically representative survey of more than 1050 New Zealanders, aged 18 years and older. 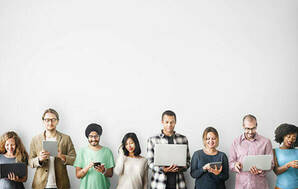 See how Kiwis rated their mobile and internet service providers.