Hundreds of consumers are being ripped off by ticket resale sites. It's time to clean up the market.

Ruth Kinkead was charged $445 for a ticket to see the British & Irish Lions game in Rotorua during the Rugby World Cup. But her pricey ticket turned out to have a face value of $59, a markup of more than 600%.

Like hundreds of others searching for tickets to events, Ruth had ended up on Viagogo’s website. The company claimed it was an “official” ticket seller. But it’s not. Viagogo is a resale website where tickets can be sold at hugely inflated prices.

Our investigation of the ticket resale market with Australian consumer group Choice found sky-high markups are far from the only problem.

Of the 1051 consumers who provided information to our investigation:

Viagogo was the cause of most complaints. But other ticket resellers, including Ticketmaster Resale and StubHub, also featured.

*Many participants experienced more than one problem.

What our survey participants said

“Booked in good faith not realising this was a resale site. Paid and received receipt for credit card payment from Viagogo but no tickets or any further communication. Have been unable to contact Viagogo since.”

“In a Google search, Viagogo was the first site listed and looked bona fide. I bought 2 tickets, which were among the last available (supposedly) … I was charged $323.12 for 2 so-called prime seats. At the venue, we found we had cheap back stall seats valued at $34.78 each.”

“I bought these tickets as a surprise for my husband for our 20th wedding anniversary. Arrived all excited as I paid an exorbitant amount thinking we were getting the best possible spot ever. Then was promptly told at gate we didn’t have tickets to get in.”

“I purchased 2 tickets on Viagogo. Its website kept prompting me to ‘hurry up’ as others were waiting to book. So I went ahead and it was only after I authorised the credit card payment that I was able to draw down the invoice and the tickets and was shocked to find the tickets were for children and the invoice was stated in Russian roubles.”

Many purchasers who ended up on these resale websites weren’t aware they were dealing with a reseller. Eighty-five percent of people who bought tickets for a New Zealand event didn’t know they were buying from a resale site.

Practices in the resale industry help foster confusion about who you’re doing business with. Viagogo ads often come up at the top of the list in Google searches for tickets.

Once you’re on the site, you’re met with messages that tickets are in high demand and selling fast. “Last ticket in this section”, “Less than 1% of tickets left for this event” and “Only a few tickets left” are among the claims that flash up, pressuring you to buy.

But what you get for your money isn’t always clear. Ticket details may be missing or inaccurate. People who thought they were buying adult tickets have been stuck with children’s tickets they couldn’t use.

Adding to the confusion, the price you’ll pay for the “last ticket left” may not be revealed until you’ve handed over your credit card details – and you may be charged in anything from Czech koruna to Russian roubles with a currency conversion fee on top.

What’s happening in the resale market is partly driven by the practices of tour promoters and official ticket agencies that create the impression tickets are in short supply.

Often, limited numbers of tickets are released for general sale and popular events sell out fast. The same tickets can end up hours, if not minutes, later on ticket resale websites.

A 2016 report by the New York Attorney General’s office found the majority of tickets for popular shows didn’t even go on sale to the general public. About a third can be sold in “pre-sales” and large numbers are held for industry “insiders”.

To help make the market fair, promoters and ticket companies should be upfront about how many tickets are available for general sale and the number of events planned. The industry also needs to invest in measures to stop professional scalpers buying large quantities of tickets that go straight to the resale market. 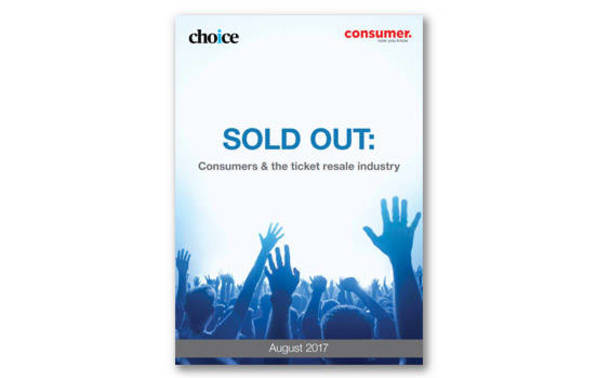 More than 1000 consumers shared their experiences for our investigation of ticket resellers, such as Viagogo and Ticketmaster Resale.

Read the results of the investigation in our report Sold out: Consumers & the ticket resale industry (1.14 MB).

There’s a legitimate reason for the resale market to exist. Consumers often buy tickets to events months in advance but can find their plans change. A well-functioning market would ensure they’re able to on-sell tickets to others who want to buy them.

However, current practices mean the market isn’t fair and consumers are being misled. In our view, these practices breach the Fair Trading Act and we’ve called for the Commerce Commission to take action against Viagogo and any other reseller that’s not playing by the rules.

In August 2018, the commission announced it was taking Viagogo to the High Court, seeking declarations the company has breached the act.

Across the Tasman, the Australian Competition and Consumer Commission has already filed charges against the company, alleging it’s misled consumers by failing to clearly state it’s a ticket reseller, making dubious claims tickets are “selling fast”, and failing to publish accurate price and ticket details.

Law changes are also needed to clean up the ticket resale market. In March 2019, the government announced new rules were finally on the way.

How to avoid getting ripped off

If you buy from a reseller, you also need to be aware:

What to do if you’ve been ripped off

Can’t understand why people still get conned with all the publicity about them. Afraid I lack in sympathy to all those who have been conned in the last year, there has been enough publicity about it
Cheers
Duncan