Travel insurance & health cover: What you need to know

Travel insurance policies are packed with ifs and buts. By default, insurers won’t cover you for problems relating to most health conditions you developed before you bought the policy – which can leave you on the hook for massive overseas medical bills. We tell you what you need to do before you depart.

Two weeks before a trip to South Africa, a Consumer member was diagnosed with a blood clot in the leg and was scheduled for emergency surgery. The couple cancelled their holiday plans but non-refundable expenses left them nearly $9000 out of pocket.

The couple submitted a travel insurance claim, which their insurer declined as it believed the blood clot was related to the member’s pre-existing vascular disease.

When the couple took out the travel policy, they were offered coverage for pre-existing conditions for $300 extra, but decided against it. This choice, their insurer said, cost them $8700.

Whether illness or injury strikes pre- or post-departure, the last thing you want to hear is that you’re on your own because you lack cover for pre-existing conditions.

The definition of a pre-existing medical condition is very broad: it includes every diagnosed disease and injury you’ve suffered, whether you’re familiar with the proper medical terms or not (see “Medical jargon”). It can also include related conditions and undiagnosed illnesses.

Even if you think your doctor’s given you the all clear, insurers can decline your claim if they can link the cause of your condition to a sign or symptom experienced before you purchased your policy.

When buying a policy, you’ll need to tell your insurer:

You’ll also need to get in touch if anything changes after you buy the policy. Failing to do so may allow an insurer to refuse a claim.

After you give a medical history, insurers will either exclude cover for anything relating to the conditions you’ve listed or offer you cover for a specified additional cost.

The same medical history can prompt very different responses from insurers. In our sample of 10 travel insurers, some companies charged hundreds of dollars more than others for cover (see our Table).

Can you tell an infarction from an infection? If not, you may need to brush up to get sufficient cover from your travel insurer.

For example, Webjet didn’t require any extra payment for our 34-year-old’s six health conditions. At the other end of the scale, Air New Zealand (underwritten by Cover-More) asked for $133 extra and excluded any cover for insomnia.

Two companies, Expedia and Travel Insurance Direct, have a list of covered pre-existing conditions in their policies. However, their lists weren’t sufficient for either of the two travellers in our case studies. For example, neither would cover our young traveller’s decade-old foot injury.

Southern Cross advertised the cheapest base policy for both travellers. The insurer, along with Webjet, also offered a discount if our pair bought their policies together. However, once we factored in the extra payments for our travellers’ pre-existing conditions, Southern Cross came in second cheapest.

With the variation our price survey found, we recommend getting quotes with cover for pre-existing conditions when you’re shopping around for travel insurance.

Can you tell an infarction from an infection? If not, you may need to brush up to get sufficient cover from your travel insurer. The health assessment tools on insurers’ websites allow you to search for a condition or symptom, but rarely use everyday language.

We gave our 60-year-old traveller a recent bout of stomach flu, requiring a visit to the GP two months earlier. The search tools didn’t recognise “stomach flu”, “tummy bug” or “upset stomach”. In the end, we had to turn to Google to find the medical term, gastroenteritis.

If you’re worried or have a complicated medical history, New Zealand Medical Association chair and GP Dr Kate Baddock recommends enlisting the help of your doctor, who can translate the often-complex terms used by insurers.

If your insurer refuses to cover certain conditions, get your GP’s advice on the risks of travelling overseas without insurance. “You can also shop around as not all insurance companies are the same,” Dr Baddock said.

Some insurers exclude all undiagnosed conditions, even if you’ve been upfront about your medical history. We think this type of broad exclusion is unfair: it makes travel insurance contracts too one-sided and disadvantages consumers for something that’s out of their control.

If there’s a legitimate reason for an insurer to limit cover, it should be specific about what’s excluded and why.

The Fair Trading Act bans unfair terms in consumer contracts, but the insurance industry is largely exempt from these rules. We want the ban extended so consumers can fight unreasonable terms in their insurance contracts.

Our trial compared comprehensive travel insurance products, but there was notable variation between policies. For example, Air New Zealand’s insurance will pay up to $25,000 if your bags are lost, damaged or stolen while 1Cover limits this to $15,000, and Webjet just $5000.

These differences may make a cheaper policy unsuitable for you or your trip.

Customer service is another important consideration. It’s worth the extra cost to stick with a travel insurer that pays claims promptly and supports you in an emergency. Our recent insurance survey found only half of all members who’d made a travel-related claim in the past three years were very satisfied with this process.

We sought quotes from 10 travel insurers’ websites for two fictional consumers, a 60-year-old man and his 34-year-old daughter. Each had six pre-existing illnesses or injuries, ranging from mild to serious (but well controlled). Both had been diagnosed with a medical issue in the 12 months prior.

Our 34-year-old’s conditions are:

Our 60-year-old’s conditions are:

GUIDE TO THE TABLE EXCESS and PRICE collected in August 2018 from the insurers’ websites for a 23-day holiday to France and the UK departing in October 2018. AAir New Zealand and Cover-More declined cover for insomnia. Bchosen policy limits cancellation cover to $5000. Cexcess for claims relating to pre-existing medical conditions set at $200. Least expensive total policy costs shown in green and most expensive shown in red. Premiums include any online discounts offered. Websites may use different health assessment tools, which may affect pricing. Severity of medical conditions may affect premiums. Expedia and Travel Insurance Direct were included in our sample but they excluded most health conditions of our travellers and therefore aren’t shown in the table.

If you’re planning to rely on credit card travel insurance for your next overseas jaunt, you’ll also need to fill in a health assessment, either online or over the phone. Complimentary credit card policies exclude all pre-existing medical conditions by default. However, you can pay an additional premium to purchase cover for approved conditions.

We sought quotes from four insurers that underwrite travel policies for bank-issued credit cards – AIG (Westpac), Allianz (ANZ), Cigna (ASB, BNZ) and Tower (Kiwibank) – for the costs our father and daughter would each need to pay to cover their six pre-existing medical conditions.

Prices for our 34-year-old varied by as much as $60. If she held an ASB Visa Platinum Rewards credit card, she’d pay $40 to get cover for her six health issues. As an ANZ Airpoints Platinum Visa cardholder, she’d be looking at an estimated bill of $100.

For our 60-year-old, AIG’s quote for cover with a Westpac Hotpoints Platinum Mastercard was the priciest at $167. Allianz and Cigna both quoted $100. Tower did not provide the information by our deadline.

GUIDE TO THE TABLE EXCESS and PRICE collected in August 2018 from the insurers’ websites and through enquiries for a 23-day holiday to France and the UK departing in October 2018. Insurers may use different health assessment tools, which may affect pricing. Severity of medical conditions may affect cover offered or premiums. 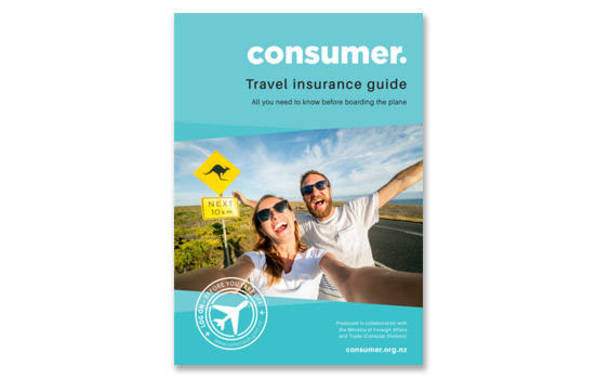 You can find our free downloadable guide (7.9 MB) to travel insurance here. The guide was produced in collaboration with The Ministry of Foreign Affairs and Trade (Consular Division).

Successful claims often rely on the steps you’ve taken before leaving the country. As well as declaring and paying for cover for your pre-existing medical conditions:

If something goes wrong: