Trial: BMW i3 and Hyundai Ioniq

Is the all-electric family car a reality yet? Any battery-electric vehicle (BEV) currently on the market would easily handle day-to-day use around town. But how practical would one be loaded with me, the wife and 2 primary school-age kids and luggage, especially for longer trips? I set out to see if 2 of the latest BEVs would work for a 1-car family like mine.

This winter, my decade-old petrol Outlander covered 310km in a typical fortnight of running errands, grocery shopping and delivering kids to activities. My 2 longest trips were 75km. I parked it up for 3 weeks in exchange for a fully electric BMW i3 and Hyundai Ioniq.

Along with daily use, my trial included a 130km test drive all over Wellington and to the Wairarapa, on a route including suburban and city driving, sections of 80km/h and 100km/h highway, rural roads and even some unsealed road.

BMW i3: The verdict 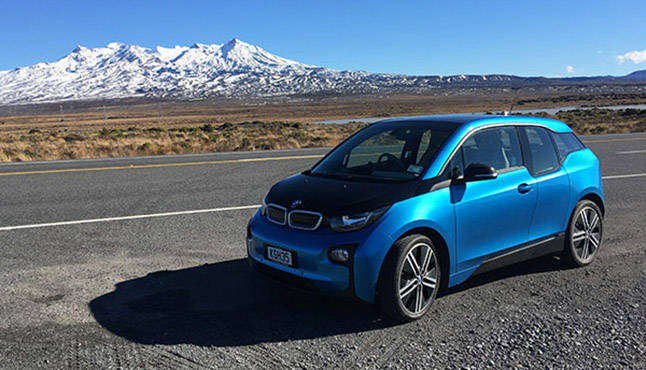 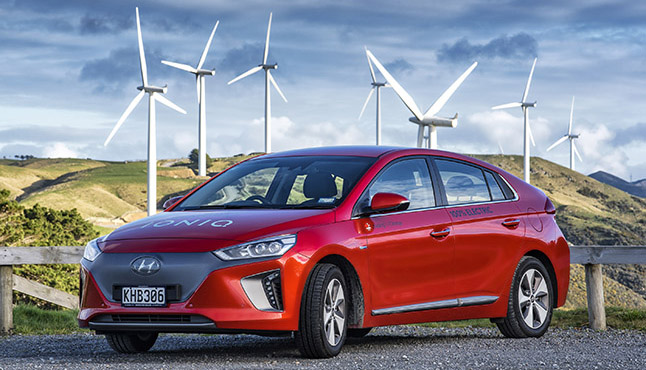 The Ioniq initially underwhelmed me. Not because it was in any way bad, but because it just felt like, well, a car. After the i3, I expected all EVs to be fun and quirky. In comparison, the Ioniq was dull. However, after taking it for an extended spin, perhaps that is its secret weapon – it makes BEVs seem normal. Despite my initial misgivings, I found it had most of the traits I loved in the i3, but served up with a bigger portion of practicality. Of the 2, this is most suited to family life.

For a more detailed review of each vehicle, see our in-depth report.

The Nissan Leaf is the most popular EV in New Zealand. There are more than 1600 Leafs registered. However, it isn’t available as a new car, only as a used import. A late-model 30kWh Leaf imported from Japan costs about $30,000, while a UK version costs about $35,000. The UK version offers slightly better equipment and has an English interface.

From our previous drives in a Leaf, we think it splits the difference between the Hyundai Ioniq and BMW i3. It’s as practical as the Ioniq, with a sprightlier driving experience. And while it isn’t as exciting as the i3 or as good to drive around the city, it is more spacious and doesn’t have annoying quirks like coach doors. However, the 30kWh Leaf has slightly less range. The US Environmental Protection Agency (EPA) tested it as having 172km per charge. In comparison, the EPA found the i3 had a range of 183km and the Ioniq 198km.

However, the 30kWh Leaf has slightly less range. The US Environmental Protection Agency (EPA) tested it as having 172km per charge. In comparison, the EPA found the i3 had a range of 183km and the Ioniq 198km.

During my trial, most of the charging was at home. This required a standard 3-pin power socket. The cable and converter needed for home charging come with the cars. Due to my spot tariff power plan, I would charge them overnight when the price of electricity is generally cheaper. The i3 and Ioniq both have built-in 7-day charging timers. This meant I could “plug-and-forget” when I got home in the early evening, without fear of charging starting instantly and blowing my power bill through the roof.

To get the best out of my power plan, I restricted charging to between 11pm and 7am, which limited how much charge I could achieve. The BMW came with a higher-capacity charger (which pushed electricity to the car faster) and managed a full overnight charge from 32%, but the Ioniq couldn’t get to 100% overnight if it started at less than 40%. With my relatively low daily use I didn’t need to charge each day.

A toasty bonus was being able to pre-heat the inside of the cars when plugged in. I just set my departure time and desired temperature, and the cars pre-heated the cabin in readiness – a welcome feature on cold winter mornings. As the cars were already plugged in, pre-heating didn’t use the car battery or affect driving range.

If I bought an EV, I’d budget on installing an external power point at a convenient location. For a dedicated EV charging point, I could get a higher-capacity outlet installed, reducing overnight charge time and increasing efficiency. BMW offers an “iWallbox” home charger. The box costs $2530 (inc GST), but you’d need to budget $3000 or more to include installation by an electrician. The iWallbox has a built-in cable, a lock (so only people with an RFID tag can use it) and, for a typical home, it cuts time for an 80% charge to less than 4 hours. It would be worth the investment.

Both cars easily coped with my day-to-day travel. But what about those half-dozen longer trips? Could a fully electric car manage without causing anxiety or requiring trips to be planned with military precision? I made 2 long trips in the least suitable car, the BMW i3, to gather data: a solo drive from Auckland to Wellington, and a family weekend trip from Wellington to Hawke’s Bay.

The trip was a resounding success. The Taupo to Mangaweka leg pushed the range, but was ultimately achievable. Since my trip, 2 more ChargeNet outlets have been added at Waiouru. I did experience “charge anxiety” as this was my first time using the ChargeNet system: would it work; what would do I do if it didn’t? After the first couple of charges, that anxiety disappeared. I didn’t need to make more stops than I would in a petrol car. I combined lunch with charging at 2 stops and only the final comfort stop in Otaki was longer than necessary while I waited 10-15 minutes for the charge. On a 9-hour journey, though, that’s no big deal. I enjoyed not having to stop at service stations, instead finding lunch in Cambridge and at a great Mangaweka café, where the car also refuelled. I stayed overnight in Taupo at a motel offering free EV charging.

The trip was a success in that we made it there and back in reasonable comfort, but we wouldn’t choose the i3 a second time. Once the family got involved, it was just too small and the range was just too short for comfort.

The i3 couldn’t swallow anything like as much luggage as my Outlander. In fact, it was an exercise in careful packing. We managed to fit enough gear for the weekend in squashy bags and included the kids’ scooters. But it was far from ideal. Space inside was tight for 4 people – the driver and front passenger had plenty of room, but the rear was cramped for a longer journey, even for kids.

The leg between Waipukurau and Masterton (161km) pushed the range – we arrived with just 10% charge remaining. For half the leg, I drove like a “hypermiler”, accelerating gently and hardly exceeding 90km/h. I spent an anxious hour watching the charge and kilometres to Masterton click down.

Recharging added about an hour to our round-trip journey time. On the outward trip, the stops at Otaki and Waipukurau were unnecessary, while on the return, we wouldn’t usually need to stop at Waipukurau. However, my kids appreciated the chance to get out of the car and run around. The Masterton charger was right outside a playground and mini-golf course.

The only other problem occurred when we needed to transport 5 people to Napier from Havelock North. The i3 has only 4 seatbelts, so our eco-credentials were ruined when we fired up our friend’s Land Rover Defender instead.

Range - what can we expect?

The BMW i3 has been around since 2013 – the 94Ah version we tested is the second iteration. As EV and battery technology evolve, manufacturers are clamouring to announce their next-generation, affordable, long-range BEVs. So what can we expect?

Overseas, the Tesla Model 3 – a full 5-seater about the size of a Toyota Corolla – has started shipping to customers who were quickest off the mark with their US$1500 deposit. If production follows Tesla boss Elon Musk’s schedule, Kiwi customers will likely see their Model 3 next year. Tesla claims the US Environmental Protection Agency (EPA) rated it as reaching 350km between charges.

Chevrolet sells its Bolt in the US with a 238-mile (380km) EPA-tested range. However, this isn’t available as a right-hand-drive version, so won’t be appearing here as a Holden.

Despite launching the Ioniq, Hyundai has been slow off the mark getting an EV to market. It has hinted at plans to extend the Ioniq’s driving range to more than 300km in 2018 and launch a longer-range all-electric SUV around the same time.

The Leaf, the granddaddy of BEVs, is due for replacement this year, having already been through 2 model-cycles since its launch in 2011. The next-generation Leaf is touted as having “game-changing” battery technology with a 200+ mile (320km) range.

Based on my experiences, 1 electric car being able to service an entire family isn’t too far off, but it isn’t a reality yet.

One of our staffers, Julie, who lives in a rural area and commutes daily to the city, demonstrates the perfect case for EV ownership. In the fortnight I recorded 310km car travel, her car covered 1038km. That was due to her regular 150km round-trip commute. An EV with a realistic 200km range, such as the Hyundai Ioniq, would cover all of Julie’s daily travel on an overnight charge at home.

As a second car, or for a couple, either of these cars would be great. However, with just a little more range and a little more space, 1 electric car would cover all my family’s car requirements, including longer trips. These 2 were just a bit too inconvenient.

However, both (but particularly the i3) were so good to drive, cost so little to run, and had the feel-good factor of swapping oil and pollution for hydro-power and clean air that I’d put up with some inconvenience. Perhaps I should trial one with a roof box and bike rack? 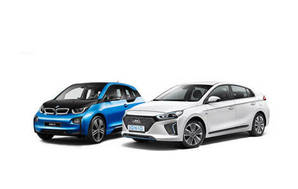 More on the BMW i3 and Hyundai Ioniq

Paul Smith takes an in-depth look at each vehicle, including braking, handling, the interior, and more. 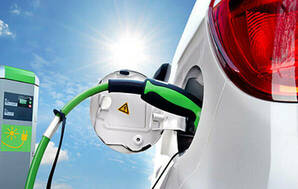 BMW i3 vs. Hyundai Ioniq: An in-depth look

A guide to electric vehicles