Are you really getting a bargain with big store “specials”?

Big deal! Huge deal! Price reduced! At some big box retailers, the discount signs are so common it feels like there’s a promotion on every other week. But if “sales” are so frequent, are we really bagging a bargain?

We tracked prices for a range of items at four big box retailers – Briscoes, Farmers, Harvey Norman and Noel Leeming – over 13 weeks. If you’re already sceptical about “special” offers, our results won’t do anything to change your mind.

If you miss a special one week, you can bank on another coming along in fairly short order.

Our price survey was carried out online over 13 weeks at Farmers, Noel Leeming and Harvey Norman. At Briscoes prices were tracked online for 12 weeks. Weeks in red indicate when the item was on special.

All eight items we tracked at Briscoes were regularly on special during our survey.

It was only marked at $329.99 for a maximum of two weeks at a time before being put on “sale” again.

It was a similar story with the Sunbeam Quantum Plus Toaster (four slice), on special for six weeks. The regular price was $89.99. “Special” prices for the toaster fluctuated between $44.99 and $62.99.

All the other products in our survey were on special at least four times.

Briscoes said it had “a robust internal audit process” to ensure it complies with its obligations under the Fair Trading Act.

You can be sure of regular specials at Farmers too. Sales on the eight items we tracked popped up almost every two to three weeks.

The Breville Barista Express Coffee Machine was the priciest item we tracked, marked with a “regular” price of $1199.99. On five occasions, it was marked down to prices ranging from $699.99 to $849.99.

Farmers believes the frequency of promotions were “within guidelines issued by the Commerce Commission”.

Six of the seven products we tracked at Harvey Norman were promoted with deal-saving claims almost every week.

We saw a similar pattern with the VS Sassoon Expert Turbo Hair Dryer. One week it was priced as a “Big Deal” of $36 and the following week a “Hot Deal” of $39. The hairdryer graduated to a “Huge Deal” eight weeks later (but was still $36).

A Harvey Norman spokesperson said it “doesn’t wish to make any comment” when we asked it to explain the huge variety of price promotion deals and what they meant. 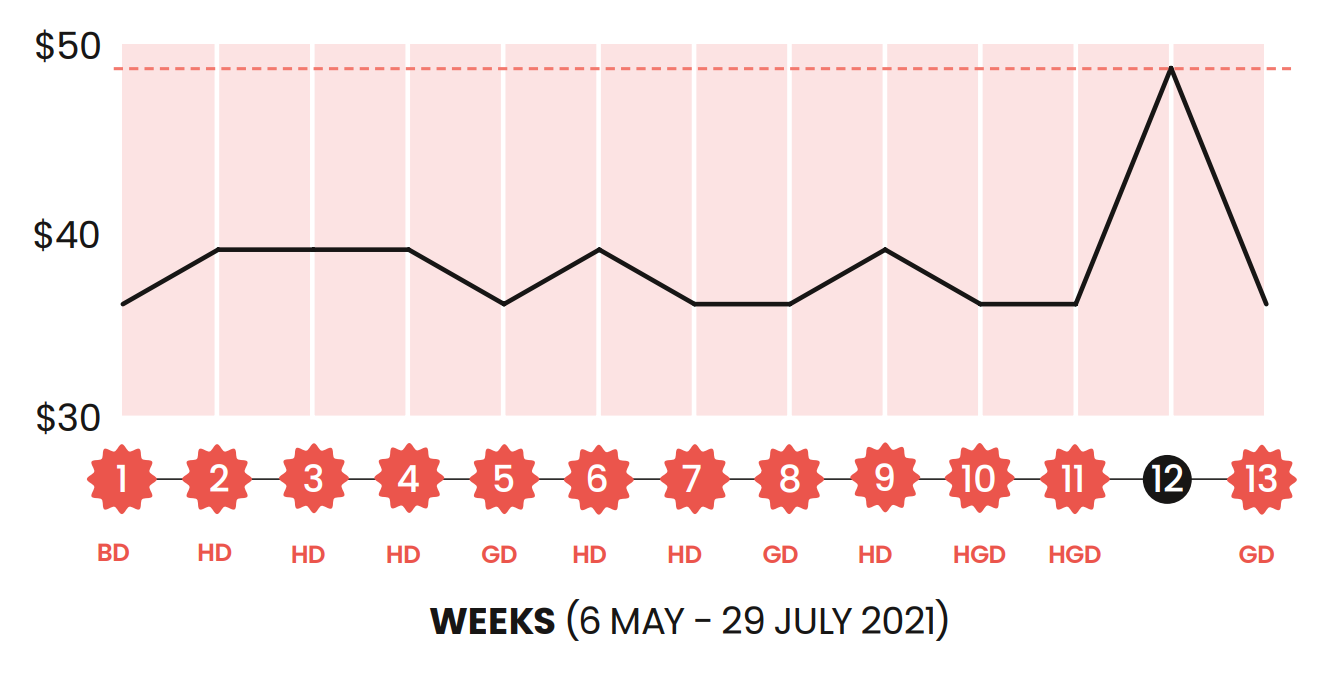 Five of the eight items we tracked at Noel Leeming were on special four or more times.

Sony Wireless Noise Cancelling Headphones were marked down 11 of 13 weeks. The regular price was $599. But for most of time, the headphones were priced from $408 to $429. One week, there was only $1 difference in price.

Noel Leeming’s marketing gurus weren’t quite as inventive with the sales pitch as Harvey Norman.

The most frequent claim we encountered at Noel Leeming was “Price Promise”. It was used on every item we tracked and means the retailer will match the price for the exact product if you find it cheaper elsewhere. However, as some appliances are exclusive to Noel Leeming, you won’t find them at other retailers.

For instance, the Kenwood Multipro Food Processor (FDM300SS) was advertised as a “Price Promise” and an “Exclusive” for 12 weeks.

Several retailers have been called out by the Commerce Commission for their price promotion claims.

While offering special deals is legit, if a business routinely sells a product at a “special” price that’s really the usual selling price.

Strandbags is currently facing seven charges over price promotions. The commission alleges that between July 2018 and January 2020 Strandbags routinely advertised “sales” even though bags were being sold at their usual price or close to this price.

In October 2020, Pak’nSave Mangere was fined $78,000 for its misleading price claims. The commission found customers were routinely charged higher prices at the checkout than those displayed on shop shelves.

That same year the commission sent an open letter to retailers reminding them it’s an offence, under the Fair Trading Act, to mislead consumers about the price of goods and services. If retailers don’t toe the line, they can be fined $600,000.

We’re still seeing exaggerated sales. We’ll be providing the results of our price-tracking survey to the commission.

The top four things you need to know about sales.