Budget vs premium kettles: what an extra $374 buys

The Dualit kettle is worth more than Kmart’s budget model – but not by much.

The Anko Stainless Steel Kettle LD-K3030A sells for $25 at Kmart. Dualit sells its Classic 72790 model for $399. Both boil water, are the same size (1.7 L), have similar features and, though the Kmart is a bit noisier and slower to boil, they're both good overall performers in our tests. So, why is one 16 times more expensive than the other? We took them apart to find out.

Is the Dualit worth the money?

If you place value on a brand that was “born out of one man’s passion for invention”, the warm, fuzzy contentment of owning products handcrafted in British workshops, and the design cues of stainless steel, stamped logos and exposed fasteners, then perhaps the Dualit’s steep price is worth it. And certainly, those factors carry some value. But, while the Dualit Classic Toaster is still “hand built in the UK since the 1950s” and uses a genuinely innovative heating element, its Classic Kettle is made in China with parts and mechanisms similar to those used in kettles costing significantly less. Much of its value is marketing smoke and mirrors.

Compared to the $25 Anko kettle, Dualit uses better-quality materials. Its design choices suggest the more expensive kettle will be more robust. However, there isn’t a remarkable difference between the two – certainly not enough to justify the eye-watering price gap. For example, both kettles use off-the-shelf switches and power connectors from Otter, a UK-based supplier (though the Dualit ones are from a better quality range). Overall, the Dualit creates an overall impression that it will last longer than the Anko.

Repairable, at a cost

If your kettle does fail, the Dualit Classic is repairable. Dualit offers a comprehensive range of spare parts. However, Dualit parts aren’t cheap (a lid hinge kit costs $19, a replacement element $89) and repairs need to go through an authorised service agent, adding more expense. No spare parts are available for the Anko. You might conclude you’d be better off buying multiple disposable Anko kettles, rather than one longer-lasting and repairable Dualit (and the environment be damned). But there’s a better solution. Through dismantling these kettles and investigating common faults, we’re convinced it’s possible to design a reasonably-priced kettle that can be repaired by a consumer. For more than the price of the Anko, but much less than the Dualit, everyone should be able to own a kettle that lasts and can be easily fixed if it breaks down. It’d be a win for manufacturers, consumers and the planet.

As you’d expect given the price difference, the parts and manufacturing methods used in the Anko are generally of lower quality than those in the Dualit. However, we spotted areas where the Anko design could lead to particular common failures:

Problems with the lid caused a quarter of kettle failures in our recent survey. The lid either wouldn’t open (15% of failures) or wouldn’t stay closed (9%).


The lid of the Anko kettle is released by pressing a button in the handle. It’s convenient to use, but the design includes lots of small plastic parts that can’t be adjusted. If part of the mechanism fails, it’s likely to mean the lid can’t be opened. With no spare parts available, a broken lid means end-of-life for the kettle, even though it may still boil water.

In comparison, the Dualit’s lid opens by pulling up on a handle. It’s less convenient to use, but the design has few moving parts and, should it fail, it’s likely to be at the hinge, which can be replaced. The lid design also includes bendable metal tabs to fine-tune the fit, so it’s unlikely the Dualit Classic will fail because its lid wouldn’t open or stay closed.

The Anko fill-level indicator is sealed to the jug using press-fitted rubber grommets – it’s held in place by the handle moulding. If any of these parts are poor-fitting (a possibility given the price point), they could leak. Replacement would be easy, if parts were available. Dualit bonds the fill-level indicators to the jug. This means they should be leak-free. However, they aren’t replaceable if they deteriorate during use.

Both kettles turn off automatically when steam heats a thermostat in the switch. An internal pipe routes steam down to the thermostat, which means a hole is required in the bottom of the jug. It’s a design common to most kettles, and a likely cause of many of the leaks reported in our survey. Both of these kettles seal the pipe to the jug with a rubber grommet. However, where Dualit uses a single seal between the jug and the thermostat, Anko uses two seals and a plastic guide. The Anko design creates extra joins that could leak and more chance of steam failing to reach the thermostat (15% of failures in our survey are caused by the kettle not shutting off when boiling).

The power supply, switch and heating element were implicated in 30% of kettle faults: some kettles didn’t turn on, others had power but didn’t heat water, and a few stopped working entirely.

The Anko kettle uses a power and switch design common to many other brands of kettle, most of which sell for many times its price. None of the system is repairable: nothing can be done to revive a kettle that suffers a power fault, a broken “ON” button, faulty wiring or an element burnout. Unlike many other manufacturers, Kmart doesn’t even offer replacement power bases (the part that connects to a wall socket).

Dualit makes a big deal of its “patented replaceable element”, which is really an assembly of the element, power switch, thermostat and power-indicating LEDs. The design means that, should any of these parts fail, the assembly can be replaced (it costs $89). The element is press-fitted into the kettle base with a double-lip silicone seal. This makes the Dualit Classic kettle almost entirely repairable (only the fill-level indicators are not). However, the replaceable element adds significant complexity and cost, not least because the design has to minimise the risk of leaks around the extra seal added to the base. 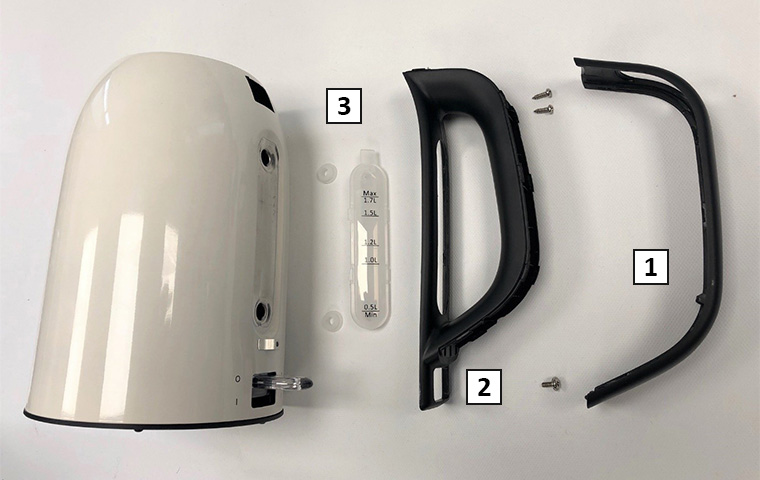 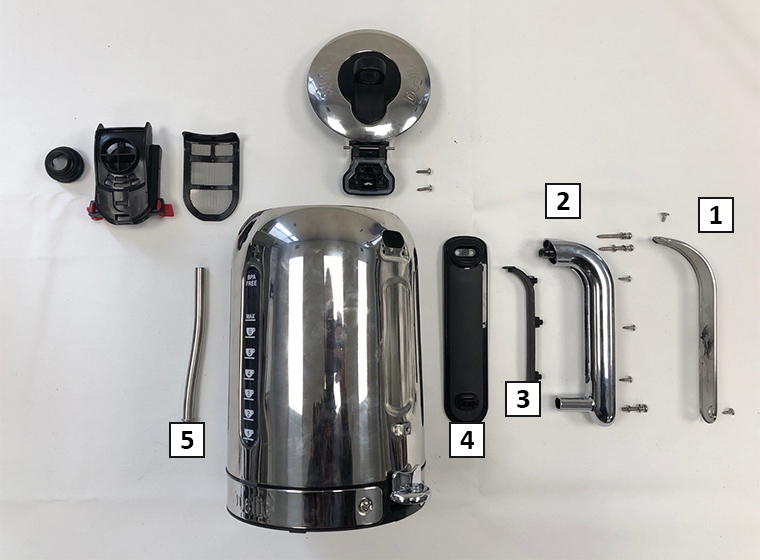 Pushing a hinged release button on the handle [1] pushes a wedge [2] attached to a pin [3], which slides in towards the lid. This rotates a lever [4], which pulls a slide [5] towards the handle, retracting a catch [6] from the jug and releasing the lid. A spring [7] pushes on the hinge to open the lid. The pin [3] and slide [5] are sprung to reset the mechanism when the button is released. All parts of the lid release mechanism and hinge (except the return springs) are plastic, with no adjustment possible to account for wear and tear. 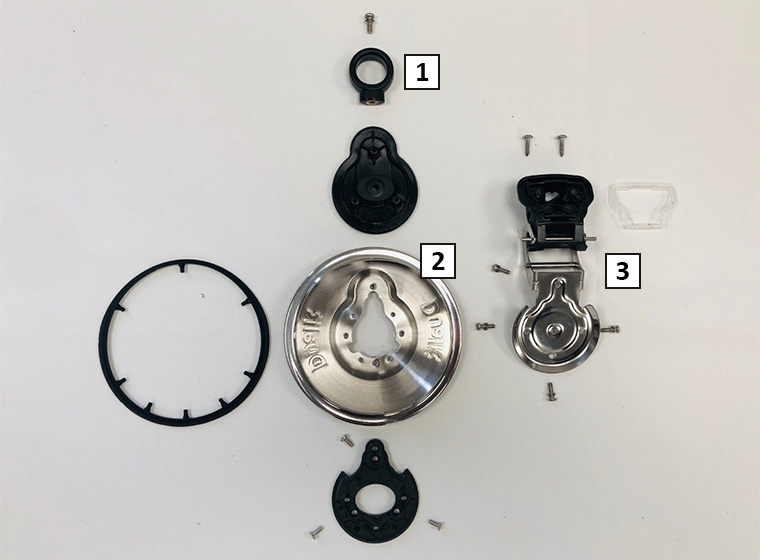 The lid is opened by pulling up on a plastic handle [1] screwed to the stainless steel lid [2]. The hinge [3] has metal and plastic parts. It’s “sprung”, using a friction-fit to two rubber bumpers, to lock the lid fully open. The lid is locked closed by three metal clips in the lid that adjust the force needed to open it. It’s a simple mechanism that is adjustable and should be durable. 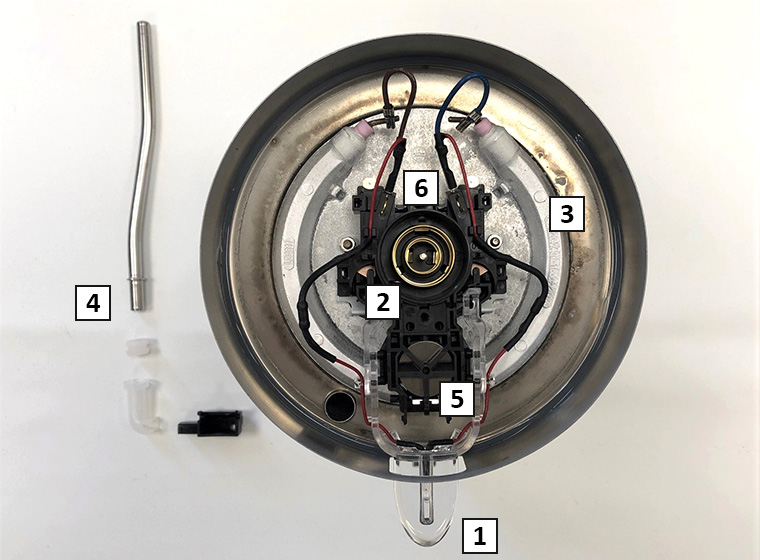 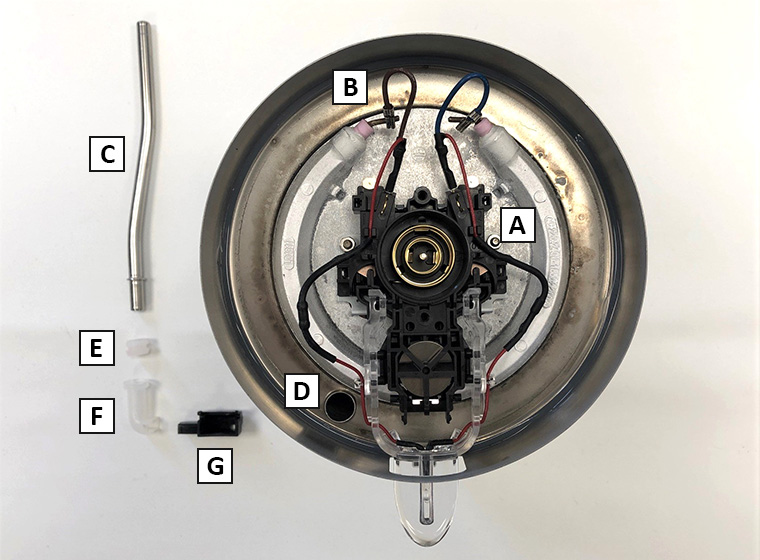 A plastic cover, held by two screws and plastic clips, hides the switch and power assembly. The switch can be unbolted from the element [A], but wiring is soldered in place [B], so cannot be easily removed and refitted. The steam pipe [C] is mounted to one side of the thermostat [D]. It is sealed to the jug by a rubber grommet [E], and steam is directed to the thermostat by a second rubber tube [F] press-fitted to the pipe and a plastic moulded part [G]. 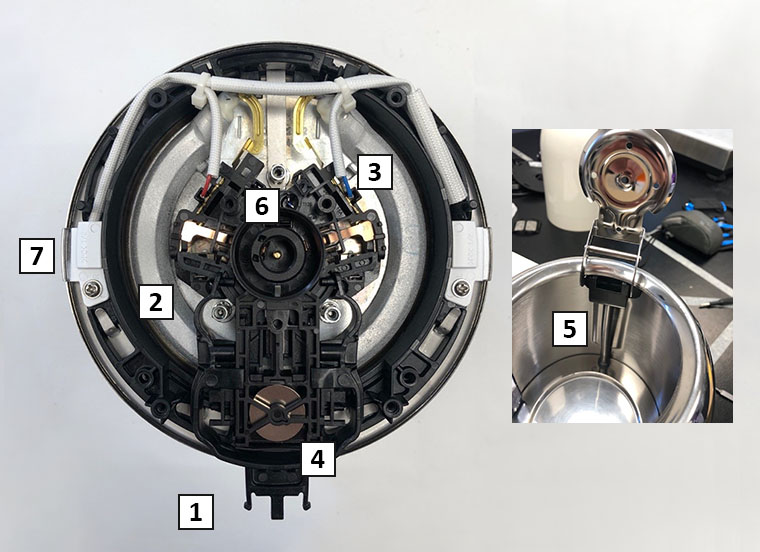 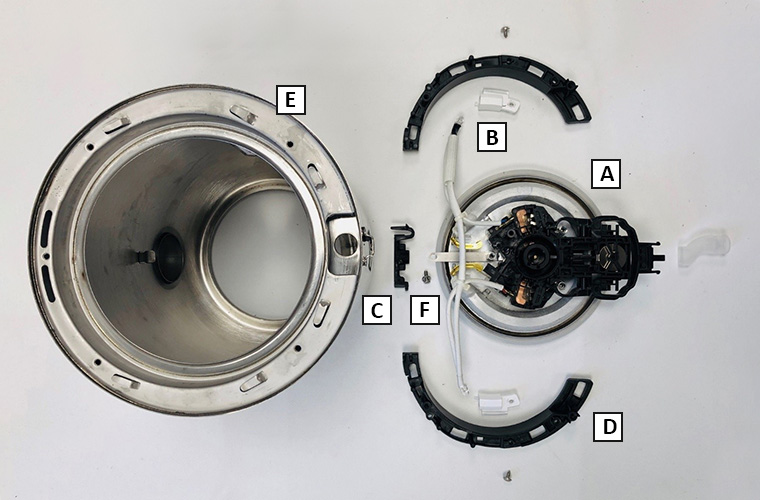 The heating elements in both kettles look identical. However, the Dualit has a replaceable element. A system of clips holds the element and its silicone seal [A] in place. To remove the element, two LED power indicators are unscrewed [B]. Removing a plastic spring-clip [C] allows two curved plastic parts [D] to be rotated and unhooked from metal clips on the base [E]. Finally, removing a screw through a metal strip [F] frees the element and its silicon seal, which press tightly into the jug base. The switch and wiring cannot be removed from the element, so replacing the element also replaces the switch, thermostat and wiring.