Our guide to buying the safest car for you and your family.

The best advice when buying a car is to choose the safest model you can within your budget. It’s about shifting your mindset from looking at leather seats or sunroofs to focusing in on the safety rating which indicates the level of protection provided to you and your passengers if things go wrong.

When shopping for a car, you want the safest one possible. But how can you bypass the marketing fluff and know which vehicles will keep you protected? All you need to do is check its rating. You’ll see cars with five stars (the safest models) down to one star (the worst performers).

The best way to think about car safety is to imagine a bubble around you as you sit in the car. If that bubble pops in a crash, then you get hurt (or worse).

The safety bubble in a five-star car is strong and completely envelops the driver and occupants. As the stars decrease, the bubble shrinks and gets weaker. This means a crash you’d probably walk away from in a five-star car is a different story in a lower-star car. In that case, it isn’t about whether you’ll get hurt, but how badly.

Since 1993, ANCAP has tested new vehicles sold in our market by fitting them with sensors and crash-test dummies, then crashing the cars in specific ways and analysing the results.

ANCAP awards stars based on the results of the crashes.

The ANCAP star rating only applies to the specific vehicle tested. So, if the sedan was crashed and rated, the results won’t carry over to the hatch version. The differences may not be obvious on the surface but can result in considerably different performance in a crash (for example, a bigger-engine variant may not have the same crumple zones as the smaller one). Also, a lower-spec model may not have the same safety features.

If you crashed an older five-star car into a new one – for example, one from 2002 and one from 2020 – the results would astound you. The older car would look anything but five-star. That’s because the ANCAP test is a continually evolving beast that helps push the industry to become safer.

As new tech enters the market, it’s quickly adopted into the testing regime and becomes the bare minimum to achieve high ratings. Getting a good rating is important for manufacturers to sell their cars, so they all scramble to meet the standards.

It pays to remember that ANCAP ratings have a shelf life of up to six years, or they can be replaced sooner when a new model variant comes on the market. The average age of cars on our roads is 14 years – that’s a lot of metal hurtling all over our country with outdated safety. That old five-star car you’re looking at buying may not be considered particularly safe by today’s standards. 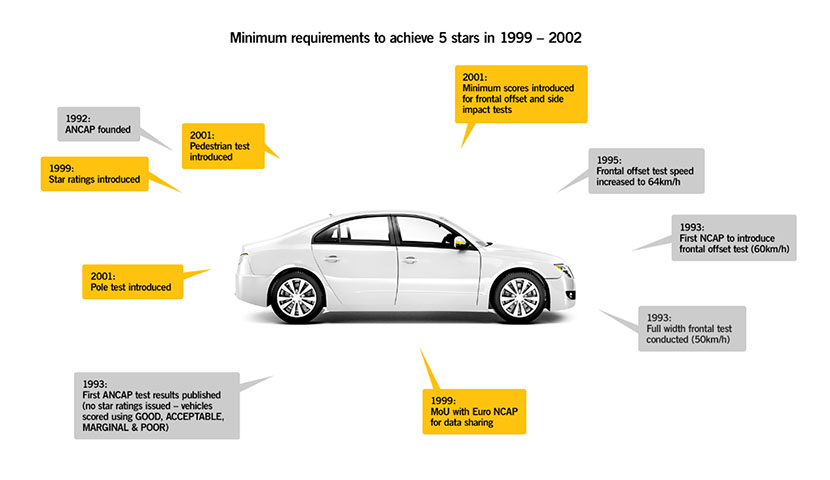 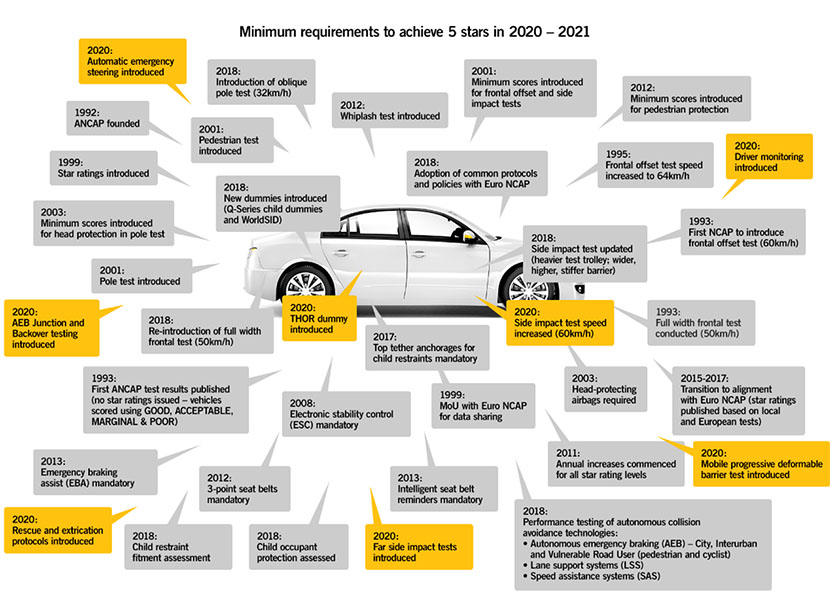 One-star damage versus a five-star


In May 2020, Waka Kotahi NZ Transport Agency released footage of the results of a 64km/h head-on crash between a one-star and five-star car. Both were of a similar size and price point (comparable vehicles are widely available on the second-hand market). The important difference was their safety rating.

The results for the one-star car speak for themselves – the front-end completely collapsed on to the driver’s legs. There was a 77 percent chance of serious injury or death. That risk plummeted to 12 percent for the driver of the five-star car.

Clearly, it’s worth investing in a safer car.

Tip: Since ANCAP only applies to new vehicles, it's only relevant for a small proportion of our vehicle fleet (about 12 percent). The majority of the ratings are made up of the USCR and VSSR in our import-heavy market.

Why don’t imports have an ANCAP rating?

Used imports from Europe and Japan don’t have ANCAP ratings because the rating is only applicable to those vehicles with the exact features tested, imported vehicles may be kitted out differently. Manufacturers advise Waka Kotahi of the features in each new model sold on our shores, but they are not usually involved with the importation of used vehicles, so can’t be sure of the safety features installed.

Tip: If you're buying a used import, visit rightcar.govt.nz to see the safety rating and check how many stars it has. 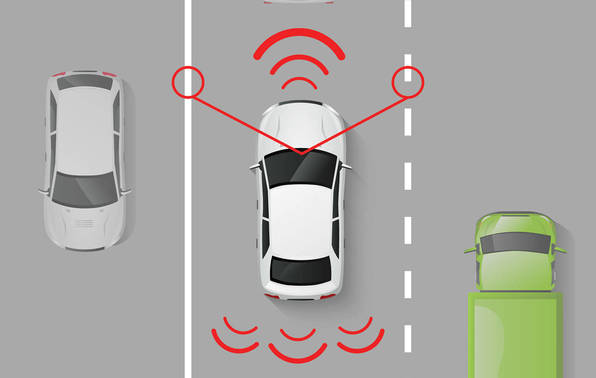 The active and passive safety features in a car protect you in different ways. You want a car with both.

What is the Used Car Safety Rating?

The UCSR comes from data gathered by Monash University from more than eight million vehicle crashes. Ratings are generated from police reports of the crash type and injuries occurring from incidents both in New Zealand and Australia. In a similar fashion to ANCAP, vehicles are awarded one to five stars – with five-star cars the safest.

Since we have so many imported vehicles bombing around our roads, UCSR makes up the majority of the safety ratings on the market (about 60 percent).

Within the UCSR are models designated as a “Safer Pick”. These vehicles should be at the top of your shopping list. Not only do they boast five-star ratings, they also include electronic stability control and reversing aids (either reversing sensors, a camera or both).

Electronic stability control (ESC) is a safety feature that intervenes when you begin to lose control of your car. It manages the engine, brakes, power steering and traction control when it detects that things are going awry. The system stops a minor loss of control turning into a catastrophic spin.

It’s been a mandatory feature for achieving five stars with ANCAP since 2008, and a requirement for all new and used cars imported into the country since March 2020. You should avoid any car that doesn’t have it, which likely rules out most Japanese imports manufactured prior to 2009. Pre-2009 European models may have it, but it’s not guaranteed.

Very new imports or less common cars won’t have enough crash information to generate a UCSR. This is where the VSRR comes in. It’s similar to the UCSR but, rather than being model-specific, the ratings come from similar vehicles from the same year of manufacture.

Tip: You can't directly compare an ANCAP rating with a UCSR or VSSR. Five-star ANCAP isn't the same as five-star UCSR. Cars will be rated using one of these systems – look for the highest number of stars regardless of which rating system is used. 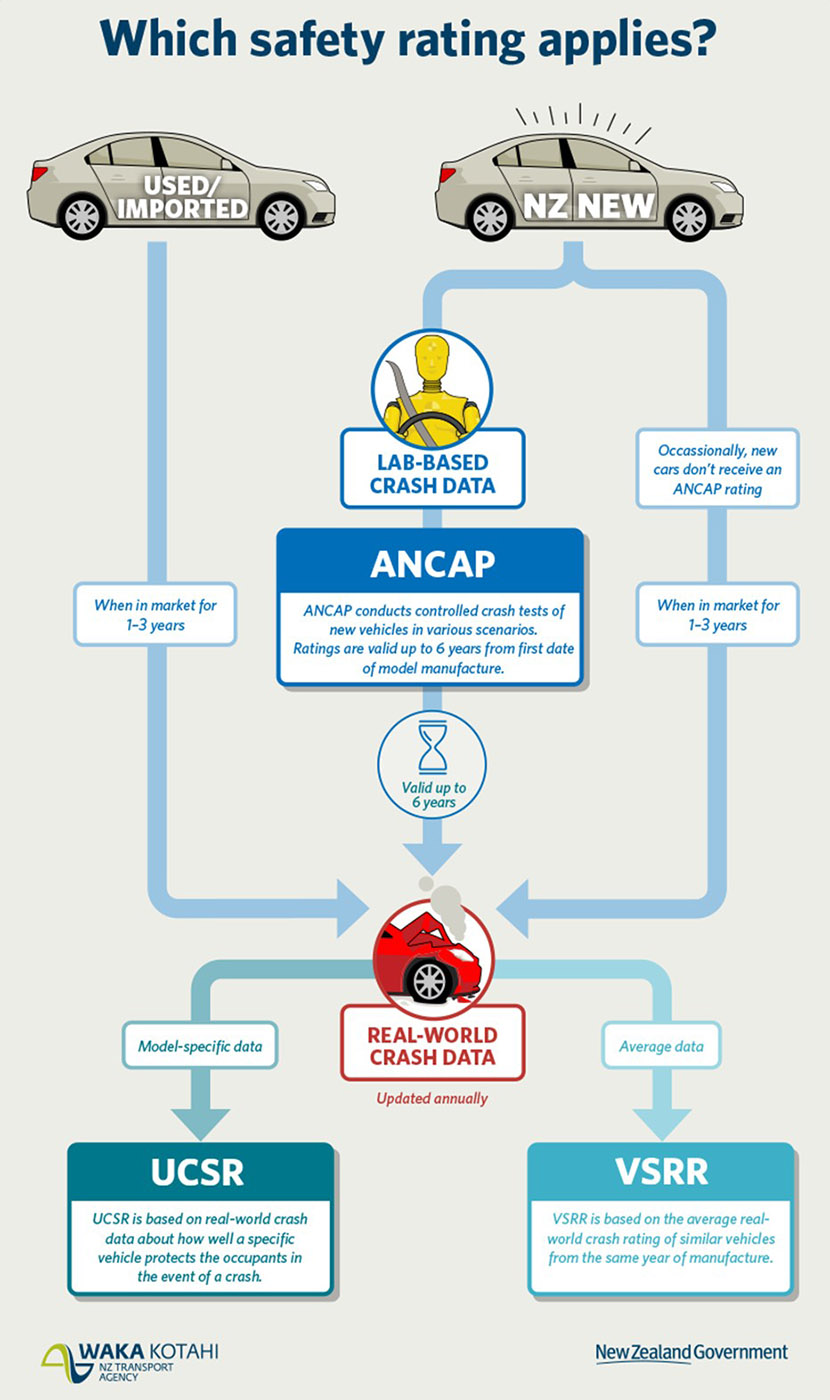 Make the safest choice within your price range

Once you’ve narrowed down your options, head to rightcar.govt.nz, where vehicle safety, fuel economy and emissions data are all collated in one spot. You can search the data by make and model, or enter the number plate of the car you’re looking at.