If you’re looking for a carbon fibre, gravel electric bike that can be customised for your needs, this Hybrid is a good place to start.

Hybrid bikes stand out in an overcrowded market with their lightweight carbon frames. That makes the frames stiff and leads into confident handling.

Hybrid bikes launched with a splash back in 2018 with their first models – the Speedmaster and Cruiser – performing well and earning our recommendation.

In an attempt to showcase the versatility of their frames, Hybrid recently sent a modified Speedmaster our way. By throwing on some new wheels, skinnier tyres and swapping the regular handlebars for a pair of droppers (bendy road ones), it becomes a gravel/road bike.

They didn’t stop there. By stripping back the parts like the rear racks and swapping for more carbon components, the Hybrid also went on a diet. We weighed it at 19.25kg, which is very light for a full-sized e-bike with a big capacity battery.

Basically, it's a more comfortable and versatile road bike. They’re designed so you sit slightly more upright and the steering is less twitchy. There's room in the forks to fit wider, more knobbly tyres and the gearing is more mountain focused (with easy gears for going uphill) rather than set up for out-and-out speed.

I’d argue that they’re the perfect do-it-all bike that’s at home on the road or light trails and is perfect commuter since the higher volume tyres make for a cushier ride than a regular road bike. I am biased though, I own an human-only powered gravel bike and love it to pieces.

Gravel is the latest craze in biking, but there aren’t many e-bike manufacturers out there who’ve jumped on board yet (Giant and Specialized have e-gravel bike models, but you'll need to order one in).

The Hybrid Gravel looks great in the flesh and fast when it’s standing still, though the slanting top tube takes some getting used to aesthetically. To accommodate the drop bars, the motor controller has been shifted next to the stem so you either need giant hands to reach it or the confidence to take your hand off the bar to change the settings. It has front and rear lights for visibility but no racks, so you need a backpack for commuting.

I used it on my 32km round-trip commute and had a real ball along the flat. I wasn’t dressed like your typical MAMIL, but I kept up with some really fit guys on my way home, averaging about 47kph on my way from the Wellington to Lower Hutt. I felt like an elite rider, but I was really a baggy-shorted fraud alongside these fitness freaks as I was putting in next to no effort. 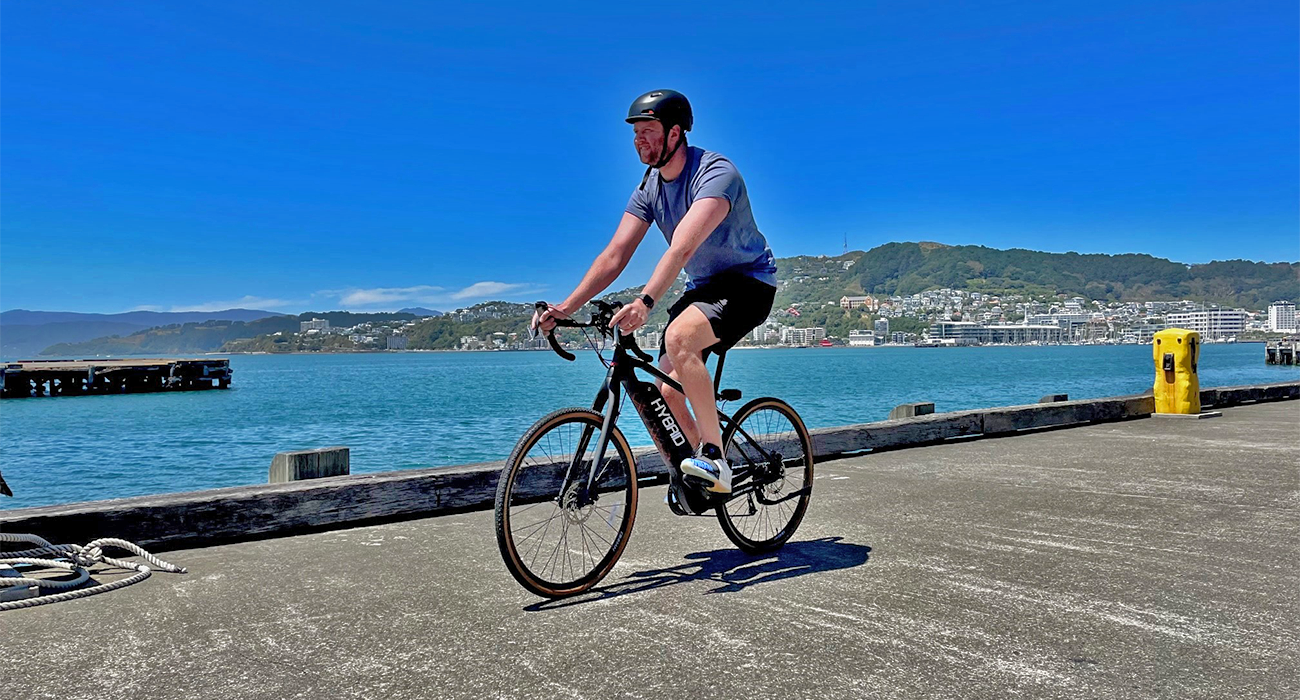 Things didn’t go so well when it came time to ascend up my steep 2km climb home. It’s a tough task for any bike to carry me up there, I’m at the upper end of weight limits for most of the bikes we test, and this road is STEEP. It turns out the cassette on this bike has more of a road flavour which means its more speed focused than easy climbing. I went up at a blistering 19kph up the hill, but I was really working to do it in the lowest gear available and the highest assist setting. I arrived home in a heaving, sweaty state. It was a real indictment on my fitness levels, but most other e-bikes are geared so I travel up at 13-15kph when pedalling at 90rpm, but I put in way less effort at the same cadence. I’d like to have that option to make it that little bit easier if I’m feeling a tad gassed at the end of a day. I asked Hybrid about the cassette, and they said it’s an easy swap at their end as these bikes will be customised for those who order them.

Coming downhill back to work the next day had me testing the handling at high speeds as well as the brakes. Luckily for me, both worked well. After making it back to work, I’d racked up about 32km of travel, most of it on the third assistance setting out of 5. The battery was showing it was still over the half mark so there was plenty left.

I also took the bike on a gravel path and a few easy grade 2 and 3 singletrack trails at Makara Peak. The bike handled them fine. It's no mountain bike, and you need to get used to riding offroad on drop bars, but as a gravel bike the Hybrid frame works very well off the seal. I had to turn the motor power down for riding offroad, to setting 2 or 3 of 5. Riding with more assistance was too much for twisty trails and limited grip!

This is a niche bike. Experienced riders who’ve ridden on drops and have the confidence to do it will enjoy themselves. You need to have the confidence and balance to be able to take one hand off the bars to change motor settings, and also have a bit of strength and fitness to tackle steep climbs (unless you swap out the rear cassette).

If you’re a chronically unfit roadie who’s struggling to keep up with the group, this could be a really good bike to keep you out and about with your mates without getting dropped all the time. It also works well as a quick commuter where you can tuck yourself down and out of the wind using the drop bars. At $7000 it’s cheaper than loads of unpowered road bikes, and this one has the versatility to go on lighter trails too.