Can you really buy 'ethical' chocolate?

It’s a hard road buying chocolate with a clean conscience.

It’s the sweet treat we spend millions on each year. But behind the glossy packaging, chocolate has a dark history. When reports of worker exploitation and child labour started hitting headlines 20 years ago, the industry promised to clean up its act.

A study released in October, funded by the US Department of Labor, found child labour on West African cocoa farms had risen 14 percent over the past 10 years. During the same period, there was a five-fold increase in children on these farms exposed to hazardous agricultural chemicals.

An estimated 1.56 million children work on cocoa farms in West Africa, mainly in Côte d’Ivoire and Ghana. The region is the source of about 70 percent of the cocoa that ends up in the chocolate we buy, produced by millions of farmers who live on less than US$2 a day.

There’s an environmental cost as well. In the West African rainforest, more than 2.3 million hectares were converted to cocoa farming between 1988 and 2007. According to a 2017 World Bank report, 60 percent of cocoa plantations in Côte d’Ivoire are in areas that were previously forested.

When the cocoa industry’s practices came to light, manufacturers began signing up to certification programmes in an effort to assure consumers their choc was guilt-free. Pick up a bar of chocolate and you’re likely to find a certification logo on the pack.

But these logos aren’t all made equal.

Only some are from independent certification schemes. Others are logos of manufacturers’ own programmes. Details of what the schemes pay cocoa farmers can be hard to find – and pay rates are critical in lifting households out of poverty and ending reliance on child labour.

Fairtrade is probably the most well-known logo you’ll find. It sets a minimum price that kicks in if international cocoa prices fall below growers’ costs.

In 2019, Fairtrade increased this price from US$2000 to US$2400 per tonne after research found rates weren’t high enough to keep households above the poverty line. It also pays farmer co-operatives a price premium (US$240 per tonne) to spend on community projects of their choice.

Fairtrade recommends chocolate brands pay extra to meet its voluntary living income benchmarks. Some companies such as Dutch-brand Tony’s Chocolonely — recently launched in shops here — are opting to do that.

Kiwi chocolate brand Whittaker’s used to have Fairtrade certification for two products. However, in April it switched to Rainforest Alliance, which certifies cocoa under its sustainable agriculture standard. The company’s 116 products carry the Rainforest Alliance logo.

Since April 2020, Rainforest Alliance has required a premium payment but it’s not a set amount. Instead, the payment is negotiated between buyers and farmers.

From July 2022, buyers will be required to pay a minimum price of US$70 per tonne to the individual farmer. Buyers will also need to make a “sustainability” contribution to farmer groups, either in cash or through other investment in the community.

Major manufacturer Mondelēz, the maker of Cadbury chocolate, has its own cocoa programme logo too.

Mondelēz doesn’t disclose how much it pays farmers for their cocoa and details of the programme’s standards aren’t published. The company said it pays a “loyalty premium” in most countries and a living income premium of US$400 a tonne in Côte d’Ivoire and Ghana.

The World Cocoa Foundation (WCF), which represents 80 percent of manufacturers, believes industry-funded programmes “are making a difference” and reducing child labour. However, major manufacturers are only monitoring about 20 percent of the supply chain in Côte d’Ivoire and Ghana.

The WCF said it’s “scaling up” these programmes to include more communities.

If you want to get the fairest choc for your money, your best bet may be to look for products that carry both a fair trade and organic certification.

A 2020 report published by the UN’s Food and Agriculture Organization and French research agency BASIC found chocolate with both certifications made more money for farmers. The study looked at the supply chain of chocolate sold in France, from cocoa farm to store, to see who got the greatest share of the value. 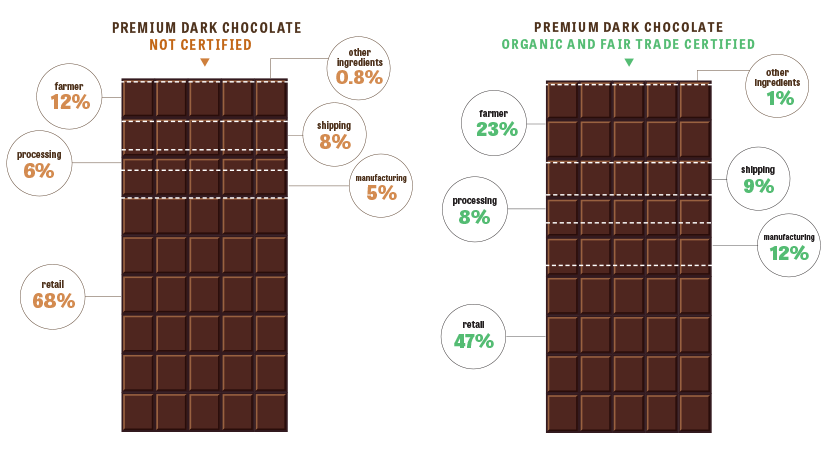 Source: Comparative study on the distribution of value in European chocolate chains. Food and Agriculture Organization of the United Nations and BASIC (2020).

Consumer demand has seen brands carrying these certifications increase but you may have to hunt them out.

We found five chocolate brands that carried both fair trade and organic logos.

In 2018, 2.7 percent of global cocoa farms were organic (322,000 hectares). While just over half are in Africa, Ghana and Côte d’Ivoire account for only 3.3 percent. Latin America is the other major area of organic cocoa.

Is certified chocolate all good?

If you’re buying certified choc, does it mean all the cocoa in the bar is the good stuff? Not necessarily.

The Rainforest Alliance scheme rules allow manufacturers to mix certified cocoa with non-certified. So, the bar you’re eating may contain 100 percent certified cocoa or none at all.

If you see Fairtrade’s standard certification logo on a product, it should mean the item is fully traceable from the farm to the shelf and isn’t mixed with non-certified ingredients.

On some products, the logo appears with an arrow. This signals the ingredients can be a mix of Fairtrade-certified and non-certified. If an arrow is shown on your favourite chocolate bar, check the back of the pack to see the percentage of Fairtrade ingredients it contains.

There are growing concerns child labour on West African cocoa farms is rising as a result of the economic impacts from Covid-19.


In a joint statement released in October, public interest groups in Europe, the UK, US and Australia estimated the pandemic had seen a 15 to 20 percent increase in child labour in Côte d’Ivoire and Ghana alone.

The groups said the economic situation in these countries had deteriorated significantly due to the pandemic, leading to fears conditions would worsen for cocoa farmers and their families.

Fernando Morales-de la Cruz, Cacao for Change founder, said the only way to end child labour in the chocolate industry is to increase the price farmers get. That can be done easily by increasing the price of a candy bar by 10 cents, he said.