How to clean your phone

Cleaning the outside of your phone is a good way to keep germs at bay, and cleaning the "inside" can keep it running smoothly.

For many of us our phone is a lifeline, so it’s important to keep it in tip-top shape. Given how often you touch your device and put it down on various surfaces, it’s no surprise it can harbour nasties. But it’s not just bacteria that you need to clean up – your phone can become bogged down with useless apps that diminish its performance. Here’s how to clean your phone’s surface so it’s healthy for you, and clean up its storage to keep it running smoothly.

We’re all being reminded to wash our hands (at least 20 seconds with soap), so it’s a good time to remind you to clean anything else you might touch while you’re in the bathroom, like your phone. In 2015, two-thirds of New Zealanders in a Colmar Brunton poll said they were fine with using their phone on the toilet. While they may wash their hands afterwards, they certainly don’t wash their phones.

You might be disgusted if you knew how dirty your phone is. We swabbed the front and back of some phones and grew the results in Petri dishes. We didn't go so far as test what was growing but it's clear there's definitely some life on there. Next time you clean your phone, make sure to give the back a good wipe – it’s got just as many nasties as the front. 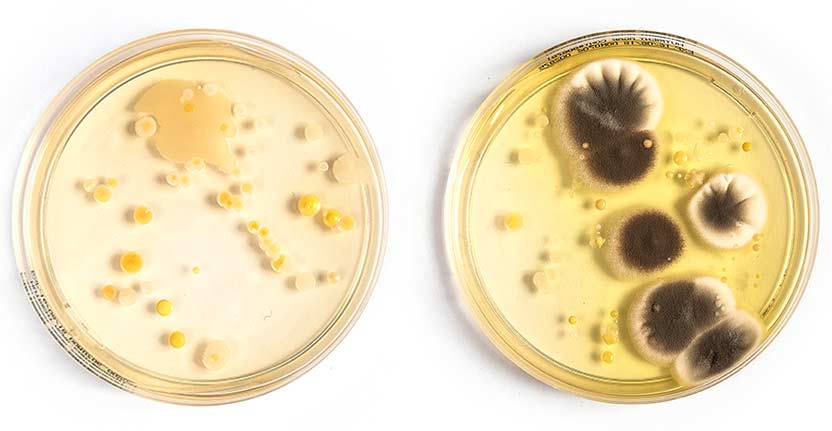 Bacteria swabbed from the surfaces of some phones. Left: screen, right: back.

Firstly, do not go out and buy up all the sanitiser you can find.

Most manufacturers advise using a soft, slightly damp, microfibre cloth. For a more thorough clean, add a small amount of isopropyl alcohol to the water (no higher than 70% alcohol), you can pick this up at a chemist or hardware store. Either option will remove most of the germs from your phone. Be aware that higher alcohol levels, such as those found in hand sanitiser, can damage your phone's screen so do not leave it on for very long.

Resist using antiseptic sprays and wipes, they damage your phone screen if used too often. However, there are some commercial cleaning sprays and wipes that have been formulated to work on mobile devices. Again, use these in combination with a microfibre cloth.

If you really want to nuke any bugs (for instance, if you were unlucky enough to drop your phone in the loo), you can spray it with bleach and then wipe clean with a damp cloth. You need to leave the bleach on for roughly 30 seconds, but no longer otherwise it’ll start eating into the screen.

If you use a case it gets a bit easier because you can remove the phone and then clean the case by itself. Just remember to let it dry completely before putting your phone back in.

Without getting too "Marie Kondo" about it, I guarantee there are apps on your phone you never use. You downloaded them thinking they’d be useful or fun, and then forgot about them. Now they just take up space.

While you could look through every app manually and decide whether to keep it, you can save time by letting your phone do the heavy lifting. Your mobile collects info on how often you use each app, how much data it uses and how much room it takes up. You can use that to choose what to delete.

On newer Android phones, under “storage” in settings, there’s a “clean up phone” option that will give you the option to remove unused apps and unneeded files. (Note on older Android models, this feature may exist under other settings.)

If you have an iPhone, you can use the “offload unused apps” feature (settings > general > iPhone Storage). Offloading means when you’re low on storage, the phone removes the apps but keeps any associated data in case you reinstall it.

Now you’ve cleared out what you don’t use, it’s time to tidy up the screen real estate. One of the best ways is using folders.

When you arrange your apps, hover one app over another and it’ll automatically create a folder. Folders are ideal for saving space and keeping things tidy. I keep all my messenger apps (Facebook, WhatsApp etc) in one, games in another, and so on.

If you have an Android phone your options are even greater. Not only can you make folders, but your apps can go in any spot on the screen’s grid. Moreover, you can add widgets. These are like smaller versions of apps that run on the screen without opening the full app. There are widgets that show your bank balance, what your daily calendar has in store, or just a Google search bar.

I asked my Twitter followers what apps they had in the bottom row of their phones.

For the record, mine are: Messages (texts), Spotify, Twitter and Camera.

The results were more interesting than I expected: for almost every person that meticulously selected their subset of apps, there was another who hadn’t changed their set-up since they first bought a smartphone, the apps having survived the transfer to multiple new phones despite little usage.

Some confided that “I don’t even really use [app]”. I was most shocked by one person who said “can you change those ones?”

Yes, you can and you should.

Those four apps (or five, depending on the phone) are the closest to your thumb, so can be opened quickly and without stretching too far. Because they stay on every screen you never need to search for them. If one of these spaces is taken up with an app you never use, change it!

I too have an older Android (which the article makes clear doesn't have some of these options). I long ago downloaded SD Maid as a means to cleaning unused data & other junk from my ph memory - there are other apps that do similar, & I always search the internet for feedback before trusting the sales pitch!

One simple one is 'Files Go' by Google, which gives you an option to look at unused apps & uninstall them on the spot. i.e. When you look at installed apps it tells you when it was last used, but discretion/care is needed as I noticed that some apps which are the unlock app for a paid version show as not being used whereas they authorise the added features you got when you paid to upgrade.

The other thing to remember, is that when you install an app from Google Play Store, it remains in your library & can be re-installed again. So if you have apps that you only use on certain occasions (e.g. Air NZ travel app) you can uninstall til the next time it becomes relevant. (N. B. If there is data attached to an app you will lose it, unless it is stored in the cloud & linked to your ID)

I found this advice (I have an iPhone) really clear and accurate - thank you.

Lyn B.
Clean up your phone

My Android phone does mot have a "clean up apps" feature under storage so how accurate is the rest of the information?

Consumer staff
Re: Clean up your phone

The clean-up instructions mentioned in the article exist for new Android phone models. For older models, you may have to look under other settings. We’d suggest Googling your phone’s model and “remove unused apps” for instructions specific to your phone.

"On Android phones, under “storage” in settings, there’s a “clean up phone” option that will give you the option to remove unused apps and unneeded files."
Sorry, there isn't. On my Samsung Galaxy J1 Ace the "Storage" button just brings up memory usage data under "Device memory" and "SD card" headings, with the only action options being to unmount or format the SD card. So I remain stuck with unwanted garbage cluttering up the phone memory (there's plenty of space on the SD card but a lot of apps like Google Play won't use it).