How to save hundreds on your power bills in 3 minutes

For the past three months, the median amount people could save using our Powerswitch website has been $385 a year.

Power prices may have gone up this year but so too has the amount you can save by switching provider.

For the past three months, the median amount people could save using Consumer NZ’s Powerswitch website has been $385 a year. That’s up 24% on the same period last year.

Powerswitch’s manager, Paul Fuge, said there’s a lot of competition in the market at the moment, leading to big savings for those who take the time to check.

Queenstown was where the most savings were found – the median saving people were finding there was $624 a year. Tauranga had the next biggest savings, at $595 a year.

Fuge said some new power companies are offering better prices while some existing providers have new plans that let people save by moving some of their electricity consumption to cheaper off-peak periods or chosen ‘free’ periods.

“It’s a bit confusing because prices in general have gone up around 4% but some companies have put prices up more than others and some haven’t put them up at all,” Fuge said. “It’s like when the price of beer goes up but if you look you can still find some cheap beer deals.”

Unlike with beer, though, all power is the same quality – so you might as well be getting it for the cheapest price.

“I was ropable when my own power company whacked my prices up recently,” he said. “I chose my current retailer and plan a couple of years ago and at that time they were cheapest for my needs. But that’s no longer the case. From Powerswitch I can see a plan with another provider that's around $350 a year cheaper. “

Fuge said it shows you can take action: “People often feel a bit powerless when it comes to paying for power, but they have more power than they realise with the ability to change retailers.”

He has seen some Powerswitch users stay with their current power company but save 20% by changing the plan they’re on.

Those who switched using Powerswitch over the last three months will save a combined total of around $2 million over the next year. However, we know the real savings from using Powerswitch will be higher, as some people use the results to ask their power company for a better rate. 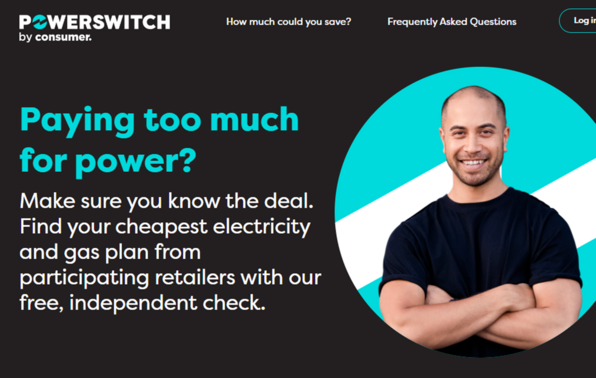 Powerswitch is a free service that makes it easy to compare plans from power companies, so you can find the cheapest deal for you. The switching process is taken care of by the power company you choose and usually takes 3-4 days.

See how much you could save