We think Pizza Hut’s and Domino’s delivery prices are so opaque they risk breaching the Fair Trading Act.

Convenience comes at a cost, but you may not realise quite how much when you order in. Prominent pizza brands Domino’s and Pizza Hut hike up their pizza prices if you’re having them delivered. So not only could you be up for a delivery fee, you’ll also pay more for your pizza as well.

And it’s not just the pizzas – the price of every item in your cart, even a bottle of Coca-Cola, increases if you have your order delivered. So, you could inadvertently end up paying significantly more for your delivered order than if you picked it up.

Although Domino’s doesn’t charge a separate delivery fee like Pizza Hut does, each delivered item is more expensive than if you picked it up.

But neither company’s website makes it clear that customers are paying extra for every item in their basket if they choose to have them delivered.

Hell Pizza, on the other hand, is positively angelic with its pricing and is totally upfront about its delivery fees.

The price differences left a bad taste for Graham and Angela, two Pizza Hut customers who contacted us after noticing them.

Angela went online to order a pizza to be delivered. She then changed her mind, deciding to pick it up instead. She noticed that the delivery pizzas were several dollars dearer than the pick-up pizzas – and this was on top of the delivery fee.

“If the true delivery is higher then why don't they just say so, instead of allowing the customer to think that it’s $7.99 for delivery?” Angela asked. “I was annoyed to see this as it seemed to be hidden extra costs which is unfair to the consumer.”

Graham had an identical experience.

“My immediate reaction when I realised there was a pricing difference was feeling both misled and annoyed. For a large company like Pizza Hut to not be upfront about additional costs I thought was unethical and misleading.”

Both customers said they have no problem with a higher delivery fee if that is the true cost of the service. The issue is with the higher prices not being clearly disclosed to the customer.

“Why does it cost more to make a pizza that’s being delivered?” Graham wondered. “Or is it that $7.99 doesn't cover the actual cost of delivery so they are hiding the extra cost within the product price, as customers would see a delivery fee of $20 to be unreasonable? Or is it deliberate misleading advertising so that we believe the only additional cost is the $7.99?”

So, is this legal?

The Fair Trading Act (FTA) prohibits traders from making false or misleading claims about the price of any goods or services.

Pizza Hut’s website clearly states the delivery fee is $7.99, but it isn’t. To get your order delivered, you’ll need to pay higher prices across the board at Pizza Hut.

Domino’s isn’t much better. Its website gives the impression there isn’t a delivery fee. But in reality, there is a fee – it’s just hidden in the cost of the items being ordered.

We consider these pricing practices risk breaching the FTA.

We asked Pizza Hut for comment but did not receive a reply. However, the question can be found buried in their website’s FAQs section: ‘Why does it cost more to deliver?’ and features the following vague answer:

‘Due to the increasing cost pressures including labour rates, price of ingredients and extra costs associated with getting your meal delivered, we have made the decision to make some price adjustments to selected items and deals.’

Asked about this issue, a Domino’s spokesperson said: “As experts in the food delivery space, we are committed to simplifying our business and removing conditions and charges wherever we can … Our delivery cost is integrated into the price of each pizza to cater for the extra labour and fuel charges required for a delivery, with the majority of this cost applied to the first pizza in the basket. This integration means that the price of a delivered pizza will increase when compared to the price of a pick-up pizza.”

Our staff tested this, and it was the most expensive pizza in the basket that incurred the highest fee, not the first pizza as stated.

A Mega Pepperoni costs $8 to pick up, but more than doubles to $18 if delivered. A second of the same pizza costs $11 for delivery in the same order – still $3 more than if picked up. 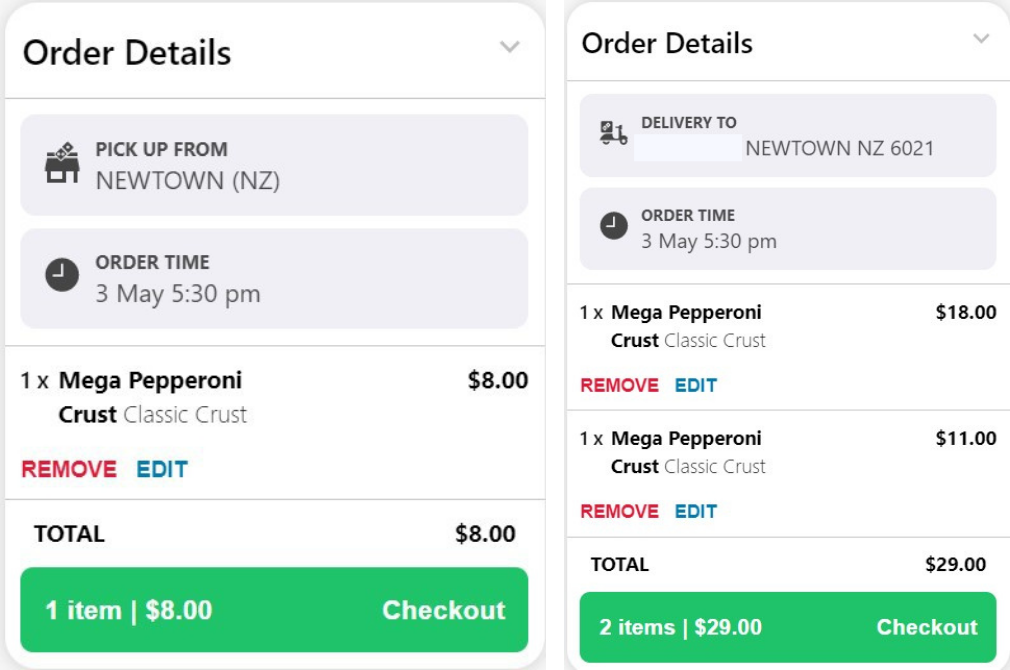 Our view on the cheesy issue

Businesses need to be upfront about their prices so customers can make informed purchasing decisions. We think Pizza Hut’s and Domino’s delivery prices are so opaque they risk breaching the Fair Trading Act. We’ll be lodging a complaint with the Commerce Commission to let them know.