How supermarkets tempt us to spend more

Supermarkets are carefully laid out to part consumers with as much cash as possible. We explain the common tricks of the trade.

Ever walked out of the supermarket wondering how a quick trip for a few basics ended with you pushing an almost laden trolley? Don’t beat yourself up. Supermarkets are masters at making us spend and not much is left to chance.

Stores are laid out so you spend as much time as possible in the aisles before you hit the checkout. That’s why you’ll often find household staples located aisles apart. If you’ve just popped in for bread and milk, you may have to tramp the length and breadth of the store to find them.

The more time you spend in the store, the greater the odds you’ll be tempted by the subtle – and not-so-subtle – cues steering you towards particular products or prompting you to throw something extra in the trolley.

It’s easier for products to catch our eye when they’re at eye level. It’s no accident items commanding pride of place on supermarket shelves will also be good earners for the stores.

Manufacturers want their brands in the best positions and can pay big bucks to ensure this happens. (If a product isn’t delivering good returns for the store, you can be sure it won’t keep its place for long.)

That’s why you won’t find budget buys in prime position. You’ll usually have to stoop to the lower shelves for products that offer better bang for your buck.

“Special” signs have become the new normal in supermarket aisles. These bargains also feature prominently in the stores’ advertising.

Multi-buy discounts – buy two loafs of bread and get a $1 discount – are another common lure. Who doesn’t want to save a buck, right? But while you’re paying less for each loaf, you’re buying more than you intended.

We’ve also found products can be on promotion so often that the “special” price isn’t really all that special. The same product may be “discounted” for weeks.

Along with “special” offers, you’re likely to see other promotional flags in stores with phrases such as Countdown’s “Great Price” or New World’s “Everyday Value”.

These signs entice you to buy but don’t assume the product is any cheaper than it was the week before.

Countdown’s “Great Price” and New World’s “Everyday Value” signs are used to highlight products that have been at the same price for months.

Souped-up displays at the ends of the aisles are another lure to get you to buy a little something extra.

They’re the perfect spot for product promotions. They give brands a prominent location to promote their wares and increase the odds shoppers will pick up an item as they wander by. To help seal the deal, products in these displays are often marked as “specials”.

Temptation can also be waiting at the checkout.

Chocolate and other sugary snacks have long been staples at checkout displays. After coming under fire for this practice, stores have diversified their checkout spreads. There are snack-free checkouts but you may have to make an effort to find one.

In June, Pak’nSave Mangere pleaded guilty to six charges of breaching the Fair Trading Act. The charges were laid by the Commerce Commission after its investigation found the store was charging higher prices at the till than those advertised in promotional offers.

The commission claimed the supermarket’s promotional prices – advertised in-store or online – didn’t match the checkout price on six occasions between June and October 2018.

Supermarkets are no strangers to complaints. In 2019, the commission received 151 fair trading complaints about them. The stores have also featured high on the commission’s list of the most complained-about traders in previous years. Pricing practices dominate complaints.

If you think a supermarket has misled you about a product price, report it to the commission. Let us know too. 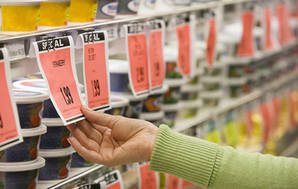 Richard John A.
Take your time !

I consider myself a shrewd shopper. One item - that I love - is Griffin's Ginger Nuts. Normal price for a single pack about $2.79 but on special at 2 for $5 or sometimes even 2 for $4. A DOUBLE pack of the self same item retails at $3.99 and is often on special at $3.49. I wonder how many get "conned" by the supposed "specials" with regard to purchasing 2 single packets ? Crazy !
John A

I notice at my local Supervalue store they now have same coloured special tickets on items that are NOT discounted at all. Very annoying as you get used to looking for special prices for item on your list. I now read every one. Isn’t this false advertising???

I can see from the mailer online (https://riverton.store.supervalue.co.nz/catalogues) that Supervalue are using a blue thumbs up for price promise, and a yellow light bulb for specials. I am not sure what colour the stickers are that you mention.

It is possible that people have been trained to think of at certain colour stickers with certain offers at Supervalue. If you think Supervalue are deliberately trying to confuse people with this, then it is possible it could be a breach of the Fair Trading Act, which you can report to the Commerce Commission using the Make A Complaint section on the top right of the home page at: www.comcom.govt.nz

I regularly shop online and have asked for them to not bag anything. There is an option at the checkout screen to choose no bags - but the paper bag option is ticked by default. They just have everything in the trolley ready for pickup and I pack everything into containers that I keep in the boot of my car, so I have nothing to dispose of or recycle.

Madalene F.
Other issues to watch for at the supermarket

If an item which isn't in the promo mailer as a special, but has been stickered instore for quick sale - usually because it is close to its use by date, be sure the original barcode has been struck through horizontally rather than vertically, otherwise you can end up paying the full price. Not all checkout operators know this and simply ran the item over the barcode reader. And always check your docket before leaving the supermarket carpark. Huge mistakes can happen, eg if the checkout operator inadvertantly puts their hand on the weighing plate. I was recently overcharged $11 on bulk figs when this happened. And also look out for double swipes of the same item. These are not necessarily deliberate actions, but can be expensive mistakes for you.

In regards to the delivery fees that Countdown charges, good to know for consumers that you can buy a delivery saver for $69.00. This will last you three months, so comes to just over $5.00 each time based on one delivery per week. You can order as many times as you want in this period, as long as you spend $80.00 or more. Very convenient if you have forgotten a couple of items or you have unexpected guests arrive. This option obviously suits consumers that do online shopping all the time like us.

I'm interested to note that you pointed this out in 2018 yet in a Consumer report on on online grocery ordering in 2020,it is still not mentioned about the Delivery Saver. Come on, Consumer: get your facts right.

Ronaldo
Incorrect pricing at the check-out

Always check your receipt before you leave the supermarket! Sometimes specials don't get updated at the checkout so you get charged the normal price instead of the discounted special price! Once you are home it is a significant hassle to try to resolve being overcharged.

Countdown have a policy of refunding the full purchase price of the first item purchased if it is incorrect at the check-out (note, you have to pay the incorrect price to get the full refund). While it is not great to be over-charged I think this is fair compensation for the inconvenience.

My local Pak 'n Save on the other hand will simply refund you the difference. This is extremely annoying as it takes about 10 minutes to resolve - not great if you are in a hurry - and all for the sake of small change (usually less than a dollar). It also gives Pak 'n Save little incentive to ensure they are charging correctly at the check-out, putting the burden onto the customer to see they are charged correctly. It got to the point where I was being overcharged on at least one item virtually every visit to Pak 'n Save. Thankfully it has improved but I wish they would adopt a similar policy of refunding the full price of the item to communicate that they take the issue seriously.

It is true that the sale prices are sometimes not updated, I wonder how many people don’t check and pay a higher price. I know it’s a hassle to get a few cents back but I hope it will mean they update the price so all those after me get a fair deal.

Often the refill item is more expensive than the original. Be aware of refills being a smaller size i.e. Maccona refills for their 100gm bottles are only 90gm they are also more often than not more expensive.

Super convenient but come in so many plastic bags, I asked if they could do a reusable bag swap system but they were NOT interested.

We also do our shopping online with Countdown. We request for our groceries to be packed in boxes and this is how we receive them every week. No more plastic bags!