Screen tech can be the most confusing part of a television, here’s what to look for.

Obviously, the screen is the most important part of the TV. Because of this, every manufacturer will say their screen-tech is the best and will hit you with confusing nomenclature.

Regardless of the jargon, all TV screens are, essentially, a big field of dots called pixels. Each dot can turn into a certain colour, and they all combine to create the image on screen. This means that how many dots there are, and how well they recreate colours (especially black and white), are very important.

Instead of listing the full resolution, the standard resolutions are abbreviated. For example, 4K and UHD (ultra-high definition), which are used interchangeably, mean 3840x2160 pixels. In the next few years there’ll be 8K (7680x4320) screens available.

Some TVs can “upscale”, which means they can take a lower-resolution image and turn it into a higher-resolution one. While this generally makes older content look better, this feature won’t always hit the mark.

You might see “native resolution” used in technical descriptions. This is the resolution the TV is made to display, and should be best at.

For the past 10 years the standard has been LED TVs: these have LCD (liquid crystal display) panels creating the colours with LED (light-emitting diode) backlighting providing the brightness. The lighting is either “edge” or “array”, meaning the LEDs are either around the edge of the screen pointing in or in a defused array across the screen. The former makes for thinner TVs, but the latter gives a better picture.

OLED TV screens are becoming more common than LED and are often used in phones. They’re flat and provide their own light source, meaning the panels don’t require extra backlighting (this means the screen can be very thin). OLEDs can also create better contrast than an LED TV, because if an OLED dot turns off, then it’s black and not almost-black.

Think of it like this: if each pixel on the screen is a dot of paint, then an OLED uses black dots to show black, while an LED TV will have no paint. No paint would mean light from behind could come through.

QLED is very different from OLED in how it produces colour but, from a viewer’s perspective, the results are essentially the same. QLED screens are mostly used in Samsung TVs.

A useful rule of thumb is for the screen to measure a third of the distance from where you’ll sit to watch it. If your couch is 3.5m from the TV, then the best screen size is 46 inches (116cm). With the newer screens and higher resolutions you can go one or two sizes bigger if you want to, and the experience should still be good.

Also note that TVs in stores look smaller than they will in your living room. You may bring home your new 50" TV that seemed reasonable in the shop only to find it's far too large for your house.

The newest selling point for TVs is HDR (high dynamic range), which is all about colour and brightness. An HDR picture has more colours and displays a higher luminance range than a regular HD TV image. Think 16 million colours is a lot? Wait until you see 16 billion.

An HDR TV can show images with very bright and very dark sections without over- or under-exposing either of them. So an image of a moonlit forest won’t just be sections of bright white and sections of solid black.

Picture an erupting volcano. An HDR image captures both the bright tones of the lava and the details of the dark mountain without under- or over-exposing the picture. Similarly, a scene in a forest that might be a flat dark image with few visible details on a non-HDR TV, would abound with depth and life in the HDR version.

The terms used are “colour volume” or “luminance” but shouldn’t be confused with the normal brightness control on your TV. Brightness raises or lowers the intensity of the whole screen, whereas detail stored in an HDR image changes the relative intensity down to an individual pixel. Colours on a TV can be mapped with 3 values: luminance, chroma, and hue. Chroma (often denoted as ‘u’) and hue (‘v’) create the base colour palette and luminance adds intensity. “Colour volume” refers to the level of luminance. An HDR picture has more colours and displays a higher luminance range than a regular HD TV image.

Unlike resolution, HDR isn’t a measurable thing, instead it depends on the screen type and the standards the TV supports. OLED and QLED screens are the best for HDR images, but standards are more nuanced.

The standards are created by companies, such as Dolby, and are how they encode their content. For example, Netflix uses Dolby to encode its HDR, therefore Netflix’s HDR shows look best on a TV that can read Dolby’s format. That said, if your TV doesn’t use the same format as the show, it will still look good, just not as good.

The UHD Alliance is an industry group of creators — including Netflix and the major film studios, alongside Dolby and Technicolor — and TV manufacturers that created base-levels for what they considered a “good” TV. TVs with an Ultra HD Premium logo meet the alliance’s standards for resolution, HDR, peak luminance, black levels and wide colour range, along with measures for sound.

This standard doesn’t define if a TV is HDR or not, but just if it’s good enough to get the tick of approval.

To get the official tag from the UHD Alliance, an HDR TV must have a minimum of either:

What to watch in HDR

In New Zealand, Netflix is the only real player at the moment when it comes to getting your hands on HDR content. So if you have a connection of 25Mbps or faster — VDSL or fibre connections — an HDR TV and have signed up to Netflix’s Ultra HD plan, you’ll be able to watch Netflix’s HDR shows. There are a growing number of Ultra HD Blu-ray discs, though you’ll need a player that supports HDR.

Content can be mastered with particular HDR protocols, so while they’ll look good on any HDR TV, they’ll look their best on a TV that uses the same protocol. For example, Dolby have been collaborating with studios to create Dolby Vision. A range of film and television titles are already available in this HDR format.

Do you like watching sports or anything else with fast-paced action, such as playing video games? A TV with a fast refresh rate is what you want.

The rate’s described in hertz (Hz) and it shows how many times per second the image on the screen changes. So a 60Hz rate shows you 60 images per second.

The faster the refresh rate the sharper the images, even if the action on screen is moving quickly. However, while it’s great for sport, a faster refresh rate can make movies and TV shows feel too "flat" and "crisp" because motion blur is removed. (The standard rate for film in a theatre is 24 frames per second which would be roughly the equivalent of 24Hz.)

Some TVs come with a feature called “motion smoothing” or “video interpolation” and it makes movies look terrible.

Motion smoothing interpolates extra frames into whatever you’re watching in order to create less motion blur, which, like a high refresh rate, is great for sports. However, this can ruin movies shot at 24 frames per second, making the action look flat like it was shot on a video camera; which is why it’s sometimes called the “soap opera effect”.

I’m taking a quick break from filming to tell you the best way to watch Mission: Impossible Fallout (or any movie you love) at home. pic.twitter.com/oW2eTm1IUA

Motion smoothing is usually on by default, but you can turn it off. You can find the controls under advanced picture settings in your TV’s menu, but each manufacturer has a different name for it. Look for words like TruMotion, Motion Rate Supreme, or Motionflow.

The standard unit of luminance is a candela per square metre (cd/m²) or more commonly called a “nit” (1 nit = 1 cd/m²). Nits are how TVs (and other screens) measure their luminance range. The more nits, the brighter the picture. The ultimate goal of manufacturers is a TV with a range of 0 (black) to 10,000 (white) nits.

TVs are usually turned up very bright in stores to compete with other TVs around them. It’s unlikely you’ll need this level of brightness at home.

On LCD sets check how the picture looks if you step to the side or move up and down. Viewing angles have improved, but some models still have a dimmer picture when not viewed centrally – important if several people are watching at once. 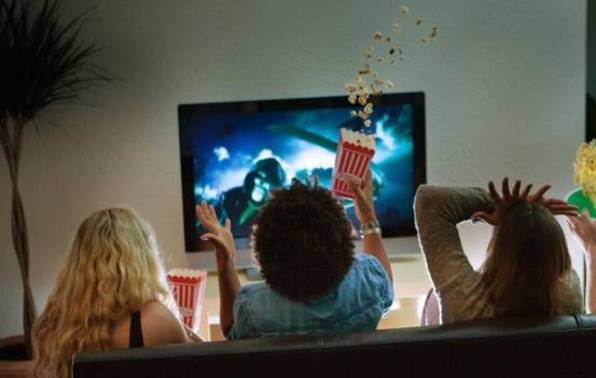 Compare TV reviews and specifications, and find out more about the features to look for.