Parents have doled out a whopping $22.6 billion in financial support to their children.

Consumer NZ research found that 14% of all families have supported their kids financially to buy a property and assisted them with an average contribution being $108,000. This equates to roughly 208,638 parents. The most popular form of assistance was contributing towards a deposit, with more than half (61%) of parents helping in this manner. Three out of five parents don’t expect to be repaid.

“We’ve reached a point in New Zealand where it’s no longer enough to do all ‘the right things’ to buy your first home – to get a job with a good income, save furiously and cut back on the ‘nice to haves’,” said Gemma Rasmussen, head of campaigns and communications at Consumer.

“The role of the Bank of Mum and Dad is more pivotal in the first home buying process, but it also means that we’re seeing a greater social divide of who gets to buy a first home, and who does not.

“The overwhelming majority of parents (87%) either offered to or were happy to help get their children on the property ladder. There is recognition that a first home purchase isn’t as straightforward as it was 20 years ago, which is why many parents are so willing to help.”

Listen to the podcast

In this episode, we're joined by economist Shamubeel Eaqub and recent Bank of Mum and Dad beneficiary Thomas Swain as we ask what effect the BOMD is having in Aotearoa. 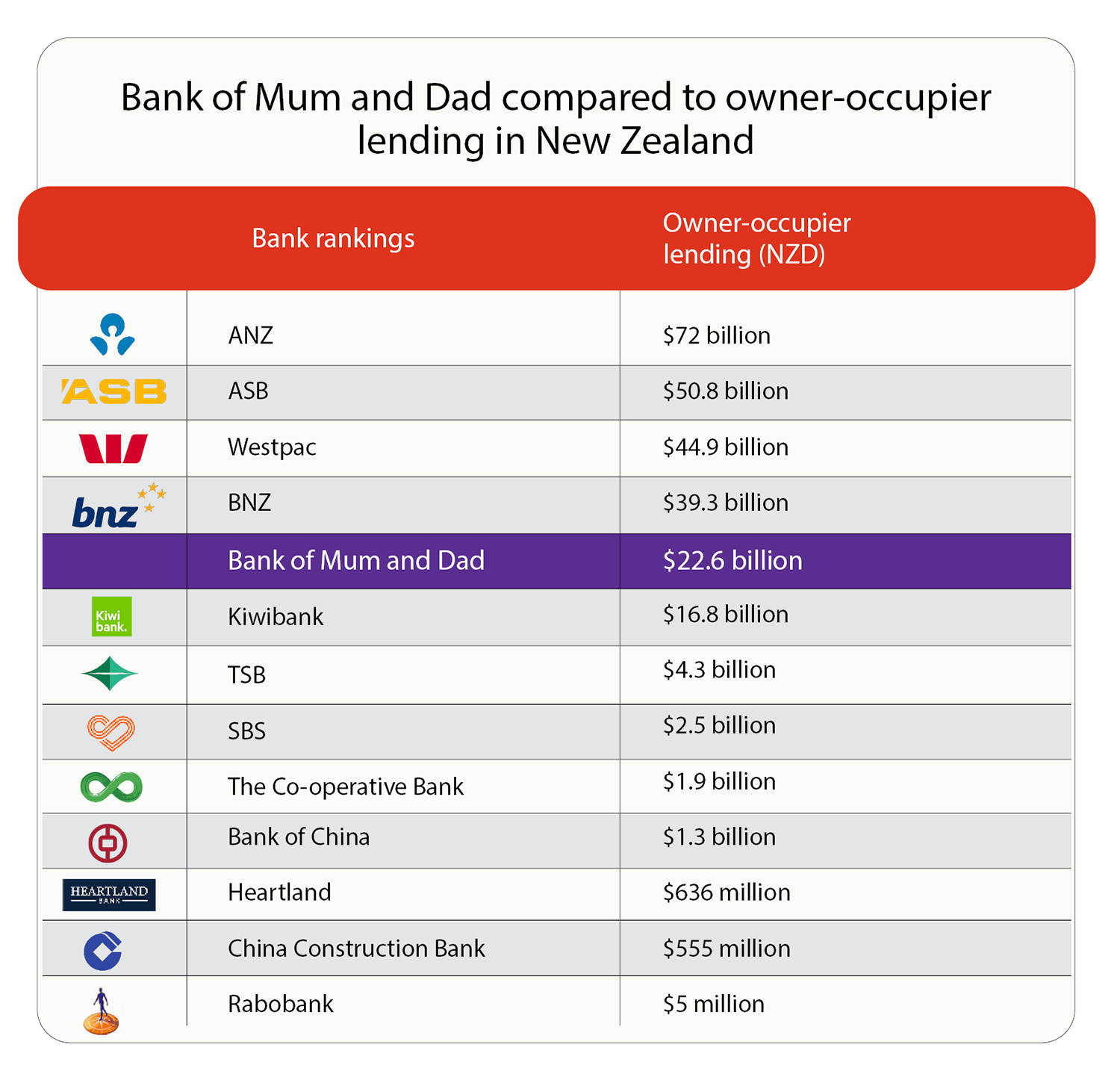 The most popular form of parental assistance was contributing towards a deposit, with more than half (61%) of BOMD parents helping in this way, but many parents helped in multiple ways. This isn’t to say that some parents’ offer of assistance didn’t come without strain. For one in 10 parents, their financial contribution put them under moderate to serious financial strain.

What type of financial assistance have you provided?

The majority of parents (62%) dipped into their own savings to help with a home deposit, but nearly one in four cut back on expenses to make their contribution possible. With home ownership becoming a more remote dream for many New Zealanders, some parents are pinching finances in an effort to get their children on the ladder. That said, 61% of parents said it was ‘no financial strain’ to help their children.

In what way did you cover the cost to support your child in buying a property?

Three out of five parents didn’t expect their contribution to be paid back. Of those who did expect repayment, 82% expected to be repaid in full. For parents who had children on a repayment scheme, the majority reported that their child or children were making repayments as expected. 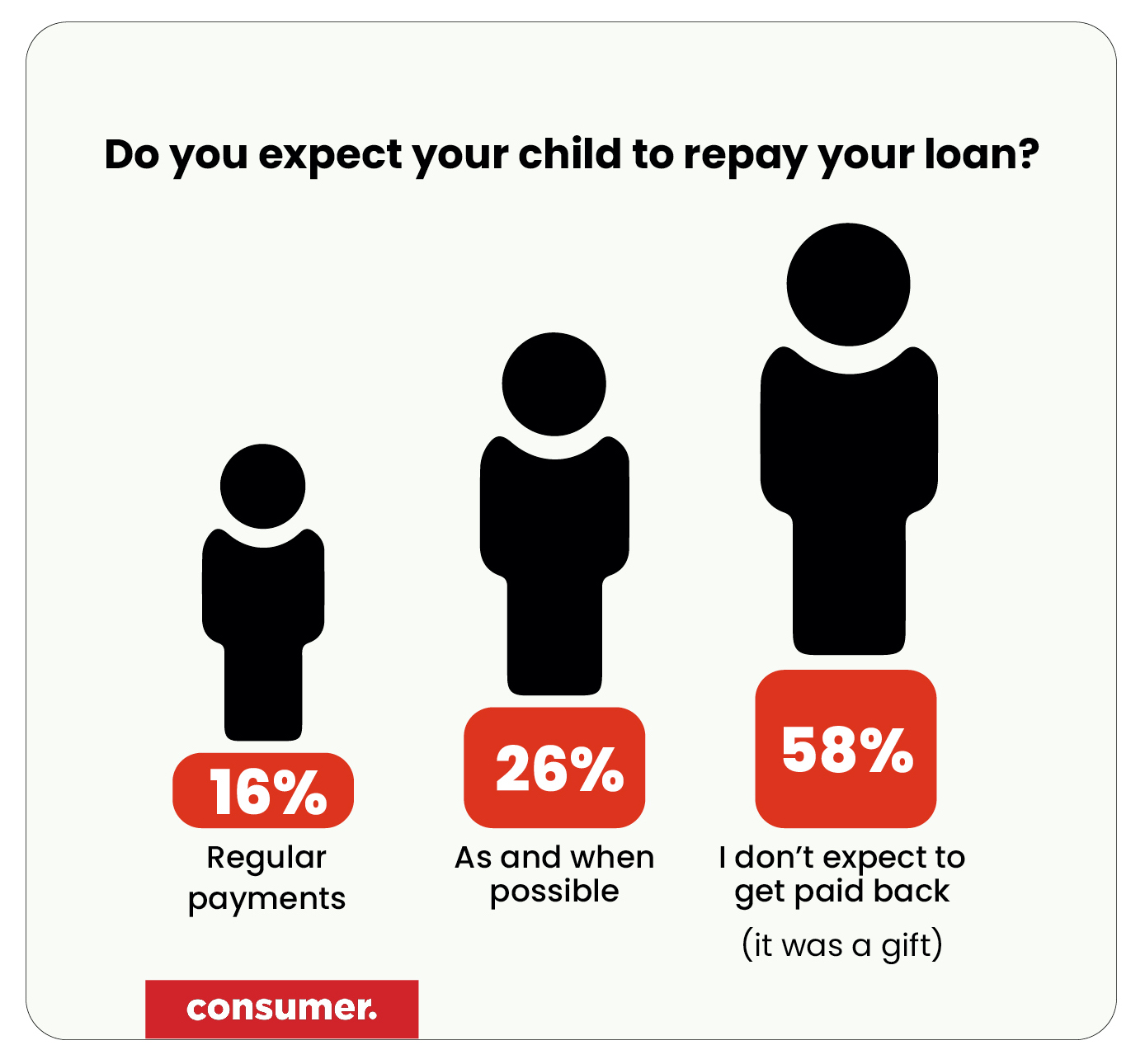 More than half of parents offered assistance to multiple children. The majority (64%) offered an even level of contribution to all children but 36% offered different levels of support for different children. The most popular reason was that one child needed more financial support.

Why did you offer your children different levels of support?

In Auckland, parents were significantly more likely to assist their adult children, with 58% lending a hand. They lent close to $20k more than the national average, but this could be due to the higher than average house prices.

That said, Auckland parents reported twice as much moderate or serious financial strain (19%) compared with the national average (10%). Part of this reason could be because Auckland parents are more likely to leverage their existing property and cut back on expenses to cover the costs.

Many without property are feeling locked out

Nationally representative research found that more than half (58%) of New Zealanders who don't own property consider themselves to be locked out. A common issue facing one in four home buyer hopefuls was that they were saving for a deposit but couldn't catch up.

Consumer sentiment over the past year has found that approximately three out of four New Zealanders consider the housing market to be over-inflated or out of control.