Use your ceiling fan for cheaper heating

Using a ceiling fan alongside your heater can save you money and make you feel more comfortable.

Your ceiling fan needn’t gather cobwebs over winter. Our hack will have you using your fan year-round and might even help reduce your power bills when the temperature drops.

The downside of heaters

Most heaters heat a room by convection – heat rises, so the air close to the ceiling warms up first. If you have a high stud, it’ll take even longer for the warmth to reach you. By the time you’re feeling toasty on the couch, the ceiling will probably be sweltering. This heat is eventually lost to your roof space.

How can a ceiling fan help?

Ceiling fans often have a winter setting, where they run in reverse. This draws cooler air from lower in the room, so warm air pooled at the ceiling will be forced down to replace it. The fan doesn’t need to run at a high speed, just enough to create some air turbulence in the room.

How we tested our theory

We installed a ceiling fan in our 2.4m-high test lab, which has a 2000W convection heater set up next to a wall – just as you would in your home. To start, we set the thermostat to 18.5°C and measured how much power the heater used over an hour. We also assessed the temperature profile across the room to see how even the heating was. Next, we turned our ceiling fan on to its winter mode on its lowest speed and repeated the process.

A ceiling fan will save you money

Without the fan, our heater used 1.7kW to maintain the temperature at 18.5°C. With the fan spinning away in reverse, power use dropped to 0.7kW. So we saved a full kilowatt over an hour – that’s a 58% saving. In terms of running costs, this went from 44¢ per hour down to 18¢. Scale that up to over an entire winter of heating and the savings you stand to make can be huge.

The fan also used some power, but not much. We measured it at a measly 9W (less than a quarter of a cent per hour).

A fan will make you more comfortable

The temperature profile across our test lab completely evened out. Without the fan, the ceiling was almost 30°C, while the air gradually cooled as it got lower. This affects your feeling of comfort as you end up with a hot head and cold feet.

The fan totally changed this. The temperature evened out and the only hot spot in the room was the heater itself. 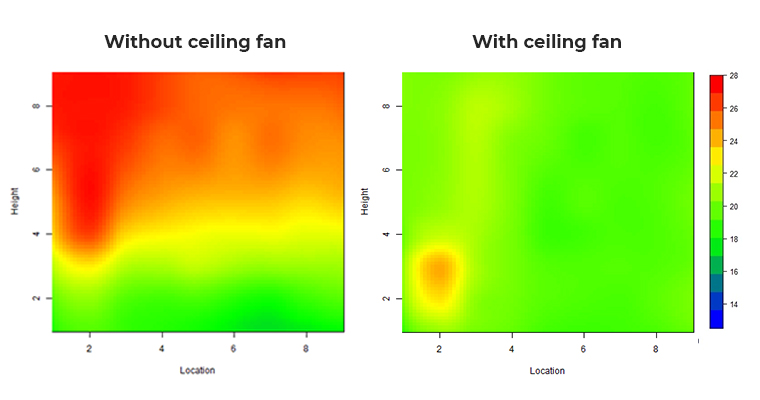 How to use a fan in your home

This hack also works with other forms of heating (especially woodburners). Even heat pumps and fan heaters, which do a pretty good job of evenly spreading the warmth, can end up pooling wasted heat up high. Don’t have a ceiling fan? Use a plug-in pedestal fan next to your heater instead. It’ll help spread the heat through the room faster and more evenly, and still should help you save on power.