Not sure what kind of wireless speaker to buy? We weigh up two superb speakers with very different roles - one smart, the other portable.

A top smart speaker faces off against a top Bluetooth speaker. What is each good at, and how do they differ?

The wireless speaker market can be split into two camps: “smart” models that connect to your home WiFi network, and those that don’t. Both types are all about playing audio from the internet, but it’s a mistake to conflate them – they have different benefits and drawbacks.

We’ve taken two of the premier speakers from our testing – one WiFi and one Bluetooth – and delved into what makes them good. Looking at the two side by side, you might not pick that the portable Bluetooth model is on the left. 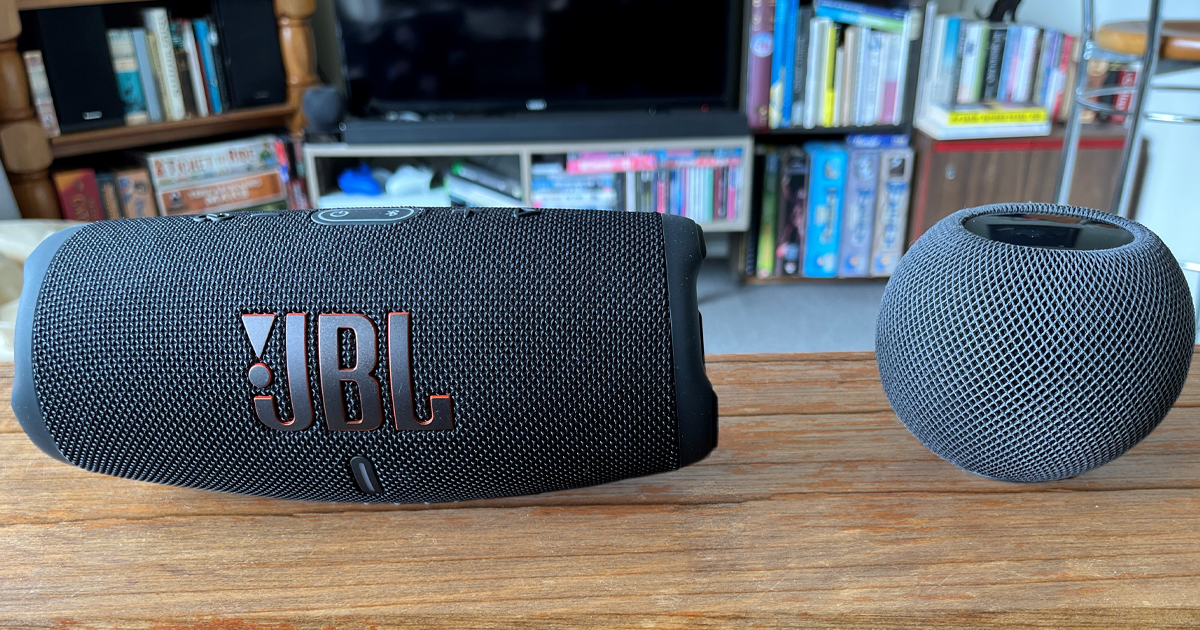 ✔ Can use it outside the house, using battery power and Bluetooth.
✔ Easy to carry between rooms.
✔ Stronger bass sound, and slightly better audio detail.
✔ Compatible with Android and iOS devices.
✔ Water and dust resistant.
✔ Good battery life.
✔ Excellent audio.
✔ Great ease of use.
To see how this model compares to other Bluetooth speakers check our test results

This speaker delivers excellent audio, with fantastic bass and rich detail. The sound didn’t grate on my ears at all, even after hours of listening.

I noticed the speaker was better suited for a corner of the room, rather than the centre. It’s not directional as such – sound comes out all sides of the cylinder – but the audio seemed to sound best right in front of the JBL logo. On the sides, bass felt more pronounced and at the “back”, the mix was a touch muddy.

Bluetooth pairing worked first time. User feedback is done well – all the system sounds are pleasant, and the physical clicking buttons are more satisfying and reassuring than touch controls would be. Buttons include volume controls and track skipping, which keeps you from looking at your phone as often. It’s also sturdy, and feels solid and well-constructed in your hand.

The battery life is outstanding. Its huge 7500mAh capacity translates to 20 hours of background noise, or a bit less at higher volumes. You can tell at a glance how much charge is left from a small LED bar on the front.

JBL Charge speakers are so named because they have two-way charging. You can plug your phone charger into the Charge 5 to siphon power from its mighty battery, much like a power bank. It’s a nice touch for a speaker that’s meant to be used while you’re out and about. The speaker comes with two cables: a USB-A to charge itself, and a USB-C to charge your other gadgets.

There’s an app you can install on your phone or tablet, but it doesn’t do much. You can pair two Charge speakers in stereo mode, or several in “party mode”. But mostly, it’s only useful for receiving software updates and seeing battery level more accurately.

While the Charge 5 is plenty light enough to carry in one hand, it isn’t really meant to be held during playback. It vibrates too much, for a start. You’ll want to rest it on a flat surface, standing it on the discreet rubber base or on either end.

Sound quality is just as good while charging, so you can leave it plugged in 24/7 and treat it as a home speaker if you want. I’ve been using it to listen to music in my lounge all trial long. Why waste something this good by only using it outside the house?

✔ A built-in voice assistant (Siri) gives you hands-free control.
✔ Better 360-degree audio.
✔ Seamless interaction with other Apple devices and services, including Apple TV and AirPlay.
✔ Lower price.
✔ Excellent audio.
✔ Need an iPhone or iPad to set up.
✔ Average ease of use.
✔ Can integrate other Apple smart devices.
✔ Affordable.
To see how this model compares to other home speakers check our test results

Watching the HomePod Mini play made me realise I have no idea how audio quality works. I’d assumed that bigger speakers meant bigger drivers meant better sound. But the Mini sounds fantastic despite its 10cm diameter, even at volumes that make me want to apologise to my neighbours.

I simply don’t get it, but I suspect it’s less about hardware and more about real-time, on-device processing. The Mini uses algorithmic tricks to optimise audio output, in the same way iPhones produce better photos than their cameras should be able to take.

A note to get out of the way: the HomePod Mini is for households that already own Apple products. Either an iPhone or iPad is necessary to set it up in the first place, and it works so much better with Apple Music than any other streaming service. If you use Android, consider an equivalent speaker like the Amazon Echo.

Setting up the HomePod is simple – plug it in, wait for it to power on, and hold your iOS device nearby. You don’t need to fiddle with Bluetooth pairing, but it does take a little longer to connect it to your home WiFi. A pair of Minis can also be set up in stereo. In tandem, they can act as a quality substitute for a sound bar, but only if you have an Apple TV 4K media player. Otherwise, it’d be more useful to keep a second Mini in another room.

This speaker isn’t designed to be moved very often. It can’t run without mains power, and takes a while to reboot once you plug it back in. Plus, because you name it after a room in your house at setup, it might be confusing to shift it.

Physical controls are all via a single touchscreen on top of the speaker, which isn’t particularly easy to use. Volume adjustment has its own reserved area, but other commands require memorisation. For example, a triple touch returns you to the previous track – intuitive, right?

It’s much easier to maintain control by talking to the built-in voice assistant Siri, which is arguably the main job of the HomePod Mini. It’s a surprisingly good speaker, sure, but it comes into its own as a smart home hub. It can integrate with various Apple-approved smart things – lights, heaters, even door locks – through the Home app.

Cynically, I suspect Apple doesn’t make much profit off the $159 price tag. Instead, the HomePod Mini is supposed to make money by pulling you and your home further into the ecosystem via an Apple Music subscription or some HomeKit smart products.

We stand admiring fine exemplars from the two families of wireless speaker. Neither is better than the other – instead, which you should buy depends entirely on what you need.