Wish you could make pain go away with the click of a button? A product promising to do just that is being advertised on television and it can be yours for a mere $160.

Wish you could make pain go away with the click of a button? A product promising to do just that is being advertised on television and it can be yours for a mere $160.

Ads for the Pain Erazor pen claim it offers drug-free pain relief through “the science of electro-analgesia”. “Say goodbye to the suffering you experience when pain or discomfort strikes,” boasts the marketing material. “Fast, affordable, convenient & extremely effective!” it trumpets.

Eliminating your aches and pains with no pills or costly visits to a doctor sounds appealing, even too good to be true.

The Pain Erazor website offers a less-than exhaustive explanation of how this pocket-sized device delivers results. It claims the pen works by exerting pressure on a quartz crystal, which produces a tiny electric charge. This, according to the website, stimulates the body’s endorphins to act as a natural pain killer.

It’s true when some solid materials are put under mechanical stress, they produce an electric charge, known as piezoelectricity. These materials include quartz crystals.

But how could that treat your tennis elbow or aching back?

Electric currents can be used for pain relief – a process called transcutaneous electrical nerve stimulation (TENS). This type of treatment uses a small, battery-operated device that’s connected to electrodes placed on the skin. The device delivers small electrical impulses to activate opioid receptors in the spinal cord and brainstem.

University of Otago clinical senior lecturer Dr Bronwyn Thompson says a TENS current essentially “confuses” the information being sent from nerves to the central nervous system (spinal cord and brain) to activate the natural pain relief the body can produce.

The jury’s still out on whether TENS is a reliable method of pain relief. A 2015 review by the well-respected Cochrane Collaboration concluded there’s still a lack of good quality evidence and more studies are needed.

Brand Developers, the company marketing the Pain Erazor, claims the analgesia it provides is similar to TENS but has a “more effective, longer-lasting pain killing effect than a regular TENS unit”. It also says it “has been tested and deemed safe and effective for both acute and chronic pain”.

However, there’s no trial data in the 116-page book that comes with the pen or on the company’s website, which instead features a testimonial by a motorcycle stuntman. 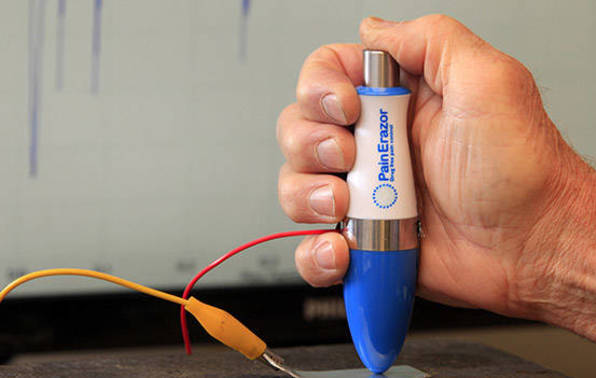 A click of the Pain Erazor pen produces a visible orange spark. Customers are warned not to use the pen near “oxygen or flammable liquids”. Instructions advise placing the pen on the point of pain and clicking the button 30 to 40 times.

Brand Developers described the pen’s power output as “negligible”. It said it had not published the exact charge, stating this would give “potential competitors and ‘knock-offs’” the information needed to produce copycat products.

Marketing of the Pain Erazor illustrates how little regulatory scrutiny these types of medical devices are given before being sold in New Zealand.

There’s no required pre-market assessment or approval process before a product hits shop shelves. The company supplying the product just has to register it on Medsafe’s online database, which isn’t open to the public. No studies have to be filed to support a product’s claims or prove its efficacy.

There’s no trial data in the 116-page book that comes with the pen.

Companies selling medical devices that claim to operate by inducing an electric force are required to tell customers in writing how much power the device puts out. This information wasn’t provided with the Pain Erazor we bought. Brand Developers initially refused to say how large the electric charge is, stating the information was “sensitive” intellectual property.

In 2015, the company was told to pull a TV ad for the pen after a complaint to the Advertising Standards Authority (ASA). The ASA decided the ad, which touted the pen as providing “fast, natural, effective relief for pain”, was misleading and the product claims hadn’t been adequately substantiated.

According to the ASA decision, the evidence Brand Developers submitted to support its pain claim was a literature review by a chiropractor. No double-blind, randomised clinical trials of the Pain Erazor were provided – the minimum we think could reasonably be expected to substantiate claims the product is “extremely effective”.

When we asked Brand Developers for evidence to back its claims, the company originally declined to provide any clinical studies. It then said it would only release the information if we signed a non-disclosure agreement. We declined to do so.

The report the company subsequently provided was an unpublished 2015 review by a Canadian chiropractor, which appears to be the same report provided to the ASA.

What is a medical device?

A medical device is any kind of physical object (such as an instrument, appliance or material) used on humans for therapeutic purposes. Unlike medicines, medical devices don’t work by pharmacological, immunological or metabolic means. Thousands of medical devices are used in New Zealand for many different purposes. Examples include pacemakers, orthopaedic implants, colostomy bags, diagnostic scanners, TENS machines and hearing aids.

How are they regulated?

Suppliers of medical devices have to register their products on Medsafe’s Web Assisted Notification of Devices (WAND) database. But being on the WAND database doesn’t mean Medsafe has assessed the device for safety or effectiveness.

Do companies face penalties if they don’t register a product?

Is anything being done to improve scrutiny of these products?

The government is working on a new regulatory regime to replace the Medicines Act 1981. This reform will cover medical devices. We’d like to see rules strengthened to require medical devices to be subject to pre-market approval. Evidence supporting health claims should also be publicly available. While companies face prosecution under the Fair Trading Act if they make misleading or unsubstantiated health claims, this only happens once a product is already on the market.