Two simple ways to save over 20% on your power bill

Timing when you run your appliances can save you a lot of money.

The price of electricity has increased about 4% this year, but some customers are saving 20% or more on their power bills by changing two things.

Playing the game pays the bills

Peter and Barbara live in Nelson with their two teenagers. The family bought an electric vehicle (EV) in April. As the vehicle uses electricity to charge the battery, naturally the couple thought their household’s power bill would go up. But to their surprise, their bill is actually cheaper now than it was before they owned the EV.

The reason for these savings?

Peter and Barbara are playing the game of timing their power use. They switched to a provider which offered a free hour of power. But soon they realised they should reassess their options now that they had an electricity-hungry EV. Checking which plan would suit their new circumstances, they changed to one that offers half-price night rates and they charge the EV overnight. Their provider has an app which Peter uses to monitor daily use. Their teens were already staying up late using a lot of power, so the change suited the family.

“On my old plan, I couldn’t tell you how much I was using per day – I had no idea. Whereas now I know, and I can see why certain days or times have cost me more,” Peter said.

“I used to put the dishwasher on straight after dinner because I wanted it all done so I could settle down for the night. But now I know that that’s the worst thing I could have done!”

Now Peter waits until later in the evening, after 11pm, to put on the dishwasher and pays half the price they used to for running it. That’s the difference between peak and off-peak power usage.

“All these little things add up. Electricity is a constant cost, you’re always using it, so why wouldn’t you save money where you can?” 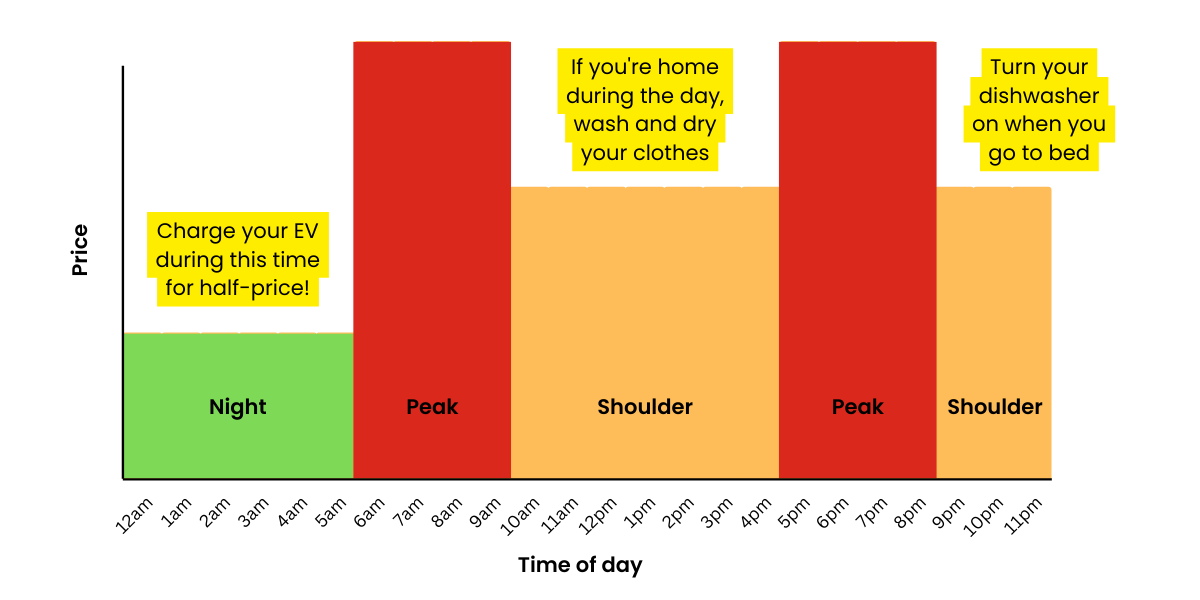 Some retailers offer what are known as ‘time conditional’ power plans. That’s a fancy way of saying the price of electricity changes depending on the time of the day you use it. Some time-conditional plans feature a defined period each day in which the electricity is free.

Other power companies offer ‘time of use’ (ToU) pricing. This is when residential prices are more expensive during peak busy times, such as after work when everyone gets home and starts making dinner and running appliances at the same time. Power is cheaper at off-peak times, when fewer people are using the network.

In between peak and off-peak sits the shoulder rate, which naturally falls somewhere between the two.

You can make this work for you by planning when you run power-hungry appliances like washing machines and dishwashers. Many have timer options so you can set them to run at the cheapest time.

If more people spread their power use across off-peak times, not only will you save money on your power bill, but you’ll also help reduce the need for larger electrical infrastructure to be built to keep up with that peak demand. Less strain on the system will keep the power costs down for everyone.

You can check with your electricity retailer whether it offers ToU plans, or try our Powerswitch website to compare retailer prices.

In this electricity market, you’re not rewarded for loyalty. It’s in your best interest to shop around every few years to see whether another provider can offer you a better deal. When it comes to electricity, it’s all the same quality so you might as well be getting the cheapest and most suitable deal for you.

How to make your power work for you

Washing machines, clothes dryers, dishwashers and hot water cylinders consume the most household power. Typically washing machines, dryers and dishwashers each use $1 of electricity per load. By running these appliances during off-peak hours or during your free hour of power, you can cut your power bill significantly.

Learn how to use your timer

If your cheap or free power is due to start in an hour, turn on the washing machine and use the delay function so it comes on when the low-cost power starts. A part of making your power plan work for you is learning to set and forget.

Powerswitch manager Paul Fuge uses a timer attached to his hot water cylinder to heat his household’s water during off-peak hours overnight, without the hassle of having to remember to get up each night and set it manually.

In winter, if you set your heaters to turn on and start warming the house before peak morning pricing (around 7am), you’ll wake to a cosy home and a lower bill.

Plug in electric bikes, scooters or electric vehicles overnight when charging can be half price (depending on your provider).

Make the most of your afternoons

Many power providers offer off-peak times between 11am and 5pm. If you’re at home during this time, pop the washing on or watch as much daytime telly and you like, guilt free.

Saturdays and Sundays cost less, so use these days to whip out the power tools and to get on top of that dirty clothes pile. If you want to be really savvy, consider batch-cooking meals to prep for the week ahead.

Be realistic – choose the right plan for your circumstances

It’s easy to get caught up thinking of all the potential savings and what you’re going to do with that extra moolah, but much like starting a gym membership with good intentions, motivation can lag over time as life gets in the way. Basically, don’t set yourself up to fail.

Picking a plan that doesn’t suit your household’s circumstances could backfire and end up costing you more. ToU plans won’t suit everyone.

For example, if you have a big family or young children, your household probably can’t wait until off-peak times to do the washing or run large appliances. Households with young children often go through clothing so fast they have the washing machine running all the time! In this instance, timing power use for off-peak times may not be feasible and switching your power plan to one that relies on ToU to save money could lead to you accidentally spending more if you’re not making the most of the cheap power on offer.

Students, however, often stay up late studying or socialising, so it would naturally fit into their schedules to utilise the cheaper off-peak hours by running large appliances at night when it’s cheaper, with minor inconvenience.

Be realistic with what is and is not possible for your household.

Get on the same page

As a household, your power bill is determined by everyone’s use, not just yours. If you’re eager to maximise your savings, discuss actionable steps with everyone in your household which will work for all. Avoiding peak hours may not be possible all the time, but if you're all on the same page, you're more likely to succeed in cutting your costs.

Use Powerswitch to shop around

Here are a few examples of time-conditional power plans. As always, it pays to shop around to find the best plan for your circumstances. Use our Powerswitch comparison website to find the best deal for you - it takes just a few minutes.

Octopus Energy – an established UK retailer now operating in NZ – offers a time-of-use plan, as does Flick Energy. Electric Kiwi's MoveMaster plan also has time-of-use pricing. Electric Kiwi offers its famous free ‘Hour of Power’, in which you get to pick the hour that best suits you (outside of peak times). Contact's Good Nights plan offers three free hours, from 9pm to 12am. Also, this Genesis plan offers EV owners half-price rates at night.

Wins like this are only possible with the support of generous members and donors like you. If you like what we’re doing, please help us keep the pressure on with a one-off or regular, tax-deductible donation or bequest.