Which diet is best for saving the planet?

The science tells us we need to slash the meat and dairy to help tackle climate change. But do you need to become vegan to make a difference or can you have your steak and eat it too?

Nearly one-quarter (24 percent) of Kiwis in Consumer NZ’s Sentiment Tracker said when it comes to food choices and grocery shopping, they want to increase their focus on making sustainable choices. Sixty-one percent wanted to maintain their focus.

So, what’s the best approach? Do you have to go full hog and forgo all meat and dairy or will small changes, such as embracing “meat-free Mondays” still make an impact?

A study published in 2020 in Environmental Health Perspectives looked at the greenhouse gas emissions of different foods and dietary patterns.

The University of Otago researchers developed a New Zealand-specific food emissions database for 346 commonly eaten foods . The database calculated the total emissions for each food and considered each part of the food’s lifecycle, such as farming and processing, transportation, packaging, warehouse and distribution and refrigeration needs for chilled products.

The climate impact of animal-based products in New Zealand was considerably higher than plant-based foods. Beef and lamb (ruminant animals) were the biggest culprits. Other meats (including processed meats), butter and shellfish were also high emitters, mainly due to the feed required to produce non-ruminant animals and fuel used to harvest seafood. 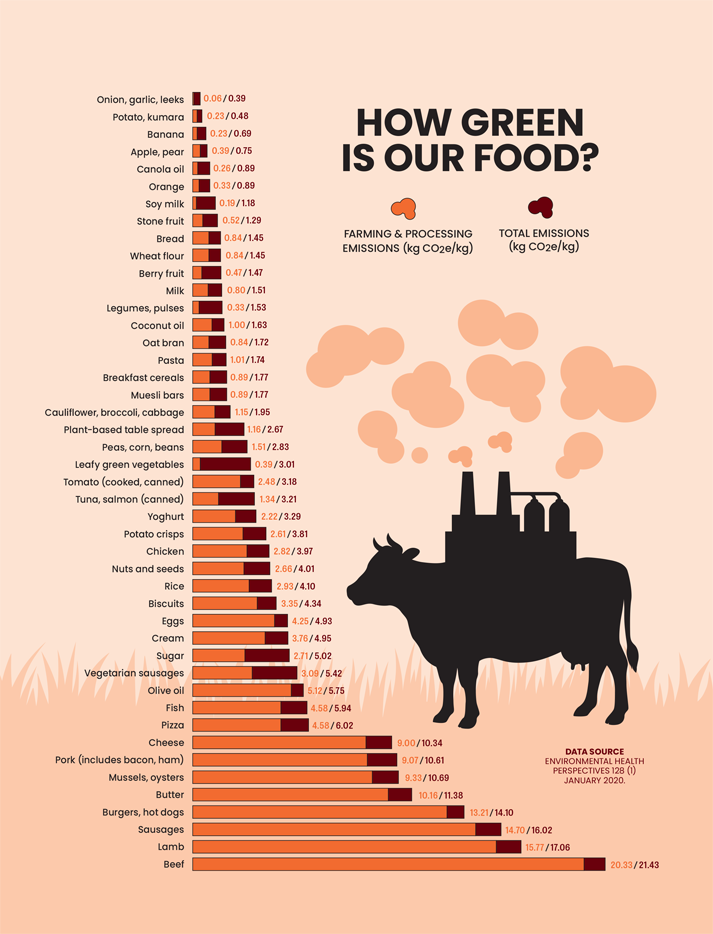 Senior author Alex Macmillan said despite arguments from the local beef and lamb sector that New Zealand red meat and dairy is more efficient than imported meat, there’s still a stark contrast between the climate impacts of plant foods versus animal foods.

Dr Macmillan said the main contributor to red meat emissions is the farming and processing component, with transport and packaging playing a much smaller part.

The study used the database to calculate the emissions associated with the typical New Zealand diet compared to 10 different scenarios with varying degrees of plant-based foods. It also calculated the impact of cutting out unnecessary household food waste.

The emissions associated with a typical New Zealand diet were 6.57kg CO2e (kg of carbon dioxide emitted) per person per day with 35 percent coming from meat, seafood and egg consumption and 24 percent from highly processed foods. Avoidable waste contributed 12 percent.

Following a vegan diet with no food waste had the biggest impact – it decreased emissions by 42 percent. Even making small changes such as eating one plant-based meal per week had a positive impact. Bigger changes such as replacing beef and lamb with nuts, seeds and legumes resulted in even fewer emissions.

The second study published in 2021 in the British Medical Journal Nutrition, Prevention & Health compared the cost and climate impact of four diets (with different scenarios) for a family of four over a fortnight. The diets included the current Kiwi diet based on national nutrition data, a diet that meets the New Zealand healthy eating guidelines (healthy diet), and two environmentally friendly dietary patterns – flexitarian (primarily vegetarian with occasional meat and fish) and vegan (no animal products). Alcohol and takeaways were not included in the comparison.

The vegan diet had the lowest average climate impact (203kg CO2e), followed by the flexitarian diet (263kg CO2e) and healthy diet (452kg CO2e). The current diet (597kg CO2e) was the worst for the environment - generating nearly three times the emissions of the vegan diet.

However, a greener diet comes at a price. The vegan diet cost on average $789 per fortnight – more than $200 more than the current Kiwi diet.

Cost and emissions for a family of four per fortnight

“However, within each diet scenario, we found food choices that could benefit people’s health, wallets and the climate and it’s possible to choose a vegan or flexitarian diet that’s cheaper than current diets. This included swapping meat for beans or lentils, adding hummus to your sandwich instead of meat, and including seasonal vegetables and wholegrains.”

Authors from both studies said these findings highlight the need for a wider sustainable food systems strategy including policies that ensure a healthy, sustainable diet is affordable for all New Zealanders, labelling schemes and the incorporation of climate considerations within Aotearoa’s dietary guidelines.

Dr Macmillian said we can learn from populations in Aotearoa who are already eating largely plant-based diets healthily as part of cultural traditions.

“We also need to understand more about the environmental costs and benefits of wild-hunted pest meat (goat, deer, pigs and possums) and the role it plays in health equity. For Māori and Pasifika communities, customary rights and practices in fishing and shellfish gathering also play important roles in health and wellbeing, as well as ensuring the sustainability of those food sources.”

In 2020, the Ministry of Health included a statement in its guidelines about sustainable eating. The guidelines described an eating pattern that is largely plant-based with moderate amounts of animal foods and small amounts of red meat. It also recommends choosing, preparing, cooking and storing food in a way that minimises wastage.

National research programme, Healthier Lives, has a project underway to identify policies that could be implemented to shift consumption towards more healthy and environmentally sustainable diets. Project lead Dr Cristina Cleghorn said the policies identified will be modelled to estimate their potential impact on population health, including impacts on inequities between Māori and non-Māori.

Dr Cleghorn said the project runs until June 2023 and she hopes policymakers will use the findings to implement new policies with health and climate co-benefits.

The beef with red meat and dairy

In 2019, the EAT-Lancet Commission (comprised of 37 experts from 16 countries) stated changing what we eat was the biggest step we could take to improving our health and the planet’s. The main food groups in the firing line were red meat and dairy products.

So, what’s the beef with red meat and dairy? According to the Ministry for the Environment nearly half of Aotearoa’s greenhouse gas emissions come from agriculture. The main culprit is the methane animals belch out (about three-quarters of agriculture emissions). Nitrous oxide from urine and dung from grazing livestock, use of nitrogen fertilisers, emissions from manure management and the palm kernel oil we import for supplementary feed also play a part.

“In New Zealand we have high rates of diseases that are associated with high levels of red meat and dairy intake, especially bowel cancer, but also obesity and heart disease. Eating more plants has health benefits such as reduced likelihood of heart disease, stroke, type 2 diabetes and bowel cancer.”

Dr Macmillan said meat and dairy should no longer be considered essential for health and wellness in policy and dietary advice.

“However, some groups, like pregnant women, teenagers and young children, may need special consideration if they’re ditching them. People following an entirely plant-based diet may need to supplement with vitamin B12.”