Tablet or powder? See which type tops our test.

Don't waste your money on a dud detergent. Find out which were best for removing six common stains, including red wine and baked-on cheese.

While tablets perform better than powders, their superior cleaning comes at a cost. The powders we’ve tested cost between 13¢ and 16¢ a wash, while tablets range from 30¢ a load up to 78¢. When you’re shopping for tablets, check how many each pack contains to make sure you’re getting value for money.

Rinse aid helps water spread evenly over the surface of your dishes, making droplets less likely to form and leave spots, and hastening drying. Almost all tablets claim to contain rinse aid. Powders often don’t have rinse aid as it needs to be released at a certain point in the wash.

Some products claim to be safe for septic tanks, but you should always consult your tank’s manual or manufacturer before using a new dishwasher detergent.

Buying detergent in larger packs often reduces the cost per wash. However, as they’re likely to be stored for longer, this increases the chances of moisture in the air causing tablets stick together and powder to clump.

To help avoid this, keep your detergent in an airtight container, unless the manufacturer’s packaging can be sealed completely. Keep the original packaging, as this can help with identification if someone ingests it or the product’s recalled.

Phosphates are bad for the environment. They promote algal growth in waterways, which chokes the natural vegetation. Until recently, it was common for phosphates to be used in household detergents as they help remove food and grease and soften water.

Phosphates are no longer necessary in dishwasher detergents, and none of our latest test batch contain them, according to their manufacturers. Instead they rely on enzymes and surfactants. Our testing shows this doesn’t affect their ability to clean, as the top-performing products for the past two years were all phosphate-free.

However, phosphates may still be in some detergents. Parallel-imported detergents, even when sold under the same name, might have a different formula and performance to those sold in supermarkets. Over the next few years it will become unnecessary to make phosphate-free claims, as it becomes accepted that dishwasher detergents shouldn’t contain them. 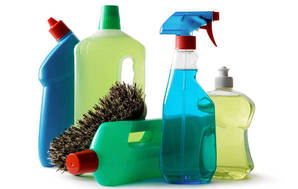 Don't waste money on cleaning products that don't do a good job. See which ones come out on top in our tests.