Fans of Crusty Demons are fuming over lack of refunds and poor communication.

Popular international motocross group the Crusty Demons have cancelled their New Zealand tour shows, just three weeks out from the scheduled dates. The call follows three years of postponements thanks to Covid-19, and now ticketholders are at their wits’ end trying to get refunds.

Crusty Demons’ management is directing all refund inquiries to the previous promoter, Capital Promotions Group. However, ticketholders say their emails are bouncing back and the phone number has been disconnected, leaving them unsure how they can get their money back.

The cancellation announcement was posted on Facebook on 8 October, with the first NZ show scheduled for 22 October.

Ticketholders have taken to social media expressing their growing frustration. Some said they had no idea about the cancellation until they stumbled across the Crusty Demons’ Facebook post and had received no direct notification. Others called it “a circus” and “a joke”.

One couple paid $245 for tickets in 2019, then Covid struck and the show was understandably cancelled.

“In the last three years they have set four new dates with them all being postponed,” the couple said. “But the last one that was supposed to go ahead in November has just been cancelled ... We are struggling to get in contact with anyone on how to get a refund. I am not sure where we go to from here.”

Ticketholder Cara reached out to us after being left out of pocket to the tune of $563.85. She purchased VIP tickets in 2019 as a Christmas present for her two sons, her eldest son's girlfriend, and herself.

“I was looking forward to taking them and enjoying the event together as I don't get to spend much time with them,” Cara said.

“What started as an exciting event for us to share has ended as false promises and a Christmas present they never received ... I feel disappointed, ripped off, let down and want ticketholders like myself to be told the truth, and how this is going to be resolved.” 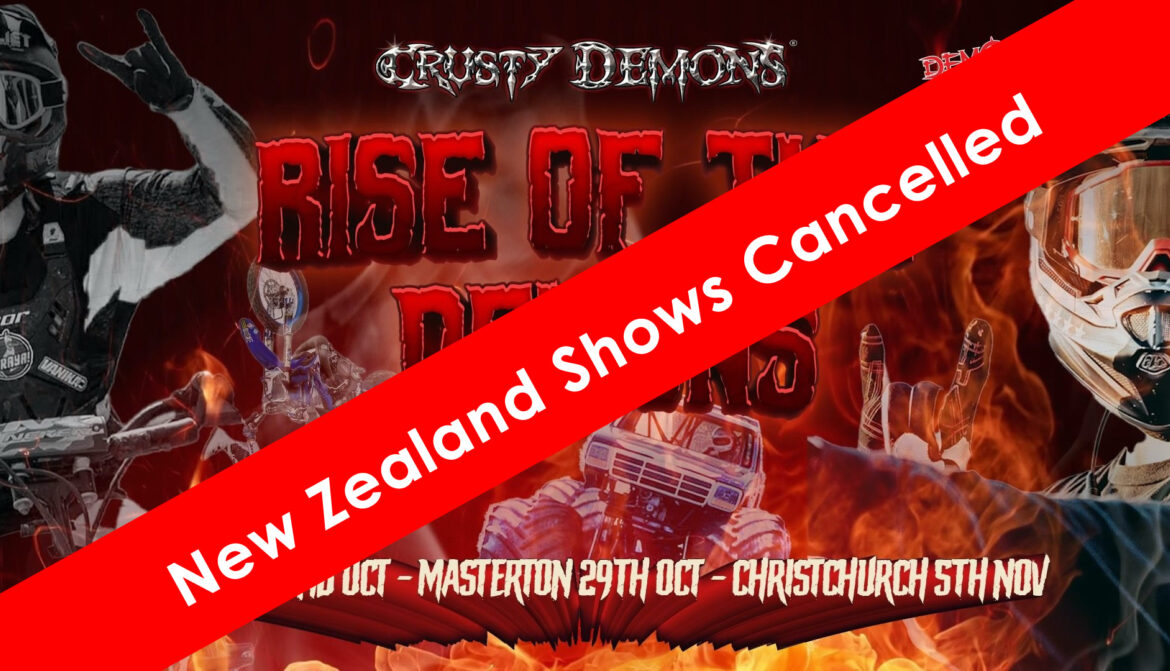 The shows’ NZ promoter, Complete Events Group, has a sole director, Matthew Philip Mahoney. He was also responsible for the Australian leg of the tour, which was also consumed by chaos, with some ticketholders driving hours only to arrive at an empty stadium, unaware that their show had been cancelled.

Mahoney is also a director of Capital Promotions Group (CPG), which operates in Australia.

Crusty Demons have released a statement on their website and social media platforms stating they are aware of the issues surrounding refunds of NZ tickets.

“We are saddened that there have been so many difficulties over the last three years regarding this tour,” they said.

They are directing ticketholders to Capital Promotions and name Matthew Phillip Mahoney as the individual to direct all inquiries to, regarding ticketing and refunds. They say Mahoney is responsible for all issues relating to the continuous postponement of the tour.

We contacted Crusty Demons for more information, but they only sent an automatic reply with the same statement.

Crusty Demons and Mahoney are both claiming the other party is responsible for the trouble surrounding the shows.

We contacted Mahoney and were surprised to receive a quick response, despite many others being unable to get in touch with him.

Mahoney claims that the tour was taken out of his hands by Crusty Demons’ ownership when he was notified on 29 August that Crusty Demons had chosen to go forth with a new promoter, No Limits Global, and cease operations with CPG.

Mahoney said he wrote back requesting a handover to ensure business continuity and maintain a seamless delivery of events, but did not receive a reply from Crusty Demons. He told Consumer NZ that CPG was not aware of the tour’s cancellation until the same time as the public, when it was announced on Crusty Demons’ social media platforms.

Mahoney says he will be pursuing legal action with Crusty Demons’ ownership and hopes to have this resolved swiftly.

“Although the cancellation was taken out of our hands by Crusty Demons’ ownership, we will be refunding all of these loyal customers, who deserved better than the short notice they were given.”

Mahoney said a statement from CPG has been emailed to all ticketholders via their ticketing providers explaining the situation, however the ticketholders we spoke with say they’ve received no such email, nor any replies to their attempts to get in contact.

“We do not have direct access to the customers’ details as that is held by the ticketing companies,” Mahoney said. “These emails would have been sent to the email address used for purchasing. They can also check their junk mail folders.

“We will be issuing full refunds via the payment method you used to pay for your tickets and through your ticketing provider. You will receive your refund in worse-case 45 business days and no action is required from you to receive the refund.

“This will allow us time to collate all detail changes as we have already received a high number of inquiries advising of detail changes.”

If you purchased tickets with AfterPay or your card details have changed, you need to fill out this form to update your details.

How to get a refund

If an event or show is cancelled or postponed, you are entitled to a refund of the ticket price, plus any booking fee and ticket insurance, from the ticket seller.

Promoters, ticket agents and event organisers must comply with the Consumer Guarantees Act (CGA). This means that they must carry out services with reasonable skill and care, which includes using reasonable care and skill for managing the booking process or organising the event. Learn more about your rights under the CGA.

If you do not receive a refund within the 45 days as Capital Promotions Group has stated and the situation can’t be resolved, you can take your case to the Disputes Tribunal.

If you’ve paid by debit card or credit card, you might be able to request a chargeback from your bank. You can apply for a chargeback if you paid for the ticket but the event hasn’t gone ahead, or if you were promised a refund, as is the case here, and it hasn’t been credited to your account. Let the bank know what’s happened and provide a copy of your correspondence with the ticket seller. There is a time limit on getting a chargeback. Ask your bank or credit card company about your specific situation. Read more about credit chargebacks.

If you think a retailer has misled you or taken payment from you without having reasonable grounds to believe it can supply the services on time, you can report the business to the Commerce Commission. The Commission doesn’t act on behalf of individuals and can’t investigate every complaint. But its investigations do help make sure businesses are complying with the law.

If you want advice specific to your situation, you can get in touch with us here. Consumer members can contact us to speak directly with one of our advisers.

Check out our guide to your rights under the Fair Trading Act.