Replacing the battery in your tech

Does the battery in your phone or laptop not last like it used to? Don’t overreact – here’s how you can replace it.

A rechargeable battery can only recharge so many times, due to chemical reactions that eat away at capacity with every charge. Once it’s deteriorated, tech companies would like to force consumers to replace the entire device. We can’t accept that.

Replacing your battery is best

Tossing a functional device into landfill is bad for you, because you have to pay for a replacement. But it’s worse for the planet – toxic heavy metals in tech, such as lead and cadmium, become environmental and health risks. Manufacturing your replacement device uses more metal, oil and energy. While you can recycle your old tech as e-waste to save a little energy and recover some materials, using it for longer is much better. If your phone has a spent battery, you should replace and recycle the battery and keep the device in use – but it’s not always that easy.

Manufacturers go to extreme lengths to stop you maintaining and repairing your devices. They’re often glued shut, making it tougher to open them undamaged and forcing you to reseal with your own glue. Apple uses a unique screw on iPhones and MacBooks to prevent you opening them with your own screwdriver. Companies want to maintain control over your tech, even for basic maintenance like a battery replacement. In our view, you’ve paid for it, so it should be yours.

If you’ve had a phone or tablet for a couple of years, you’ve probably noticed its battery life disappearing to some extent. That’s normal, but if it barely lasts half of what it used to or shuts off without warning when it drops below a certain charge, it’s due for a new battery.

A few years ago, it would’ve been an easy fix. Nearly every phone could be pried open, the battery easily removed and replaced. These days, nearly every device is glued shut, with a non-removable battery. You can get into them, but you need specialist equipment and a good tutorial. If you’re not confident enough to get your hands dirty, you’re often forced to use an official repairer, which can cost well over $100 for parts, labour and shipping.

Laptops and other devices

Laptop batteries usually last longer than those in smaller devices, but it depends on usage. Some laptops have easily replaceable batteries, as not all manufacturers have started gluing them shut. You can order a replacement battery online, but stick to official resellers or stores you trust – third-party batteries are cheaper, but can be unsafe.

For many smaller devices, replacing batteries isn’t commonplace as you’re expected to simply buy a new device. Wireless earbuds, such as AirPods, are emerging as the worst offenders because their small batteries wear out fairly quickly. The tiny devices are packed so tightly with components that even an official repairer can’t get in to replace the battery. Even worse, there’s no economic value in recycling them due to their size, so the products often end up in landfill. We don’t think that’s good enough.

If you feel your battery has died too early, you may be entitled to a replacement under the Consumer Guarantees Act. That’s good for you, but the only way to avoid the environmental damage is to not buy them in the first place.

So you’ve replaced a battery?

Great work! Now, whatever you do, don’t throw the old one in the rubbish. It could catch fire and, besides, have you been reading this article?

Where you can drop it off for recycling depends on where you live. Find out about household battery recycling.

If you want to make your own repairs, you need detailed instructions and the right tools. A good place to start is iFixit.com, a wiki site full of crowd-sourced guides that show you how to repair and maintain your devices. The site also sells quality spare parts and all the tools you need – even screwdriver bits to counter those pesky tamper-resistant screws.

Replacing a battery is much better than throwing out a device, but it’s even nicer if you don’t need to do either. Advice for looking after lithium-ion batteries might surprise you, and even contradict how you maintained older styles of battery. Here are our three big tips:

So your battery's dead. What can you do? 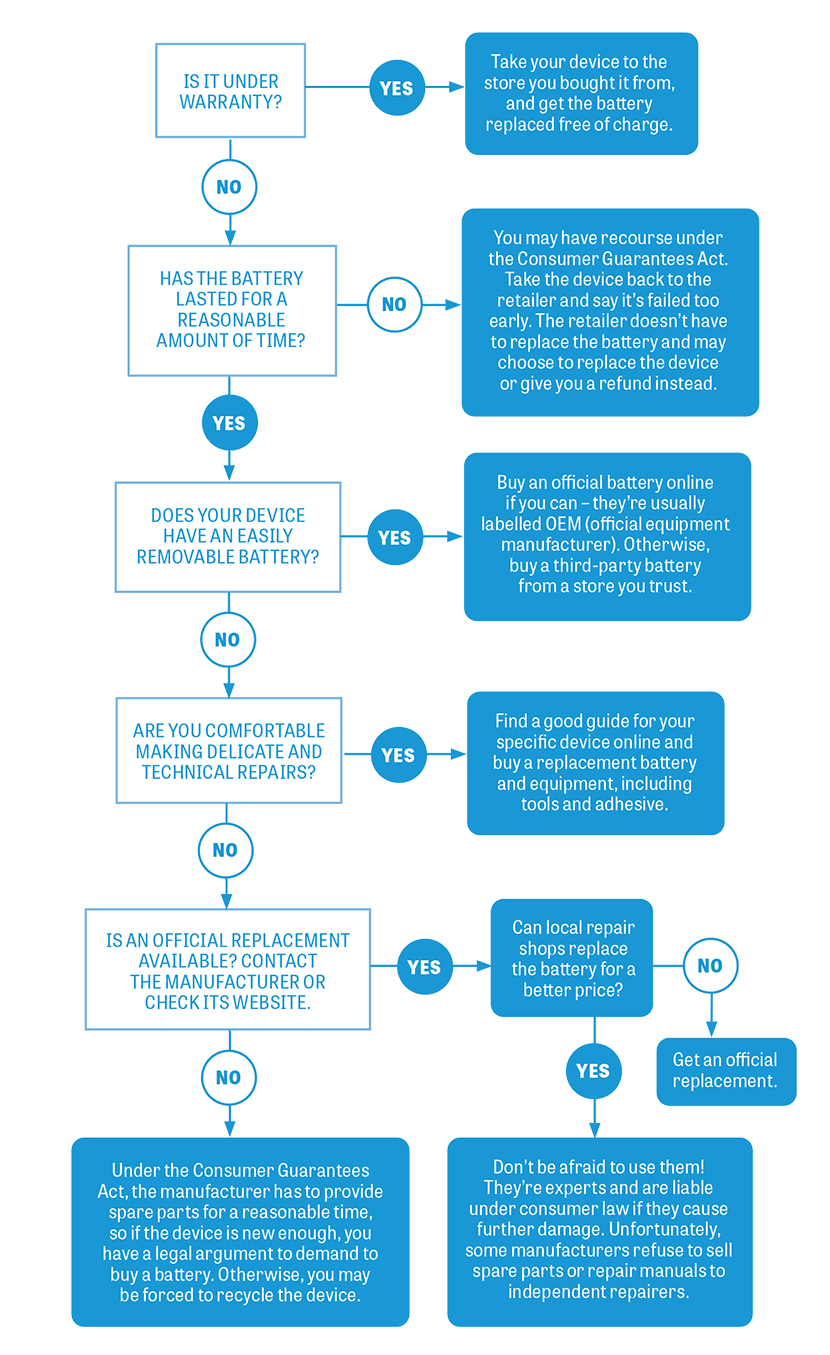