Find the right mower for your needs.

Before diving into our test database, consider the pros and cons of each power source. This will help you home in on the ideal model for your lawn and budget.

While we don’t recommend mowing grass when it’s wet, petrol mowers are better than battery models at packing the catcher if the turf’s damp.

Most petrol mowers, even budget models, can mulch. This means they come with a plug you chuck in the catcher chute to recirculate clippings through the blades, turning them into a fine mulch.

Modern petrol mowers have dual-purpose blades (catch and mulch), meaning you only have to add the plug to convert between modes.

Petrol mowers are harder to use than electric models. Most still have a pull cord start, which can take a few yanks to get going when it’s cold. They’re also much louder and produce fumes (though modern four-stroke models are quieter and run much cleaner than old two-strokes, and you don’t need to mix petrol and oil). Petrol models are heavier and more difficult to manoeuvre than electric models.

You can buy one of our recommended petrol mowers for less than $500, though you’ll pay at least $900 for a self-propelled model.

Petrol mowers generally offer the widest range of cutting heights, from 10/15mm up to 80/100mm. Be aware some mowers manufactured overseas, such as the American-made Toro, only cut down to 25mm. Kiwi or Aussie petrol mowers, such as Masports, Victas and LawnMasters, let you get as low as 5mm or 10mm.

A big drawcard of petrol mowers remains their infinite running time as long as you’ve got fuel in the tank.

The four-stroke engines powering petrol lawnmowers operate at high temperatures and can have the same mechanical issues as cars. They require regular maintenance and servicing, including spark plug and oil changes. However, modern petrol mowers are relatively reliable. Our latest appliance reliability survey found 83% of petrol mowers owned by members had never needed repair.

Battery-electric mowers produce less torque than petrol models, but our recommended models are more than powerful enough to give most lawns a clean, even finish – and they have sufficient power to tackle the longish grass that develops after you’ve let your lawn go for a few weeks. You’ll only notice the power disparity compared to petrol in grass that’s damp or very long (for example, 200mm-plus), or when thatching and weeds are in the mix.

Most of our recommended battery mowers are mulch and catch. And their performance is often as good as their petrol counterparts. The snag is a mulching battery-electric model costs a lot more than most petrol mowers.

Most battery-electric mowers are 10kg to 15kg lighter than their petrol equivalents, making them much easier to haul out and shove around. They’re also quieter, have lower levels of vibration, and start at the push of a button. However, the most powerful battery mowers weigh more than 20kg, making them not much lighter than many petrol mowers.

One of our top-scoring battery-electric mowers will set you back at least $800. With a battery mower, you’re essentially paying your running costs upfront. You avoid paying $50 to $100 in petrol each summer (they cost about 10¢ to recharge at most), and there’s little in the way of maintenance. A bonus is all cordless mowers are part of a family of outdoor power gear, meaning their batteries will work in other products within that range, such as blowers and line trimmers, saving you money on your next tool as you only need to buy the “skin” (tool excluding battery and charger).

Cordless mowers don’t generally cut as low as petrol models, only getting down to about 20mm, although Australian battery mowers such as the EGO or Victa go down to 15mm – the lowest battery cutting heights we’ve seen for cordless.

The limiting factor for cordless models is that even the best only have about 60 minutes’ mowing before needing to recharge, which can take more than an hour. On larger properties, you might need to break your mowing in two or pay another couple of hundred dollars for an extra battery. However, some retailers are including two batteries in their cordless mower kits.

Battery-electric mowers have fewer moving parts than petrol mowers, so they’re more reliable: 84% of our members with a battery mower said it had never needed repair. Of those that had, the majority of failures were batteries conking out. This isn’t surprising as batteries gradually lose capacity and need replacing after three to five years of regular use. Aside from blade-sharpening, this is the only major ongoing cost associated with these mowers.

Our testing has shown that electric lawnmowers are outperformed by battery and petrol units. This means they give a more ragged cut than other mowers, and struggle when the going gets tough. However, for small patches of turf within reach of an extension cord, their low cost makes them worth considering.

Mains-electric mowers are generally cut or catch only (“cut” means mowing without a catcher or mulching plug, so thick clumps of grass are returned to the lawn surface). However, some mains models, such as the Flymo Turbo Lite hover mowers, cut quite finely on the first pass and recirculate some of the clippings through the blades, offering a pseudo-mulching effect.

Corded mowers are the lightest of the lot. They’re also quiet and easy to start. However, dragging a power cord can be a hassle. Always use an RCD (residual-current device) plug to avoid a shock if you cut the cord.

Corded mowers are the cheapest type aside from hand mowers; you can land a decent model for $300 as they’re simple beasts with no expensive battery, charger or engine.

Generally, mains-electric mowers don’t cut as low as petrol models, though Flymo hover mowers go down to 10mm (but they won’t give you as fine or even a cut at this height as a petrol mower).

Mains-electric mowers theoretically have no run-time limit. That said, you’re limited by the extension cord and they’re not designed for big jobs, so can overheat if used for long periods.

With no batteries and very few moving parts, it’s unsurprising mains-electric mowers are the most reliable type.

Hand (push) mowers are a cheap form of exercise and you're not burning fossil fuels. But they're not practical for large or sloping lawns.

To get a consistent cut with a push mower, you need to keep the blades sharp and properly adjusted. Resharpening the blades means a visit to your local mower shop.

A turned-up handle is generally regarded as easiest to use. Adjustable height is also an advantage, although it's not as common as you might think. The handles should fold easily for stowing.

Located on the handle bar for quick and easy access. It shouldn't be stiff.

Look for a large number of cutting positions. It should be easy to change the position using one lever acting on all four wheels.

Catchers can be either solid plastic or partly mesh. Rigid plastic is heavier, but stronger than the mesh type, which can also allow dust to blow over the user. The catcher should have two handles, one for carrying and the other for emptying. It should be easy to remove and replace.

Petrol engines need servicing just like a car. How easy will it be to change the oil, air filter and spark plug on your beast? You need to keep an eye on the oil level and service it according to the manufacturer’s instructions. At the very least, you should change the oil annually.

Look for a hole on top of the body, designed for you to connect a hose to, for easy cleaning underneath.

There's no such thing as a quiet petrol-driven mower, but some are noisier than others. Check the vibration as well.

Mulching mowers have a specially shaped cutting blade and a catcher-chute plug.

With the catcher removed and the plug inserted, the clippings are spun under the body and chopped up further by the blade. They are then blown down into the lawn, leaving a smoothly mown surface.

For successful mulching, the grass can’t be too short or too long. Cut too short and there won’t be a carpet of grass for the mulch to sink into and decompose. Left too long after cutting and the mulch will form clumps on the lawn – especially if the grass is wet. As well, the length of the cut shouldn’t be more than 25mm. 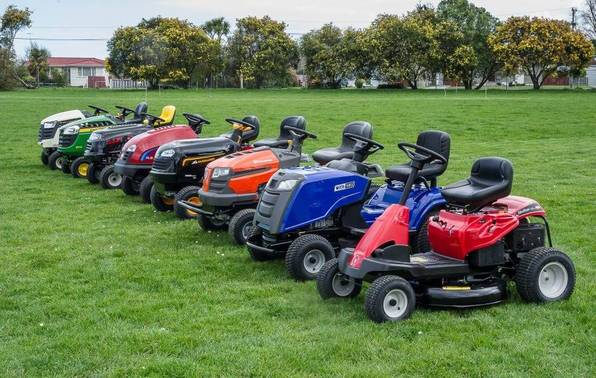 Bought a few more acres than a regular mower can handle? Ride-on mowers cut a wide swathe of grass – anywhere from 700mm to over 1 metre. Which brands are most reliable?

We've tested 44 lawnmowers.
Find the right one for you. 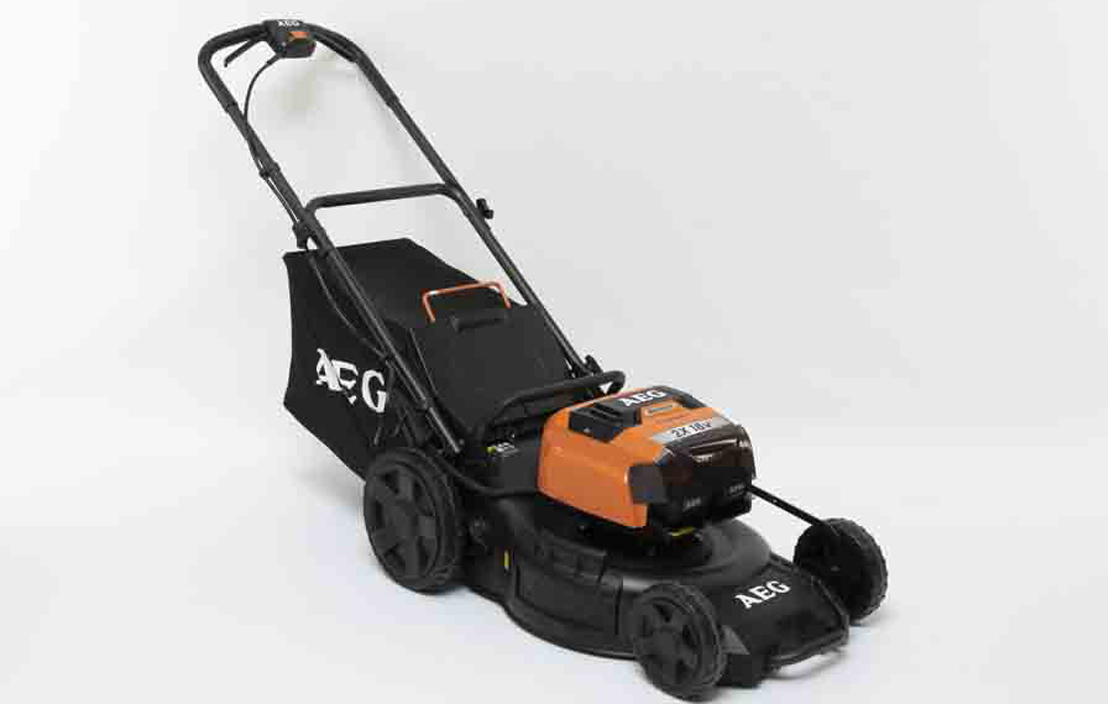 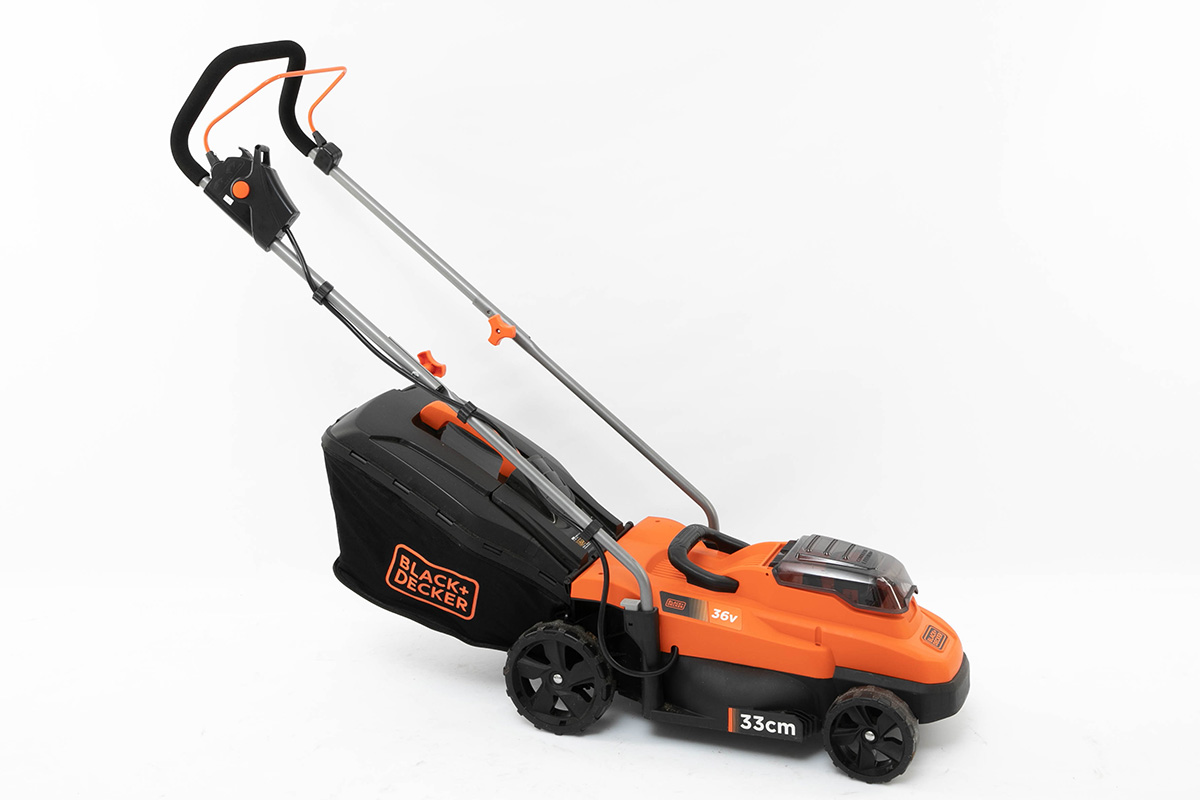 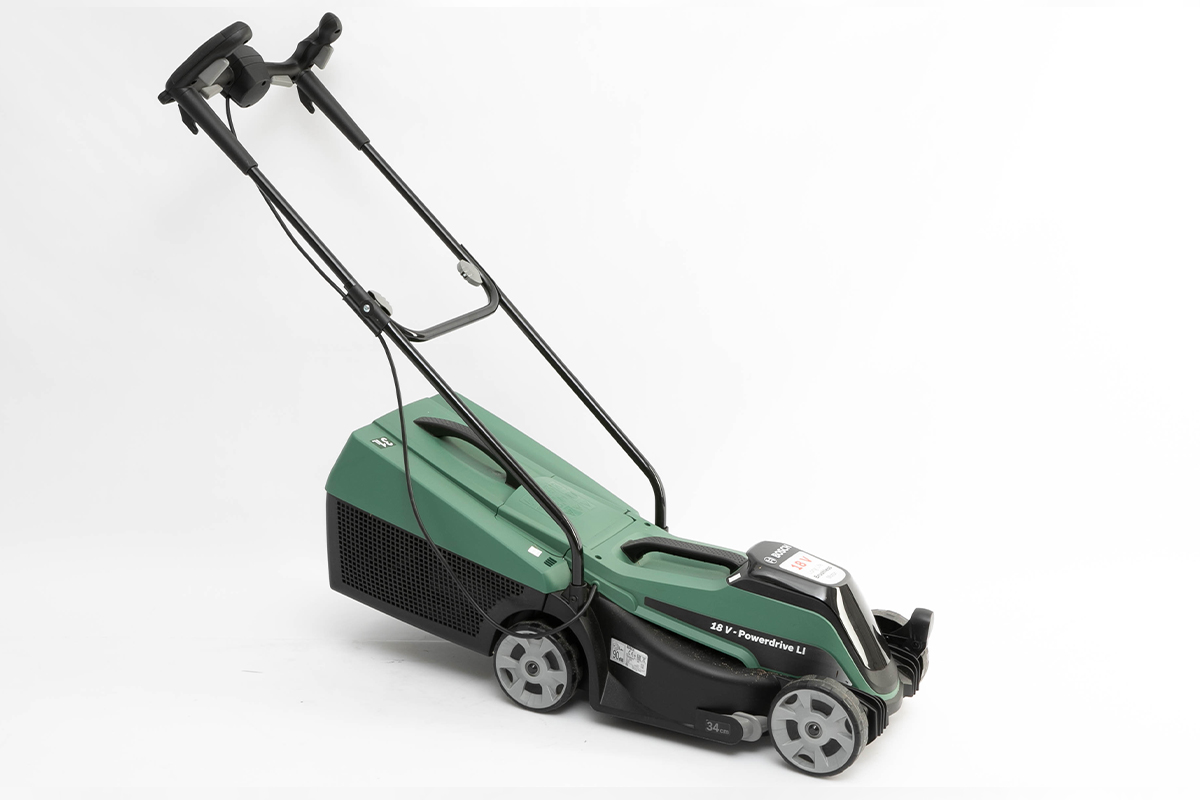 For cordless models, price is shown for kit including battery and charger.
Bosch
CityMower 18 (with 4.0Ah battery and fast charger) 0615991FJ9
Unlock scores and recommendation
This field should be left blank