Faulty kettles: what can you do?

Electric kettles are simple: A jug holds water, a resistance element heats the water, and a switch turns the power on and off. A handle and spout make it easy to fill and pour water, a lid keeps water inside the jug, and a filter keeps everything except water out of your tea.

So, given they’re such basic appliances, results from our latest reliability survey left us scratching our heads: 12% of kettles had developed a fault less than five years from new. We’d expect even the cheapest kettle to last at least five years of household use. To find out why many aren't going the distance:

The anatomy of a kettle 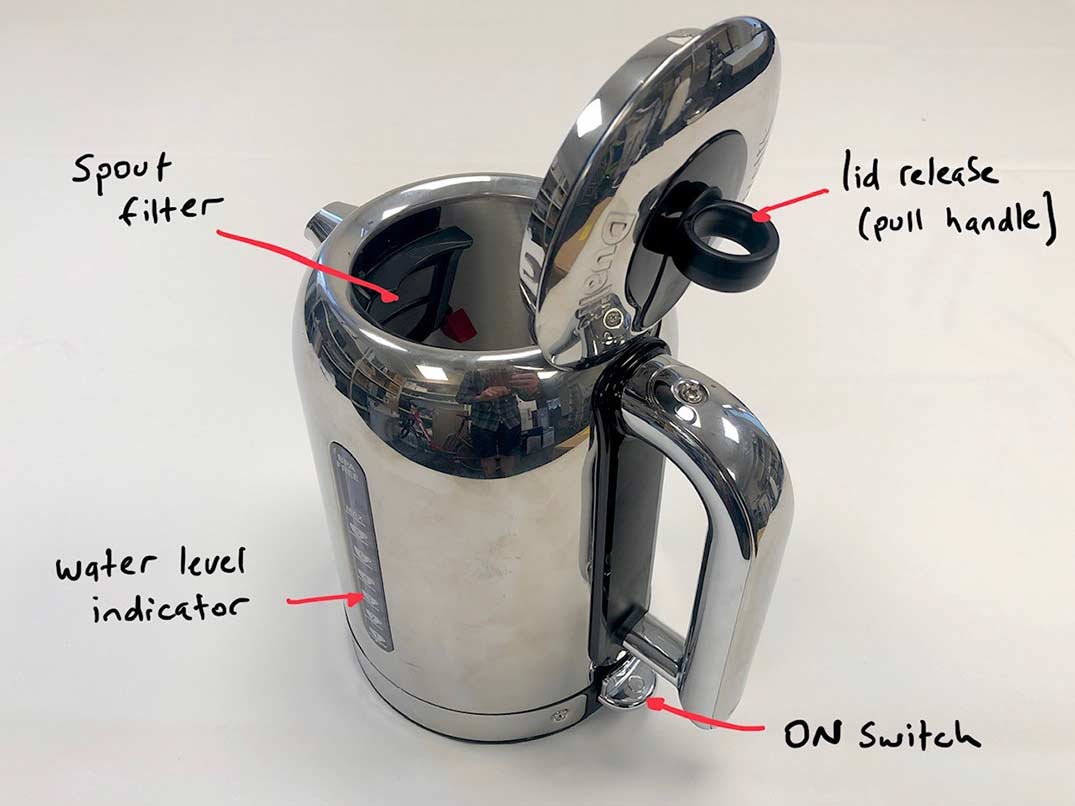 An electric jug is a plastic, stainless-steel or glass container that holds water. It has a handle so you can lift it and pour water. A spout means water pours in a controllable stream. A jug copes with repeated temperature changes from about 10°C to 100°C. If the jug is opaque, a water fill indicator is useful – a common solution is bonding a clear plastic window into the jug. Most jugs have a metal gauze filter over the spout to prevent foreign objects entering your tea. 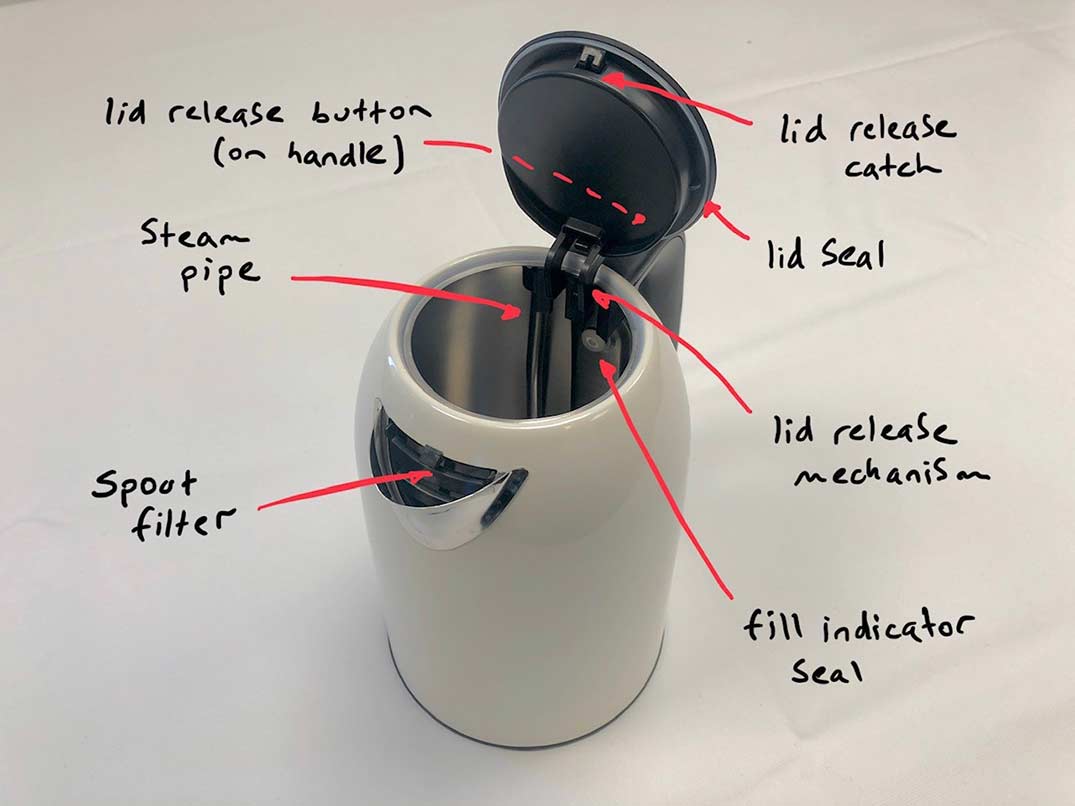 The lid reduces boiling time, prevents hot water splashes, and keeps steam inside the kettle, not your kitchen. The lid is critical to the auto-off feature – when closed, steam is diverted down a pipe to a thermostat that senses boiling. Most lids are hinged and opened by pulling a handle, or released by pressing a button in the handle and opened by a spring. A rubber seal inside the lid prevents leaks. 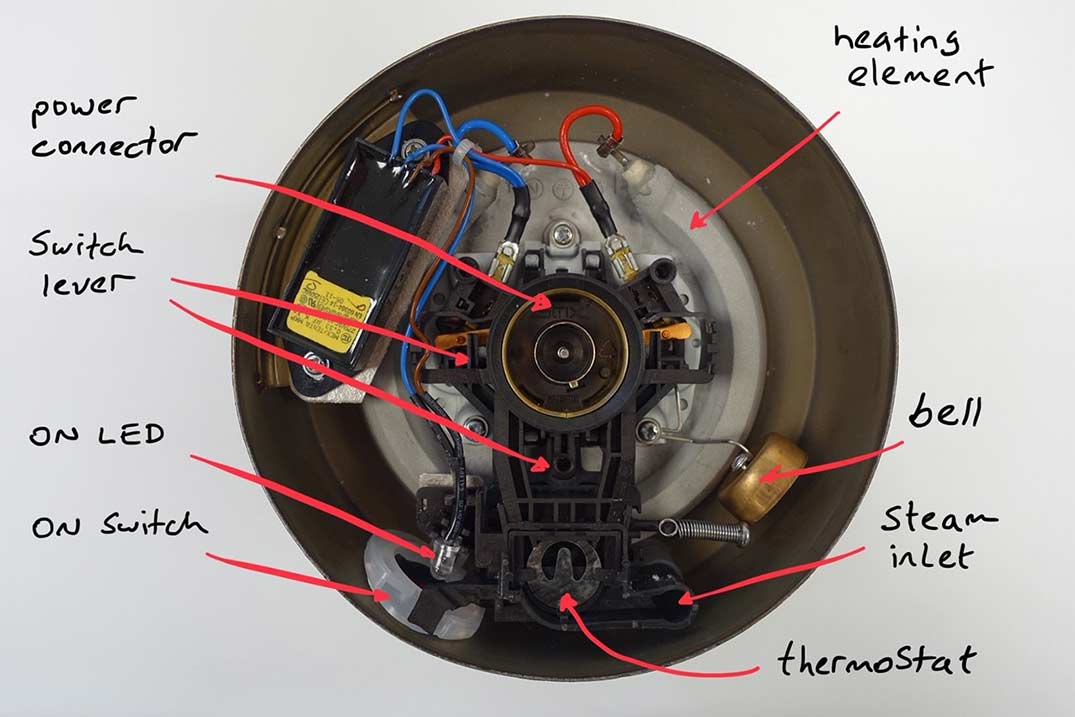 A paddle or rocker switch turns on the kettle. An LED is often used to show the kettle is operating. The switch operates a sprung lever that closes an electrical circuit to connect power to the heating element. An automatic mechanism turns the kettle off. There's a steam vent and tube leading down from the top of the water chamber to a bimetallic thermostat. When the kettle boils, steam whooshes down this tube. It heats the thermostat and makes it flip open, switching off the heating element and stopping the water from boiling. Some models have a small bell that rings when the contacts disengage. Kettles that heat water to a user-selectable temperature (below boiling) use a more complicated electronic switch and thermostat.

A resistance heating element converts electrical energy to heat energy. The element is usually hidden under the bottom surface of the jug.

A jug sits on a circular base that plugs into a wall socket via a power cord. It is powered when inserted on to a circular connector at the centre of the base. The connector allows the jug to rotate 360°, so the handle is conveniently placed.

In July 2019, we surveyed our members, supporters and Facebook followers about their faulty kettles (we defined a fault as something that meant the kettle didn’t work as it did when new). We gathered data from more than 300 survey participants.

Leaks were the most commonly reported problem, present in a third (33%) of faulty kettles: our survey respondents told us kettles leaked from around the handle, base, lid, spout or the fill-level indicator. So just about anywhere.

In 24% of faulty kettles, the lid wouldn’t stay closed (or would pop open during boiling), or the button or handle to open it failed.

Problems with the lid led to another common fault: a kettle that wouldn’t shut off – 15% of them kept boiling away.

Not shutting off is one thing; not turning on is another. Thirty percent of faulty kettles wouldn’t operate. The ON switch of some kettles wouldn’t stay on, or broke off. Others had power, but didn’t heat water – the element or connections to it were at fault. And, frustratingly, some just stopped working – a few owners reported their kettle went out with sparks and a bang!

Broken plastic parts caused problems in 12% of faulty kettles. Plastic deteriorates over time, particularly if it’s subjected to many cycles of heating and cooling. Owners reported cracking fill-level windows (some said plastic bits ended up in the water), parts of the lid or handle that broke off, or the spout filter falling out or breaking.

Of more than 300 faulty kettles, about a fifth (18%) of them were still being used, while a similar proportion (20%) got replaced under warranty or CGA. Almost half (49%) became e-waste. Just 4% were repaired.

Successful repair needs parts and knowledge. We searched online for spare parts and instructions, and we asked kettle manufacturers if these were available for their products. The results were underwhelming.

We found kettle parts available at non-authorised resellers, such as needapart.co.nz and similar overseas websites. The most commonly available parts by far were replacement filters and power bases. However, we couldn’t find spare seals, power buttons, lid mechanisms, level-indicating windows, thermostats or ON/OFF mechanisms for any popular brands. The availability of parts was hit and miss depending on the kettle brand and model – mostly miss.

What options do manufacturers offer?

We contacted Breville, Dualit, Kmart, Russell Hobbs and Sunbeam in New Zealand and asked them what kettle spare parts were available, whether they supported self-repair, and if they supplied manuals and guides to assist owners attempting repair.

Dualit was the only brand to offer a broad range of spares, which included a lid assembly, hinge kit and element, along with the usual power base and water filter parts. However, Dualit told us only parts not requiring dismantling (the filter and power base), can be replaced by the consumer. All other repairs should go through an authorised repair agent. The local Dualit website lists its authorised service agents.

Sunbeam’s New Zealand website lists a network of authorised repair agents. Sunbeam said “for the most part, a kettle would be considered a fully sealed unit and therefore non repairable/serviceable by the user”. However, it does supply replacement water filters (costing about $4+GST) and will swap out a faulty power base rather than replace the entire kettle.

The local Breville website has a prominent section for “Parts & Accessories”. However, the only spare “part” for any of the 18 kettle models listed is a bottle of cleaning liquid. The website states: “Only Breville's registered service agents are permitted to carry out professional repairs on your faulty Breville appliance.” Breville said they supply power bases and filters for consumer replacement, along with troubleshooting information and repair advice for customer-replaceable parts. Internal service components and procedures are only available to authorised service partners.

Russell Hobbs has no repair, service or parts information on its website and it said it doesn’t send instructions for repair to consumers. A limited range of spare parts, mainly filters and lids, are available. Products must be returned for warranty repair. However, if the spare part required was a lid, filter or base, it would be sent directly to the consumer.

The Kmart website has no repair or service information for consumers. Kmart said “we do not offer spare parts or warranty repair service for any kettles sold at Kmart. It is not possible to do so within our everyday low pricing model”.

Kettles are simple, yet one in 9 doesn’t see its fifth birthday. Most fail due to faults with the lid, leaks or power. Only a tiny fraction of faulty kettles are repaired (4% in our survey) and it’s usually cheaper for a manufacturer to replace a ‘junked’ jug, rather than repair it. Even a non-catastrophic failure like a broken lid can mean goodbye kitchen, hello e-waste.

It doesn’t need to be this way. Manufacturers could use better design and materials where it matters, to minimise common failures and make those that do happen repairable. Stewardship rules would incentivise durability and repair, as manufacturers would be responsible for the end-of-life cost of their products.

Retailers have a role, by stocking better products and spare parts. And we’re no saints — we need to stop buying disposable kettles. An “everyday low priced” jug is worthless when it becomes landfill long before its time.

Here’s how three middle price-point brands fared in our faulty kettle survey (we didn’t get enough responses to report on Dualit or Anko models).